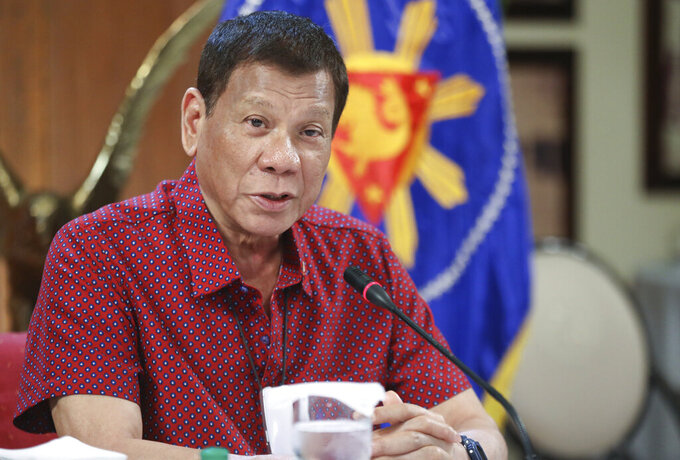 FILE - In this May 28, 2020, file photo provided by the Malacanang Presidential Photographers Division, Philippine President Rodrigo Duterte, talks during his speech at the Malacanang presidential palace in Manila, Philippines. The U.N. human rights office called on the Philippines government in a new report Thursday, June 4, to end all violence targeting suspected drug offenders and to disband private and state-backed paramilitary groups which have caused serious human rights violations in the country.(Ace Morandante/Malacanang Presidential Photographers Division via AP, File)

GENEVA (AP) — The U.N. human rights office called on the Philippine government in a new report Thursday to end all violence targeting suspected drug offenders and to disband private and state-backed paramilitary groups.

The U.N. rights office chronicled long-standing concerns about state-backed and vigilante violence that it says has worsened in the Philippines under President Rodrigo Duterte, who has particularly drawn domestic and international condemnation for a deadly crackdown on drug offenders and users.

“A heavy-handed focus on countering national security threats and illegal drugs has resulted in serious human rights violations in the Philippines, including killings and arbitrary detentions, as well as the vilification of dissent,” the report said.

It said many of the human rights concerns “have become more acute in recent years” and have continued even amid COVID-19 outbreaks.

Police raids “were routinely carried out without warrants” and post-operations reports indicated that evidence may have been falsified. The report cited a study of 25 drug operations in metropolitan Manila between August 2016 and June 2017, which showed that “police repeatedly recovered guns bearing the same serial numbers from different victims in different locations,” suggesting some victims were unarmed when they were killed.

The report, requested by the U.N.-backed Human Rights Council, is based on nearly 900 submissions as well as government input, court and police records, and interviews with victims and witnesses.

It noted that official figures have documented more than 8,663 people have been killed since the government’s campaign against illegal drugs began four years ago, “with some estimates putting the real toll at more than triple that number.” The Philippine National Police placed the death toll of what officials call the “drug war” at more than 5,600.

The report also noted killings of and threats against human rights defenders in a country known for a vibrant civil society, and pointed to prosecutions of journalists.

“Unfortunately, the report has documented deep-seated impunity for serious human rights violations, and victims have been deprived of justice for the killings of their loved ones,” said U.N. High Commissioner for Human Rights Michelle Bachelet.

“People who use or sell drugs do not lose their human rights,” she said.

There was no immediate comment from Duterte or the police. But they have stated in the past that there is no state policy condoning extrajudicial killings in the crackdown. The tough-talking president, however, has repeatedly threatened drug traffickers with death and produced a list of suspects, including local politicians, some of whom were later killed in still-unsolved attacks.

The report urged the repeal of a police circular that launched the deadly campaign against illegal drugs in 2016 and repeatedly used the terms “negation” and “neutralization” of “drug personalities.”

“Such ill-defined and ominous language, coupled with repeated verbal encouragement by the highest level of state officials to use lethal force, may have emboldened police to treat the circular as permission to kill,” the report stated.

Duterte has also threatened independent investigators looking into the killings and barred them from entering the Philippines.

Ahead of the report, the Philippine diplomatic mission e-mailed a letter from Ambassador Evan Garcia to reporters in Geneva saying his government “has always maintained a positive approach to addressing claims and allegations and investigating claims of violations, on the basis of facts.”

It included a May report by the government on human rights in the Philippines. It said that popular support for Duterte and his administration were “inconsistent with the picture of systematic and widespread human rights violations and civil society crackdown being painted of the Philippines in the international community.”

An independent poll, however, showed that 76% of Filipinos stated that there were many human rights abuses, including extrajudicial killings, in the campaign against illegal drugs. The poll also stated that 73% said the number of illegal drug users had fallen since Duterte took office in mid-2016.

The Social Weather Stations surveyed 1,200 people from Dec. 13-16 in a nationwide poll that has a margin of error of 3 percentage points.

In July last year, the Human Rights Council voted 18-14 with 15 abstentions to approve a resolution asking Bachelet to prepare the comprehensive report on human rights in the Philippines. Duterte reacted angrily by ordering the suspension of talks on any loans and grants that might be offered by the 18 countries that backed the resolution, particularly Iceland, which spearheaded the call for an investigation into rights conditions in the Philippines.