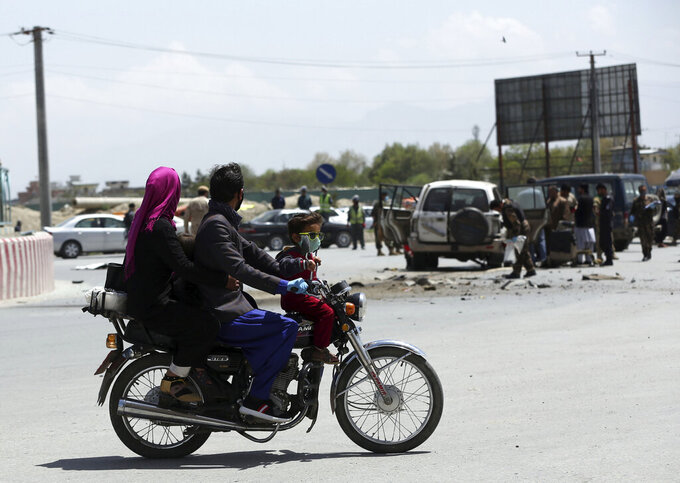 A man rides his motorbike near the site of a bomb explosion in Kabul, Afghanistan, Monday, April 27, 2020. Kabul police said a sticky bomb attached to a vehicle detonated in the capital but caused no casualties. (AP Photo/Rahmat Gul)

KABUL, Afghanistan (AP) — A report by the U.N. mission in Afghanistan on Monday noted a drop in the number of civilians killed in violence in the first three months of this year, compared to the same time last year, but underscored the still heavy toll the conflict continues to inflict on the civilian population.

The report said 533 people, including 152 children, died due to the fighting in the war-torn country in the first quarter of 2020, and hundreds more were wounded. That represented a 29% decrease, compared to the same period in 2019, and the lowest death toll figure for a first quarter of a year since 2012.

The report came as the Kabul police said a sticky bomb attached to a vehicle detonated in the capital on Monday but caused no casualties.

According to the report, the Taliban and other anti-government militant groups, such as the Islamic State group's affiliate in Afghanistan, were responsible for the majority of the civilian casualties during the first three months – or 55%. The Taliban were responsible for as many as 39% of civilian casualties, the report said, an increase by 22% compared to the same period last year.

Taliban spokesman Zabihullah Mujahid rejected the U.N. report as an attempt “to cover up daily crimes against civilians committed by U.S. and Afghan forces."

“Afghans are witnessing that most of the civilian casualties are due to indiscriminate bombings, rocket attacks on villages and towns as well as raids on civilian homes," Mujahid said.

The U.N. report said Afghan forces and their allies were responsible for 32% of all civilian casualties during the first quarter of 2020. The report also said that pro-government forces were responsible for more child casualties than the Taliban and other militants and over twice as many child deaths — mainly due to fatalities inflicted during airstrikes and indirect fire during ground operations against militants.

Children and women continue to be disproportionately impacted by the violence, it said, adding that the U.N. mission documented that 152 children and 60 women died in violence from Jan. 1- March 31.

The report also highlighted a disturbing increase in violence in March, when it was hoped that the Afghan government and the Taliban would start negotiations after a peace deal that was signed by the Taliban and the U.S. at the end of February.

The U.N. mission in Afghanistan is especially concerned about the escalation in violence in March and increasing civilian casualties, the report said, an in particular, about the uptick in civilian casualties last month as a result of operations by Afghan forces, mainly ground engagements, indirect fire and airstrikes.

The U.N. report came a day after Zalmay Khalilzad, the U.S. peace envoy to Afghanistan, called on the country’s feuding leaders to set their differences aside to combat the coronavirus pandemic and COVID-19, the illness caused by the virus, and advance the stalled U.S. deal with the Taliban.

Deborah Lyons, the U.N. chief's special representative for Afghanistan, echoed that appeal, saying she called “on all parties to seize the opportunity" and “to focus collective efforts on fighting a common enemy, the COVID-19 pandemic.”

“To safeguard the lives of countless civilians in Afghanistan and to give the nation hope of a better future, it is imperative that violence is stopped with the establishment of a cease-fire and for peace negotiations to commence,” she said.

Afghanistan has reported 1,703 cases and 57 deaths from the coronavirus.