UN summit in December to push action on COVID-19 pandemic 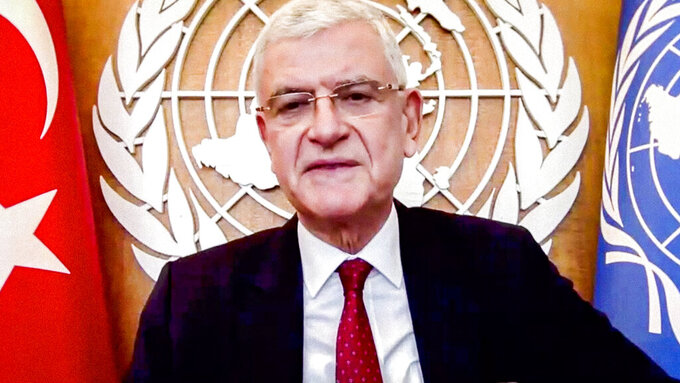 UNITED NATIONS (AP) — The United Nations voted Thursday to hold a summit on the COVID-19 pandemic on Dec. 3-4 to press for action on the global spread of the coronavirus and its “unprecedented” effects on societies, economies, jobs, global trade and travel.

The General Assembly voted 150-0, with the United States, Israel and Armenia abstaining, on a resolution authorizing the meeting and spelling out arrangements. It will include prerecorded speeches by world leaders and a discussion led by World Health Organization chief Tedros Adhanom Ghebreyesus.

Assembly President Volkan Bozkir called the high-level special session “a historic moment and a test for multilateralism” that “will be defined by our collective action on one of the most critical issues of our time.”

“If anything, it is a belated first step,” he said. “This is a time for action -- action in memory of the souls lost to COVID-19, action to protect the most vulnerable people who are depending upon us. And action to safeguard our futures. Let us not forget that none of us are safe until we are all safe."

U.N. Secretary-General Antonio Guterres said in an interview with The Associated Press in late October that it is “very frustrating" that leaders of the 20 major industrialized nations known as the G20 didn’t come together in March and establish a coordinated response to suppress the coronavirus in all countries. Instead, he said, they went their own ways as infections moved “every way, everywhere.”

The U.N. chief recalled that at the March meeting he urged adoption of a “wartime” plan including a stimulus package “in the trillions of dollars” for businesses, workers and households in developing countries trying to tackle the pandemic, and “a task force to have a combined effort to defeat the virus.”

The G20 is holding a virtual summit on Nov. 21-22 and Guterres said the United Nations will be “strongly advocating” for better coordination and seeking a “guarantee” that any coronavirus vaccine is treated as “a global public good” and be made “available and affordable for everyone, everywhere.”

U.N. spokesman Stephane Dujarric said the secretary-general “very much” hopes the U.N. summit soon after that will be an opportunity “for states to move forward together on facing the virus, both in the immediate-term and the longer term.”

The General Assembly resolution, whose negotiations were led by Azerbaijan and Canada, was put to a vote after three proposed amendments were defeated.

One by the United States would have eliminated a reference to the World Health Organization, which President Donald Trump withdrew from over the U.N. agency’s handling of the pandemic and his allegations that the WHO has been improperly influenced by China.

The resolution adopted Thursday recognizes the need for a global response to the pandemic "that is people-centered, gender-responsive, with full respect for human rights, multidimensional, coordinated, inclusive and innovative, based on unity, solidarity and multilateral cooperation.”

It notes “the fundamental role of the United Nations system in the comprehensive global response to the COVID-19 pandemic, including the crucial role played by the World Health Organization.”

The meeting is to include prerecorded speeches by heads of state and government of the 193 U.N. member nations, the observer states of Palestine and the Holy See, and “time permitting” a limited number of non-governmental organizations.

Diplomats said a proposal to have WHO chief Ghebreyesus speak at the opening was dropped during negotiations, but he will make a presentation and lead a dialogue during the summit’s second day. There will not be a final joint statement.

“The point of this special session is first of all to bring the membership together and to move forward collectively in fighting the pandemic,” General Assembly spokesman Brenden Varma said after the vote. “It’s also an opportunity to come and identify the gaps that exist right now in our response to the pandemic.”