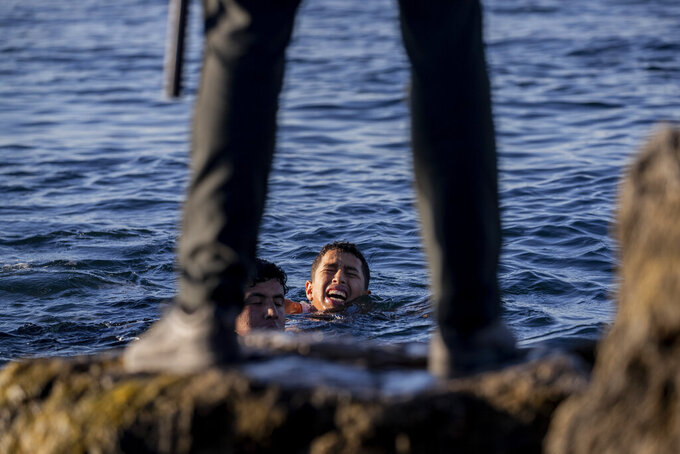 A Spanish civil guard wait for migrants to arrive at the Spanish enclave of Ceuta, near the border of Morocco and Spain, Wednesday, May 19, 2021. Spanish officials are acknowledging for the first time that the unprecedented migrant crisis has been triggered by an angry Rabat at Madrid's decision to provide medical treatment to the militant boss of the Polisario Front. (AP Photo/Bernat Armangue)

CEUTA, Spain (AP) — Thousands of migrants who have become pawns in a diplomatic spat between Morocco and Spain awoke to an uncertain future on Wednesday, after sleeping where they could find shelter following their massive border breach to reach the European country’s north African enclave of Ceuta.

Social services for the small city perched on an outcropping in the Mediterranean buckled under the strain after more than 8,000 people crossed into Spanish territory during the previous two days.

Exhausted by either scaling a double-wide border fence or risking their lives by swimming around a breakwater to reach a beach on the European side, many migrants spent the night in overcrowded warehouses under the gaze of Spanish police.

“We have never seen such an arrival of this magnitude,” Red Cross spokeswoman Isabel Brasero told the AP. “The city has the means to take care of all the people that arrive to its shores, but you never imagine that you will face this type of situation.”

Spain’s Interior Ministry said that it had returned more than half of the migrants. Those included some teenagers who appeared to be under 18 and whom Associated Press journalists saw Spanish police usher back across the border.

Paloma Favieres, spokeswoman for Spain's CEAR, a non-profit organization that receives government and private funding to care for asylum-seekers and refugees, said that “these forced returns are not legal.”

“It seems that among the 4,000 sent back (on Tuesday) there were underage children ... Children should be immediately put in custody of the city’s child welfare providers," she told the AP.

Spain’s Interior Ministry said authorities on the ground “are using all the established legal procedures legally corresponding to each case.”

While Morocco tightened its frontier controls, some people kept coming, forcing Spanish authorities to increase their criticism of counterparts in Rabat.

“This is an act of defiance,” Prime Minister Pedro Sánchez told Spain’s Parliament, a day after he visited Ceuta. “The lack of border control by Morocco is not a show of disrespect of Spain, but rather for the European Union.”

Over the decades, Spain has built a close relationship with Morocco to crack down on illegal border crossings, but also to increase economic ties and fight extremism.

But on Wednesday, Foreign Minister Arancha González Laya said for the first time in public that Spain believes Morocco loosened its border control to retaliate for Spain having given medical assistance to the head of the liberation movement for Western Sahara, a disputed territory to Morocco’s south.

“It tears our hearts out to see our neighbors sending children, even babies… (because) they reject a humanitarian gesture on our part,” González Laya told Spanish public radio.

Morocco’s loosened border watch came after Spain decided to grant entry for medical treatment to the chief of a militant group that fights Morocco for the independence of Western Sahara. Morocco annexed the sprawling region on the west coast of Africa in 1975.

Morocco’s Foreign Ministry had said Madrid’s move to assist Brahim Ghali, head of the Polisario Front, was “inconsistent with the spirit of partnership and good neighborliness” and vowed there would be “consequences.”

In the first public comments on the situation in Ceuta by a Moroccan official, Mostapha Ramid, minister for human rights, said in a Facebook post Tuesday night that Spain’s move to receive the Polisario leader was “reckless, irresponsible and totally unacceptable.”

“What was Spain expecting from Morocco when it hosted an official from a group that is carrying arms against the kingdom?” he asked.

Ramid told the AP on Wednesday that he posted the comments as a Moroccan citizen and senior official upset by Spain’s decision to host Ghali, but not on behalf of the Moroccan government.

But Moroccan lawmaker Youssef Gharbi, who serves on the parliamentary foreign affairs committee, told the AP on Wednesday that the decision to allow Ghali to receive medical treatment: “was the drop that made the cup spill over."

“We cannot cooperate in various fields such as security and trade and at the same time accept a stab in the back,” the lawmaker said. “In the past, Morocco stated clearly that it was against the independence of Catalonia. ... We expect Spain to behave in a positive way.”

It was unclear if Ghali, who is reportedly in a hospital in northern Spain recovering from COVID-19, will appear before a judge in Madrid on June 1 to testify on a 2019 lawsuit accusing him of tortures and an old genocide probe reopened this week at the request of an association of Saharawi campaigners against the Polisario Front.

European officials supported Spain with a harsh message for Morocco in a crisis that had echoes of the dispute the EU had with Turkey over the Syrian refuge crisis five years ago.

Many of those who decided to leave their homes have been left without work since the border was closed because of the pandemic, hurting the local economy that depends on the flow of goods, often carried by hand, from one side to the other.

The surge had become a trickle after Moroccan border guards enforced the frontier divided by the double-wide, 10-meter (32-feet) fence. Still, hundreds were still trying to find their way across the frontier. Spanish officers fired tear gas into the buffer zone between the countries to dissuade more crossings. Some people rowed small wooden boats to reach the beach where officers waited.

At least 5,600 Moroccans adults were returned to Morocco, in line with a decades-old agreement between the two countries to expel all those who swim across the border.

“We went to Ceuta twice and they sent us back. We are looking for solutions with all these young people have suffered too much” said 32-year-old Abdelmouniim El Ouali, who had been pushed back across the border after he traveled three days from Taounate — about 300 kilometers (185 miles) away.

“We want to return to Ceuta” he said, adding that while in the enclave the security forces shot rubber balls at those who crossed.

Hundreds spent Tuesday night in the streets, parks or on the hills bordering the city. Around 2,000 minors were sent to warehouses run by charity groups. AP journalists saw unaccompanied children sleeping on the floor of a warehouse, as well as in tent beds set up by the Red Cross.

Many shops were closed in Ceuta, a city with a population of 85,000 and an area of 20 square kilometers (7.7 square miles). City head Juan Jesús Vivas said that school attendance dropped by 60% on Tuesday with families concerned for what Vivas called “an invasion.”

Among the arrivals were sub-Saharan Africans, who often migrate to flee poverty or violence at home and saw the suddenly porous border as a chance to avoid an even more deadly sea journey to the Spanish mainland.

Aisha Diakaté, 25, fled conflict in Mali between 2018 after rebels killed her parents. She ended up in Morocco where she struggled to find work and had to beg to survive.

She walked from Tangiers and then swam across the border with her small child in arms. Now, after sleeping outside a warehouse, she was crushed to hear that she could be deported.

“I swam here with my child, why are they now asking me to go? That’s not right,” Diakaté said.

“We have nothing. If we return to Morocco, it is just suffering.”

A previous version of this story has been corrected to show that the spelling of the Moroccan official's last name is Ramid, not Hamid.