Under Trump, citizenship and visa agency focuses on fraud 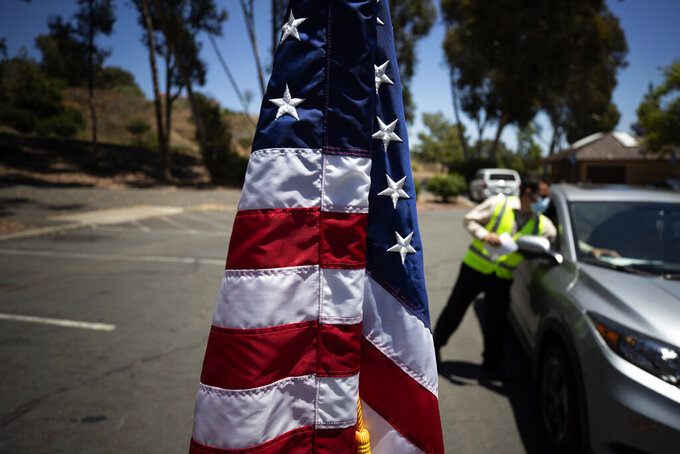 SAN DIEGO (AP) — The head of the agency handling citizenship and visa applications was surprised when he faced blowback for cutting a reference to the U.S. being a “nation of immigrants” in its mission statement. The son of a Peruvian immigrant added language about “protecting Americans” instead.

L. Francis Cissna argued that America is indisputably a nation of immigrants but that U.S. Citizenship and Immigration Services' mission statement wasn't the place to say so. Joseph Edlow, who now oversees the agency, said he hasn’t thought about the 2018 kerfuffle, but it crystallized for many how the Trump administration has changed the government's approach to legal immigration.

USCIS, established with the Department of Homeland Security in 2003, is emphasizing fraud detection, enforcement and vetting those seeking to work, live or become U.S. citizens. Applicants, attorneys and employees call it overkill, while immigration critics say it's overdue. New Trump administration rules range from making asylum protections more difficult to get to disqualifying more low-income applicants from green cards.

Processing times are longer, and the agency’s backlog of cases stands at 5 million. Making it tougher to get permission to live and work in America has had consequences for USCIS itself: its roughly $5 billion annual budget is funded almost entirely by application fees, which have dwindled with the stricter rules. Financial pressures mounted this summer as USCIS narrowly averted furloughs for 70% of its roughly 20,000 employees.

Curbing legal immigration has been a priority for President Donald Trump as he's reshaped the immigration system, arguably more than any predecessor. He’s thrilled supporters with an “America first” message and infuriated critics who call his signature domestic issue insular, xenophobic and even racist.

Before the election, The Associated Press is examining several Trump immigration policies, including r estrictions on international students, a retreat from America’s humanitarian role, a virtual shutdown of asylum and now curbing legal immigration.

Trump failed to get Congress to support cuts to the system of immigrants bringing over relatives, but Stephen Miller, a top Trump adviser, said moving to a more “merit based” system, based on skills, would be a priority if the president is reelected.

Democrat Joe Biden offers a sharp contrast: preserve family-based immigration and “streamline” naturalization for green-card holders. He wants a path to citizenship for about 11 million people in the U.S. illegally, which would require congressional support.

"This administration has undertaken a thorough revamping of the agency to restore its congressional mission of ensuring that benefits are only awarded to those who are genuinely eligible under law and that, ensuring in admitting them, no harm is done to our economic or national security interests,” he said.

"If you don’t do that, how can you really justify getting the millions of dollars and continuing your operation?” said Crocetti, who retired in 2011.

The changes are evident in USCIS offices. Workers who decide on citizenship and permanent residency applications in the San Diego office saw their workload grow about 20% when officials ordered all applicants for employment-based green cards be interviewed.

Edlow said the blanket interview requirement has been scrapped and whether such applicants are called in depends on the case.

The agency is bringing back Trump's rule that dramatically expands criteria for denying green cards to those receiving taxpayer-funded benefits. The U.S. Supreme Court decided in a 5-4 vote in January that the policy could take effect, but enforcement was briefly halted by a federal judge due to the coronavirus.

An analysis of all visa categories by the American Immigration Lawyers Association found long waits doubled to 10 months in the 2019 fiscal year from five years earlier.

Natividad Rodriguez, 85, has been waiting since July 2019 for a citizenship interview, the final step before the oath. The Chicago woman and Mexican native had hoped to vote this year.

“We have been waiting a long time,” said daughter Ana Maria Fuentes, who helped her mother apply. “It’s too much time.”

In their defense, administration officials note they approved more than 800,000 citizenship applications in fiscal 2019, the highest since 2008.

But the administration also is trying to reduce applications. For example, USCIS last year started requiring that no spaces on forms be left blank, even if a question doesn't apply, like a middle name. Agency officials say employees were taking too much time filling in incomplete applications.

Blank spaces have led to rejections, attorneys say. An American Immigration Lawyers Association survey this year found nearly 200 examples nationwide. Applications also were rejected for writing “none” or “not applicable” instead of “N/A,” which most instructions said to use.

The administration checks up on those who clear the hurdles. On a recent afternoon, all cubicles in the anti-fraud wing of the USCIS San Diego office were empty because its nine investigators were knocking on visa-holders' doors, including one who raised flags because the spouse was living in Georgia.

Nationwide, anti-fraud unit staffing has roughly doubled to about 2,000 under Trump, from less than 1,000. The unit projects 249,335 requests to investigate fraud in fiscal 2021, up from 119,424 in 2016. Edlow says checking if people are “actually married when they say they are” or are working at the job they listed is “an investment in the safety and security of this country."

Fiscal challenges came to a head in May when USCIS threatened furloughs to tackle a projected $1.2 billion shortfall. The agency didn't need the money, Edlow said, because application fees rebounded more than expected as offices reopened in June from coronavirus shutdowns and contracts were reviewed for cost savings.

A judge in September halted a 20% average increase in visa and citizenship fees, saying in part that two top Homeland Security officials were appointed illegally. Edlow, USCIS deputy director of policy, has been running operations since February.

While some agency employees support the focus on increased vetting, others say some changes are unnecessary and may discourage people from seeking legal status.

“Our job is to keep the doors open but safely secured. The way that it is being administered now, it doesn’t seem like the doors are open,” said Gary Thurman, an employee in Missouri speaking as vice president of the American Federation of Government Employees Local 3928 South.

Edlow said he's focused on better training and technology, including a transition to electronic files.

“Is it going to happen overnight? No, it's not," Edlow said. "I do want to get back to a point where we’re flush with money.”