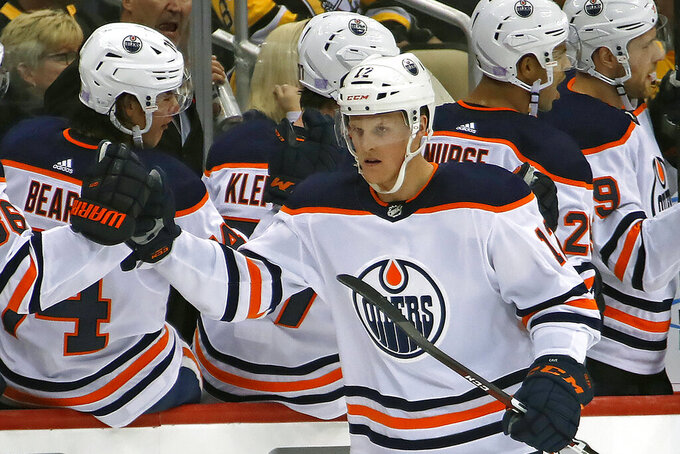 FILE - In this Nov. 2, 2019, file photo, Edmonton Oilers' Colby Cave (12) returns to the bench after scoring during the second period of an NHL hockey game against the Pittsburgh Penguins in Pittsburgh. The Edmonton Oilers say forward Colby Cave is out of emergency surgery after suffering a brain bleed. The team posted on Twitter that doctors removed a colloid cyst that was causing pressure on Cave’s brain Tuesday, April 7, 2020. He remains in a medically induced coma at Sunnybrook Hospital in Toronto. Cave’s wife, Emily, said earlier on Instagram that doctors were “fighting to keep him alive” in surgery. “We need a miracle,” Emily Cave wrote. (AP Photo/Gene J. Puskar, File)

The NHL club confirmed Cave’s death with a statement from his family:

“Our Colby was loved dearly by us, his family and friends, the entire hockey community, and many more. We thank everyone for their prayers during this difficult time."

NHL Commissioner Gary Bettman said Cave’s “life and hockey career, though too short, were inspiringly emblematic of the best of our game.”

“Undrafted but undaunted, Colby was relentless in the pursuit of his hockey dream,” he added.

Cave was was placed in a medically induced coma Tuesday at Sunnybrook Hospital in Toronto. He was airlifted to Toronto after being admitted to a hospital in Barrie, Ontario, on Monday.

Cave underwent emergency surgery Tuesday, a removal of a colloid cyst that was causing pressure on his brain.

On Wednesday, his wife, Emily, posted an emotional update.

“We need a miracle,” she wrote on Instagram. “Colby’s parents and myself, got to see him through a window and talk to him with a walkie talkie last night. We are no longer allowed to be in the hospital because Covid-19 rules. We have no idea when we will be allowed to see him again.

“The nurse has tied his wedding band to his ankle. I am dreaming of being able to touch you, hear your voice, squeeze your hand (3 times), and kiss you again. I love you so much, and my heart is shattered into a million pieces without my best friend.”

Cave scored once in 11 appearances with Edmonton this season. He had 11 goals and 23 points in 44 games with the American Hockey League’s Bakersfield Condors this season.

The Oilers posted Cave’s goal on Twitter this week. —an impressive rush down the right wing in which he beat a Pittsburgh defender and stuffed the puck past Penguins goalie Matt Murray.

“Colby is an awesome person who scored an awesome goal for us this season,” the team said.

Cav played five seasons with the Western Hockey League’s Swift Current Broncos, where he saw time as captain, before joining the Boston Bruins’ organization for the 2014-15 season after going undrafted. The Oilers claimed Cave off waivers on Jan. 15, 2019.

Cave had four goals and five assists over 67 NHL games with Boston and Edmonton.

The 6-foot-1, 200-pound Cave made his NHL debut with Boston on Dec. 21, 2017 after getting called up from Providence of the AHL. He played three games with Boston that season.

Cave played 15 more games with Boston in 2018 before the Oilers claimed him on waivers.

Cave was born in Battleford, Sasketchewan, and his death comes just more than two years after another hockey tragedy in the province. Sixteen people died when the Humboldt Broncos junior hockey team’s bus crashed on April 6, 2018.