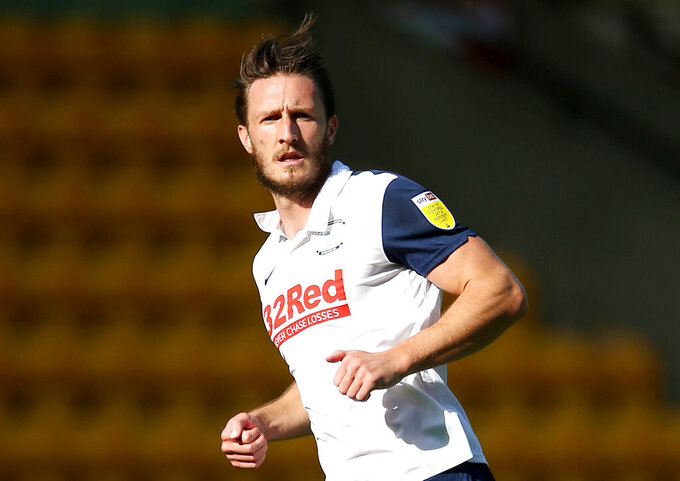 The first time Ben Davies went to Anfield was to sign for Liverpool on Monday.

Joining the champion of England is not something the 25-year-old defender expected while toiling away in the second division at Preston.

“Obviously it came as a bit of a surprise when it first came,” he said. “But once you start to get your head around it, the opportunity that is in front of me is incredible.”

The player gazing around the hallowed stadium soaking in the history wasn't even on Jürgen Klopp's radar until recent days.

“It’s probably clear that in a normal transfer window, without any issues, we would not look at Preston if there’s a player for us," the Liverpool manager said. "It’s not really likely.”

The pandemic has shaken football. Even one of the world's most valuable teams such as Liverpool is not immune to the impact of empty stadiums draining the business of cash.

The January transfer window has seen spending drop to only around a third of the 230 million pounds (then $300 million) forked out a year ago by Premier League clubs — the lowest winter outlay since 60 million pounds in 2011.

Liverpool had tried to avoid spending anything. Even after losing Virgil van Dijk in October and Joe Gomez in November to long-term knee injuries, Klopp had been unwilling — or unable — to sign cover in the January transfer window.

Then reality set in with the prospect of the Premier League trophy being surrendered along with the other senior center back — Joel Matip — being ruled out for the rest of the season on Monday with an ankle ligament injury.

So a combination of panic and necessity on transfer deadline day saw Davies remarkably swap life in mid-table in the Championship to be part of a Premier League title defense, and Ozan Kabak join on loan from Schalke, the Bundesliga's worst defense.

Whereas Liverpool bought Van Dijk three years ago in a fee that could rise to reach 75 million pounds, Davies will cost only around 1 million pounds.

“Since our situation got clearer and clearer, the problems we had,” Klopp said, “when we saw him we got really excited about it and thought, ‘Wow.’”

Much like the amazement on deadline day a year ago when Manchester United signed striker Odion Ighalo from Shanghai Greenland Shenhua in the final hours of the window. The Nigerian was only available as attacking cover because the coronavirus outbreak forced the suspension of the Chinese Super League.

The pandemic has forced most clubs to look within because of persisting financial uncertainties.

“We’re up against something extraordinary,” Inter Milan chief executive Giuseppe Marotta said on Monday. “We’re operating conservatively and trying to take advantage of our own assets.”

Rather than signing players for vast fees, Inter focused on tying down young talent to longer contracts.

The speculation about Chinese owner Suning considering selling Inter could be fueling the parsimony. Marotta, though, is pointing to this being a transformative moment for world football.

“The pandemic has made a big impact and the old model is not sustainable now," Marotta said. "We’re not going to see deals with huge transfer fees and salaries anymore.”

In France, the collapse of a broadcasting deal with Spain-based group Mediapro created the financial squeeze worsened by the pandemic in restricting deals by Ligue 1 clubs in the transfer window. Even France’s richest club, Paris Saint-Germain, did not buy or sell players.

It was a similar situation at Barcelona. Ronald Koeman has been prevented from signing reinforcements due to Barcelona's heavy debt, despite being 10 points behind Spanish league leader Atletico Madrid, which brought in Moussa Dembélé from Lyon to replace Diego Costa.

“Barcelona is one of the many big clubs that because of the COVID-19 pandemic and the lack of spectators in the stadiums is struggling the most," the Barcelona coach said. "Also, the fact of lack of tourism in Barcelona is affecting the economic impact of the club. In general, all big clubs have very bad numbers, not just here.”

In Germany, the most expensive transfer was an in-house deal with Leipzig signing winger Dominik Szoboszlai from fellow Red Bull-funded club Salzburg for a reported 25 million euros. Bayern Munich spent nothing on reinforcements in its quest to retain Champions League and Bundesliga titles.