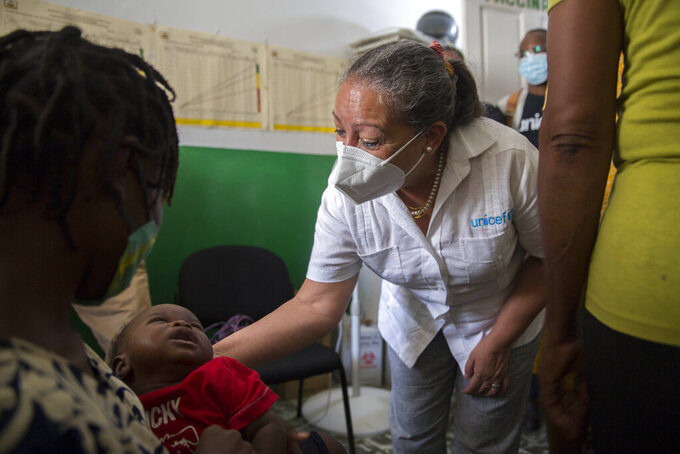 Jean Gough, UNICEF regional director for Latin America and the Caribbean, greets an infant in a malnutrition clinic in Les Cayes, Haiti, Wednesday, May 26, 2021. Gough visited the southern seaport amid concerns over an increase in malnutrition and a drop in childhood immunizations that officials blame on the coronavirus pandemic. (AP Photo/Joseph Odelyn) 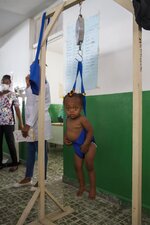 LES CAYES, Haiti (AP) — Severe acute childhood malnutrition is expected to more than double this year in Haiti as the country struggles with the coronavirus pandemic, a spike in violence and dwindling resources, a UNICEF report said Monday.

More than 86,000 children under age 5 could be affected, compared with 41,000 reported last year, said Jean Gough, UNICEF's regional director for Latin America and the Caribbean.

“I was saddened to see so many children suffering from malnutrition,” she said after a weeklong visit to Haiti. “Some will not recover unless they receive treatment on time.”

In a slightly less dangerous category, acute malnutrition in kids younger than 5 in Haiti has risen 61%, with some 217,000 children expected to suffer from it this year, compared with 134,000 last year.

Gough told The Associated Press during a recent visit to a hospital in the southern city of Les Cayes that UNICEF has only a one-month supply left of a special food paste given to children in need and is seeking $3 million by the end of June.

Officials said the pandemic also has disrupted health services, with childhood immunization rates dropping from 28% to 44%, depending on the vaccine. The decrease has led to a rise in diphtheria cases as health workers brace for an expected measles outbreak this year.

UNICEF noted that unvaccinated children also are more likely to die from malnutrition.

Lamir Samedi, a nurse who works at a community health center in the southern town of Saint-Jean-du-Sud, said the target was to vaccinate 80% of children in the area, but they had yet to reach 50%.

Among the children hospitalized is 11-month-old Denise Joseph, who lay quietly in a crib in Les Cayes after being diagnosed with tuberculosis two weeks ago.

“She never eats,” said her grandmother, Marie-Rose Emile, who is caring for the infant since her mother also is ill. Emile is struggling to provide for the baby, saying she has barely harvested any beans, corn or potatoes this year.

Gough, the UNICEF official, said she was discouraged by the dismal numbers of malnutrition and drop in childhood immunizations. She said more outreach services are needed because not enough people are visiting community health centers.

Among those visiting a health center for the first time was 27-year-old Franceline Mileon, who brought her young child after hearing a health official with a bullhorn in her neighborhood announcing that a vaccination program had begun. She sat on a bench, coddling her baby, as she waited for a nurse to weigh her.

Overall, UNICEF said it needs nearly $49 million this year to meet humanitarian needs in Haiti, adding that little of that amount has been pledged. The agency $5.2 million of that amount would go toward nutrition and $4.9 million for health, including childhood immunizations.