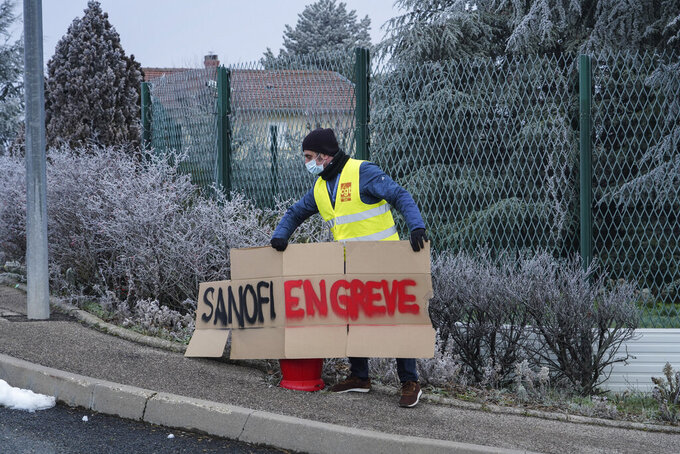 A worker install a poster reading "Sanofi on strike" outside the French pharmaceutical company Sanofi headquarters in Marcy l'Etoile, central France, Tuesday, Jan.19, 2021. Employees of pharmaceutical company Sanofi stage a protest against planned redundancies that they say could slow the fight against the Coronavirus pandemic . Sanofi had been developing Covid vaccines but will not be ready to roll out until late 2021. (AP Photo/Laurent Cipriani)

MARCY L'ETOILE, France (AP) — Unions at French drug maker Sanofi held a one-day strike Tuesday at the lab where it is developing a COVID-19 vaccine and some other sites, to protest job cuts the company plans despite a boost in investment amid the pandemic.

Some 200 workers with union flags and megaphones gathered outside the entrance to the sprawling Sanofi research and development facility in Marcy l’Etoile in central France. They said that hundreds of planned job cuts in France could slow the fight against the coronavirus pandemic.

The company announced last year it plans 1,000 job cuts across France over three years “to reinforce the effectiveness of our organization and adapt to the evolution of jobs and stakes of tomorrow.” It said in a statement Tuesday that it would rely on voluntary departures, but wouldn't comment further because of confidentiality rules amid ongoing negotiations with unions.

Union members at Sanofi also plan to join broader demonstrations Saturday in France against job cuts during the pandemic.

Sanofi, France's biggest pharmaceutical company and a world leader in vaccine development, has also come under criticism for its slow COVID-19 vaccine rollout. Sanofi and British partner GlaxoSmithKline said last month that their potential vaccine won’t be ready until late 2021 because they need to improve the shot’s effectiveness in older people.