Unlike 2008 crisis, pandemic has no leader, no global plan 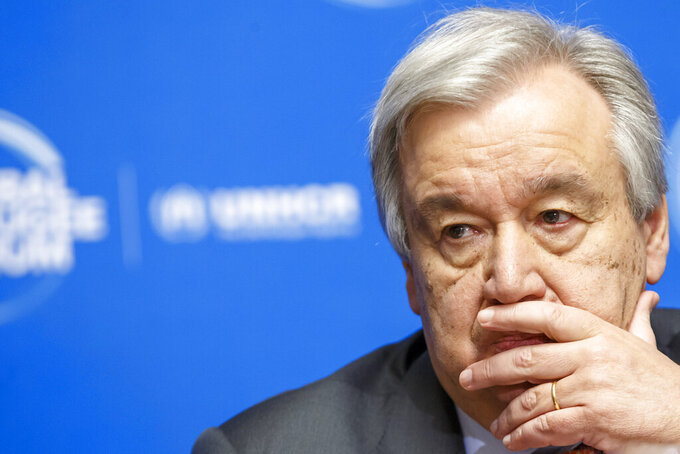 FILE - In this Dec. 17, 2019 file photo, U.N. Secretary-General Antonio Guterres attends the UNHCR - Global Refugee Forum at the European headquarters of the United Nations in Geneva, Switzerland. When financial markets collapsed and the world faced its last great crisis in 2008, major powers worked together to restore the global economy, but the COVID-19 pandemic has been striking for the opposite response. The financial crisis gave birth to the leaders’ summit of the Group of 20, the world’s richest countries responsible for 80% of the global economy. But when Guterres proposed ahead of their summit in late March that G-20 leaders adopt a “wartime” plan and cooperate on the global response to suppress the virus, there was no response (Salvatore Di Nolfi/Keystone via AP, File)

UNITED NATIONS (AP) — When financial markets collapsed and the world faced its last great crisis in 2008, major powers worked together to restore the global economy, but the COVID-19 pandemic has been striking for the opposite response: no leader, no united action to stop the spread of the new coronavirus, which has killed over 200,000 people.

The financial crisis gave birth to the leaders’ summit of the Group of 20, the world’s richest countries responsible for 80% of the global economy. But when U.N. Secretary-General Antonio Guterres proposed ahead of their summit in late March that G-20 leaders adopt a “wartime” plan and cooperate on the global response to suppress the virus, there was no response.

In an April 6 letter to the G-20 following the summit, former U.N. Secretary-General Ban Ki-moon and 164 other current and former presidents, prime ministers, scientists and global figures urged the group's leaders to coordinate action “within the next few days” and agree on measures to address the deepening global health and economic crises from COVID-19. Again, no response.

A clearly frustrated Guterres told reporters Thursday that instead of “solid leadership" to fight the pandemic, each country went ahead with a different strategy, increasing the risk that the virus would not disappear, but rather spread and then return.

“It is obvious that there is a lack of leadership," he said. “It is obvious the international community is divided in a moment where it would be more important than ever to be united.”

Guterres said what is key is leadership combined with power.

“We see remarkable examples of leadership, but they are usually not associated with power,” he said. “And where we see power, we sometimes do not see the necessary leadership. I hope this will be overcome sooner rather than later.”

But the 21st century has seen increasing fractures in global unity and cooperation.

In his state of the world speech last September, Guterres warned of the risk of the world dividing between the United States and China at a time of rising populism, increasing xenophobia, spreading terrorism, “exploding” inequality and a lingering climate crisis. He said there is a severe erosion in multilateralism — the foundation on which the United Nations was founded 75 years ago after the devastation of World War II.

The COVID-19 pandemic has put that warning into sharp focus, both in the world’s inability to come together in tackling the coronavirus and in the difference in health care, treatment and testing in G-20 nations compared with what exists in developing countries.

The failure has been playing out in the U.N. Security Council, the U.N.’s most powerful body, which has been impotent in addressing the pandemic — a crisis that Germany’s U.N. ambassador, Christoph Heusgen, calls “the biggest challenge that civilization has faced since the Second World War.”

The council has been unable to adopt a resolution that would endorse the secretary-general’s call for pandemic cease-fires in conflicts including Syria, Yemen, Libya and Afghanistan because of a dispute between the United States and China over including a reference to the World Health Organization.

After weeks of praising Chinese President Xi Jinping for his handling of the initial outbreak of the coronavirus, U.S. President Donald Trump is now accusing China of not acting quickly to inform the world of what was happening. He has also suspended U.S. funding to the WHO, accusing the U.N. health agency of parroting Beijing.

Security Council diplomats say China is insisting on a reference to the WHO in any resolution while the U.S. wants no mention of the agency and instead wants the text to demand “transparency” about COVID-19.

When the council discussed the pandemic on April 9, Germany’s Heusgen criticized its “deafening silence” and reminded members that during the 2008 financial crisis the G-20 displayed “both the leadership and the power" to deal with it.

Estonian Ambassador Sven Jürgenson, the council president for May, told reporters Friday, “I think it’s a shame that we have not been able to take the leadership.”

Since mid-March, Guterres has been speaking out, warning of the global threat posed by the pandemic, especially in the developing world. .He launched a $2 billion appeal to help vulnerable and conflict-torn countries on March 25 which has received about $1 billion.

David Beasley, head of the U.N. World Food Program, has warned of “a hunger pandemic” that could push 265 million people “to the brink of starvation by the end of 2020.”

U.N. humanitarian chief Mark Lowcock said most experts agree the pandemic may not peak in the poorest parts of the world for three to six months. He said $90 billion could provide income support, food and a health response for 700 million of the world’s poorest and most vulnerable people in 30 to 40 countries — a price tag just 1% of the $8 trillion stimulus package that the G-20 countries put in place for helping the global economy.

Robert Malley, president and CEO of the International Crisis Group think tank, said at a recent briefing, “It’s clear that we’re facing a crisis of international leadership” and it’s unclear who can take over — the G-20 now led by Saudi Arabia, the Group of Seven major industrialized countries led by the United States, the United Nations or anyone else. That's because the powers are all looking inward, and are less interested in being generous when their own citizens are facing crises, he said.

Malley said there shouldn’t be nostalgia for the past ”when there was virtually a unilateral or Western or U.S. domination” of global power which many countries resented.