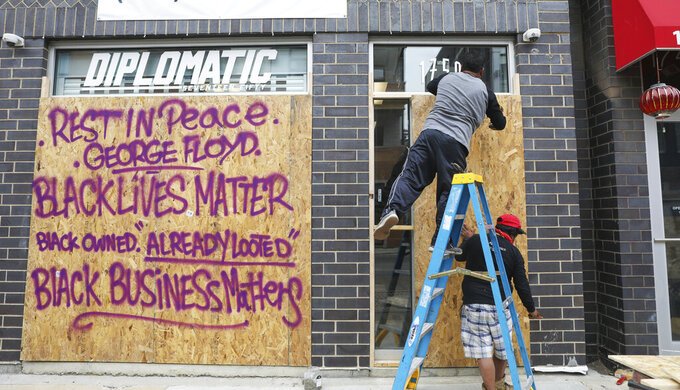 Diplomatic 1750, a sneaker and streetwear consignment boutique owned by Brian Heath, is boarded up in Chicago on June 1, 2020. Heath, who is black, said he's upset that his sneaker and streetwear consignment boutique in Chicago's Wicker Park neighborhood was vandalized on Sunday. But he's even more upset about Floyd's death, which triggered the unrest. (AP Photo/Teresa Crawford)

CHICAGO (AP) — Vandals robbed malls and shopping centers in communities outside Chicago. They stormed stores across the San Francisco Bay in what appeared to be coordinated smash-and-grabs. Banks and a sleek, modern office building were burned to the ground in a San Diego suburb.

As officials locked down city centers due to protests and violent unrest over police brutality, trouble has emerged in some neighborhoods and suburbs, leaving communities that felt insulated from the early unrest suddenly vulnerable and fearful.

Many city and suburban officials blamed most of the mayhem on opportunists rather than those protesting the killing of George Floyd, a handcuffed black man who pleaded for air as a white Minneapolis police officer pressed a knee against his neck.

More than 100 people converged on an outdoor mall in Walnut Creek, a wealthy San Francisco suburb, carrying away garbage bags stuffed with merchandise. Video from news organizations and bystanders showed women hauling pricey purses out of stores. One woman was shot in the arm by someone in a vehicle that sped from the scene, police said.

“We all understand the rage and the feelings that many have over what’s happening in Minnesota. What we’re concerned is that these people that are here have nothing to do with that; they are just here to make mayhem,” Mayor Loella Haskew told KRON-TV.

Walnut Creek was trending on Twitter Saturday with many posters threatening to stir up trouble in the wealthy and mostly white suburb.

But the problems affected racially and economically diverse neighborhoods too.

In West Philadelphia, a predominantly black neighborhood far from the city center, police on Saturday fired tear gas, people were seen running from at least one store with goods and police cars were ablaze or otherwise damaged. In Northeast Philadelphia, people ran into stores and emerged with merchandise.

Even so, pop-up peaceful protests were scattered all over the Philadelphia suburbs — ranging from several hundred in public parks to a few people holding signs in supermarket parking lots.

Many Chicago suburbs imposed curfews and closures, including in the largely black suburb of Calumet City south of Chicago, where vandals ransacked a mall, and in the largely middle-class and white western suburb of North Riverside where one person was shot.

In Aurora, about 40 miles (65 kilometers) outside Chicago, “widespread incidents of violence, vandalism and stealing” prompted Mayor Richard Irvin to declare a state of emergency Sunday in Illinois’ second-largest city that is roughly 40% Latino.

Alderman Raymond Lopez, whose South Side ward was heavily damaged, said Lightfoot’s focus on downtown essentially “left neighborhoods to basically fend for themselves.”

Lightfoot said Monday that vandalism and violence “spread like a wildfire” and more officers and other resources were deployed to neighborhoods.

“We didn’t stand by and let the South and West sides burn,” Lightfoot said. “There is no way, no way, that we would ever let any neighborhood receive more resources and protection than any others, ever.”

In the nation’s capital, protesters were allowed to roam unchecked through several blocks for at least two hours after being chased away from a park near the White House by officers with tear gas, plastic pellets and batons. Despite the pleas of some protesters, others began breaking windows and setting fires.

Metropolitan Police Department Chief Peter Newsham said Monday that police had to balance the use of force with a desire to prevent the situation from spiraling.

“One of the tactics that we are seeing is when we do take police action in the large crowds, that it agitates the crowds and it becomes very volatile and very dangerous for our officers,” he said.

In the San Diego suburb of La Mesa, banks and an office building were burned and windows smashed at businesses in the quaint, gentrifying downtown, including a jewelry shop, a Goodwill store, a Sotheby’s real estate office and a popular bar. Television video showed people running into stores and stealing items.

The town of about 60,000 was roiled last week by the arrest of a black man suspected of assaulting a police officer.

For business owners, the situation was especially disheartening because many had just reopened after being shuttered under orders to stem the coronavirus.

In Emeryville, California, across the bay from San Francisco, Keyla Calderon swept up glass at her recently reopened medical scrubs store on Sunday, a day after thieves stormed local malls.

“To hear the alarm ring and see people destroy the store before my eyes, it was heartbreaking," Calderon said.

Chicago business owner Brian Heath, who is black, said he's upset that his sneaker and streetwear consignment boutique in Chicago’s Wicker Park neighborhood was vandalized on Sunday. But he’s even more upset about Floyd's death, which triggered the unrest.

"(I) don’t think the looting is necessary, but I definitely feel like something needs to be done, you know, to kind of protect everybody,” said Heath.