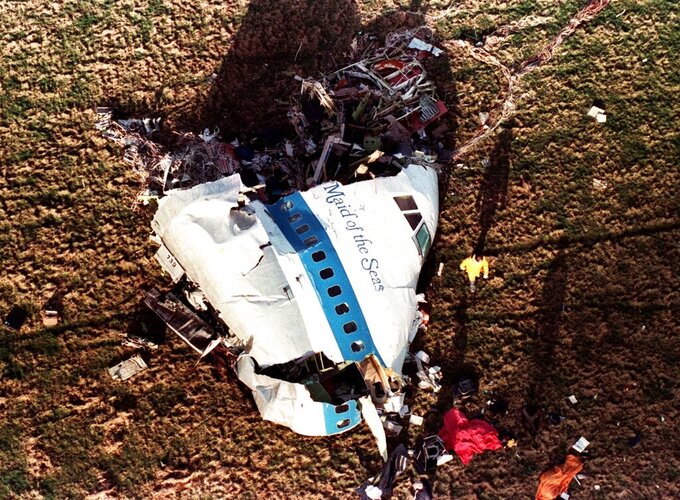 FILE - In this Dec. 22, 1988 file photo the nose section of Pan Am Flight 103, a 747 airliner dubbed "The Maid of the Sea," lies in a field outside the village of Lockerbie, Scotland. The United Kingdom has suffered its worst ever civilian loss of life since World War II, because of the coronavirus, with some 100,000 taken by the pandemic, a fearsome foe whose defeat is still some time away. (AP Photo/Martin Cleaver, File)

LONDON (AP) — There are no warning sirens, nor a rush for shelter. No neighborhoods of collapsed rubble with bodies buried inside from Nazi Germany bombardment. It is quieter than all that.

But the United Kingdom has now suffered its worst civilian loss of life since World War II by a significant number. Some 70,000 non-combatants perished in the 1940s. Three quarters of a century later, it's 100,000 taken by the coronavirus pandemic, an adversary no less relentless and fearsome and one whose defeat is still some time away.

One hundred thousand dead. For perspective: That's just over 3,000 more than witnessed England's only World Cup triumph in 1966 at Wembley Stadium as “Sunny Afternoon” by The Kinks topped the pop charts. And it's 30,000 more than the crowd that gathered two decades later at the same famous venue for the Live Aid concert.

Here's a look at some of Britain's struggles with civilian deaths during World War II and since.

In World War II, the threat to Britain was existential. During the German Blitz of 1940-1941, bombs rained on London and other strategic cities. The defiance, endurance and stoicism of the population during those months became known as the “Blitz spirit.”

It has been called upon during a series of crises over the years by British governments and politicians of various stripes. The current crop, led by Winston Churchill aficionado Prime Minister Boris Johnson, has invoked it as a mindset to combat the coronavirus crisis.

But the folklore of that spirit was built on a healthy dose of propaganda to keep Britons afloat in their darkest hours. There was no 24/7 rolling cable TV news detailing death, infection and deception, nor was there social media peddling conspiracy theories that the virus is all a hoax. There was, however, disproportionate suffering then, as there is now, of those less fortunate in life to begin with.

The endurance has endured; what other choice is there? But the only defiance shown by anyone but front-line workers in 2021 appears to be mainly by those flouting lockdown guidelines, which they see as an infringement on their personal liberties — thus putting others' health at risk.

From September 1940-May 1941, the U.K. suffered an intensive bombing campaign by Germany's Luftwaffe that struck the biggest cities in England, Scotland, Wales and Northern Ireland. More than 40,000 were killed, half of those in London alone.

"Far be it from me to paint a rosy picture of the future. Indeed, I do not think we should be justified in using any but the most somber tones and colors while our people ... are passing through a dark and deadly valley,'' wartime leader Churchill said at the time.

Such imagery could resonate just as much on the British Isles now as it battles a virulent surge of coronavirus mutation, putting the hallowed National Health Service under its most severe pressure since its inception in 1948.

In the last phase of the war from 1944-1945, the Nazi rocket campaign, primarily the V2, was deployed to chilling effect, with east and south London taking the brunt of the bombings and deaths as they had during the Blitz. Thousands of civilians in residential communities died from those V2 rocket attacks.

ATTACKS ON BRITISH CITIES AND CIVILIANS

There have been other times of recent British national trauma, notably from the 1970s to just before the pre-pandemic epoch. These were mainly based on attacks on civilians in major urban centers.

There was the Irish Republican Army's mainland campaign in response to the British Army's military operations in Northern Ireland. That targeted people in pubs, parks and shopping areas as well government buildings and representatives. Deaths were in the dozens.

The bombing of Pan Am 103 over the Scottish town of Lockerbie days before Christmas in 1988, blamed on Libyan agents, claimed more than 40 British lives in the air and on the ground, as well as 190 Americans and victims from many other nations.

Islamic State group-inspired attacks in more recent years claimed dozens of lives in several London locations as well as at an Ariana Grande concert in Manchester in 2017. IS was vanquished in Iraq and Syria, and a spate of attacks abated in the U.K. Brexit, divisive and angry though mainly bloodless, then engulfed and divided the nation.

Then came the pandemic.

Tamer Fakahany is AP’s deputy director for global news coordination and has helped direct international coverage for the AP for 18 years. Follow him on Twitter at https://twitter.com/tamerfakahany