Upstart Lyon fuels debate on how to reform Champions League 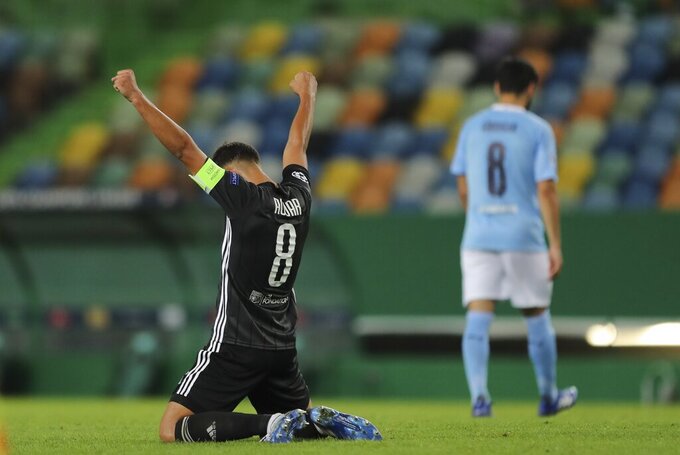 Lyon's Houssem Aouar reacts at the end of the Champions League quarterfinal soccer match between Lyon and Manchester City at the Jose Alvalade stadium in Lisbon, Portugal, Saturday, Aug. 15, 2020. Lyon won the match 3-1. (Miguel A. Lopes/Pool via AP)

Lyon has beaten Manchester City and Juventus, one year after Ajax sent Juventus and Real Madrid home early, to make the Champions League seem more vibrant and less of a closed shop than some elite clubs want.

Now Lyon faces the same test Ajax failed -- to become the longest-shot European champion in a generation to guarantee a return to next season's competition.

Their exploits will feed into a revived debate about how to reform UEFA club competitions ahead of the 2024-25 season.

UEFA said Monday talks “will soon restart with all stakeholders, and no decisions have been taken.”

Before the debate stalled last year -- when domestic leagues and mid-sized clubs opposed plans favoring a wealthy elite -- one idea aired was to reward Champions League semifinalists starting in 2025 with a place in the next group stage.

After a seventh-place finish in the French league, which ended early because of the pandemic, Lyon will miss out on European soccer completely if it doesn't win the Champions League — which earns an automatic spot in next season's group stage.

Standing in Lyon’s way is Bayern Munich, which is heavily favored in their semifinal on Wednesday. Leipzig or Paris Saint-Germain awaits in Sunday’s final in Lisbon. A Lyon-Leipzig final would be the most unheralded since Porto beat Monaco in 2004.

Ajax’s last-minute loss to Tottenham in the 2019 semifinals won sympathy because it sent the Dutch champion -- a four-time European Cup winner playing in a mid-ranked domestic league -- back to the Champions League qualifying rounds.

“Everybody was excited about Ajax,” UEFA president Alexsander Ceferin said in May 2019 after telling member federations of club-approved proposals to shake-up the Champions League. “It’s a romantic feeling, (Ajax) showed that everything is possible.”

Lyon has repeated the feat by over-achieving with young players at a well-run club trying to keep pace in soccer's booming era of globalization.

Being in the Champions League is key to business plans of storied clubs and their emerging rivals. Clubs can top 100 million euros ($120 million) in prize money from UEFA each season along with the added revenue that comes from global exposure.

Some in the influential European Club Association wanted to minimize their risk by suggesting last year that 24 of 32 group-stage places should roll over year-on-year based on the previous Champions League. They also hoped entry in 2024 would reflect results over several years rather than simply reward high placings in the 2023-24 season.

The ECA’s leader, Juventus president Andrea Agnelli, surprised many in March by questioning if Atalanta deserved to make its Champions League debut based on one good Serie A season ahead of European regular Roma. Atalanta missed the semifinals only when PSG scored two late goals last Wednesday.

The ECA, which declined to comment Monday before the talks resume, has stressed clubs need stability in financial planning.

Any “closed shop” ideas would weaken historic ties to national leagues. Clubs have qualified for UEFA’s competitions since 1955 on merit directly through domestic success.

Domestic leagues see their own decline in a closed-off Champions League with the inevitable loss of sporting relevance and marketing value.

For the 29-nation European Leagues group, the only acceptable exemptions from domestic qualifying paths are entries to reward UEFA competition winners.

The UEFA talks will resume in a very different context after the COVID-19 pandemic has upended the global economy.

Decisions by UEFA’s executive committee could be made next year, before it can start selling broadcast rights worth billions of dollars.

For Ajax, though, the current format means the Dutch club doesn't want to this year's upstart go all the way.

French champion PSG plus Bayern and Leipzig, first and third in the Bundesliga, have already qualified for the next group stage.

If any of that trio wins the Champions League on Sunday, the vacant group-stage place is gifted to the Dutch league winner.

But if Lyon wins, Ajax is once again pushed into the qualifying rounds.