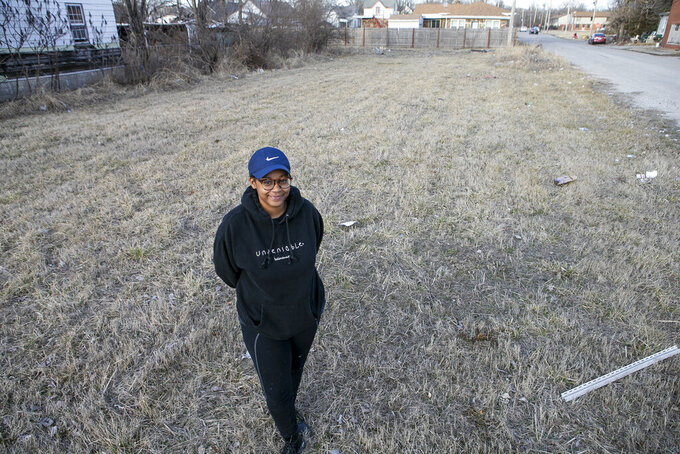 Eugenia Alexander is planning to build a creative green safe space for the community serving the city of East Saint Louis at the intersection of Trendley Ave. and 11th St. (Derik Holtmann/Belleville News-Democrat via AP)

EAST ST. LOUIS, Ill. (AP) — During the beginning of the pandemic, as many people were trying to grasp what exactly COVID-19 was, Eugenia Alexander decided she’d start growing produce for her family and the community at her Glen Carbon home. She thought she needed it for survival.

“I wanted to do that because what was happening was a lot of fruit was being recalled,(and) a lot of veggies were being recalled during the pandemic when it first started, so I was just like, you know what, us getting food from these grocery stores isn’t like promised,” Alexander said. . “Anything can happen. If it wasn’t a pandemic, to where it could be shut down and what are we gonna do?”

That was the start of Alexander’s fight for food justice, a grassroots cause aimed at eliminating barriers to accessing healthy foods. Now, nearly a year later, she’s making final preparations for what will become an urban farm compound in East St. Louis, a food desert, where the community can receive fresh produce and learn more about gardening. She plans to start it in the summer.

But she wouldn’t have been able to make preparations for the farm compound without the small network of Black women urban farmers in the St. Louis and metro-east region who are dedicated to bringing fresh produce to underserved communities.

That camaraderie is especially needed now, as Black communities are still experiencing the disproportionate consequences of the COVID-19 pandemic and police brutality that defined the past year.

Urban farming is simply the practice of growing or producing food in an urban area. It is especially vital in underserved communities that lack access to fresh food.

In north St. Louis, an underserved community, Tosha Phonix has made supporting the work of urban farmers her life’s work. Known for her food justice activism, Phonix advocates for Black urban farmers to ensure they’re not lacking resources.

Last year, she held a tool bank at her farm in Spanish Lake where farmers could rent and donate tools. She also founded EVOLVE (Elevating Voices of Leaders Vowing for Equity), a community-based group that’s aimed at building equitable food systems in St. Louis.

Nearly 30 census tracts in St. Louis and St. Louis County qualify as food deserts, according to the most recent data from the United States Department of Agriculture. Almost all of them are in the area’s north side. Spanish Lake, where Phonix farms three acres, is one of them.

St. Louis’ northern region is home to most of the city’s Black population. Among the issues in the area are homes decreasing in value and residents experiencing striking health disparities compared to white residents in the city’s south side. Phonix knows those problems are systemic. It’s what encourages her to continue being a conduit through which Black urban farmers can gain more support and resources.

For Phonix, that work starts with the community.

“I would be out growing food, and neighbors would come out, and it would be older neighbors and they were shocked to see me out because I’m young,” Phonix said about the community reception when she first started farming. “And we would start to have these conversations and build a relationship, and when I would leave and come back, they’d tell me they’d watch my stuff for me. That’s community. It was building community.”

Phonix’s farming journey started seven years ago as she became curious about eating healthier. Having a dietary restriction because of her Muslim faith was also a factor. Along with having her family’s farm in Spanish Lake, she has land in Walnut Park that will be used for the community to have fresh produce. Phonix grows mainly vegetables, but she also grows fruits like watermelon, cantaloupe and strawberries. She plans to grow fruit trees soon.

Phoenix said the more she started doing the work, the more she realized how easy it is for Black women urban farmers to be overlooked.

“Being a Black woman in fighting (for food justice) and not allowing anybody to limit me, I started to see the problems of my ancestors, and the deliberate effort to erase me from the work,” Phoenix said.

That’s why Phonix ensures Black women are included in conversations about urban farming and the need for more Black farmers to acquire land. After all, she understands the historical tie between Black people and land in this country.

She added: “Black women haven’t been afforded the right to be stay-at-home moms. We haven’t been afforded the right to not work and be on our hands and knees. My aunt worked for white families scrubbing floors, cleaning houses. That, mentally, is taxing on us. Black women have been working in agriculture. We’ve been sharecropping. We’ve been drawing water.”

Last year, Phoenix launched a grant program for BIPOC (Black, Indigenous and people of color) farmers. She secured money from outside organizations and her personal funds to give multiple urban farmers $400 grants.

“It’s not a lot, but it’s enough to get them started, especially since there isn’t much out there for Black and Indigenous People of Color growers, and I narrowed it down to North St. Louis County and the metro-east - the areas that need the help,” Phoenix said. “And when I say metro-east, I mean East St. Louis, Brooklyn and places like that that need the help that don’t get the resources.”

Kamina Loveless, an East St. Louis native, was one of the grant recipients. She used the funds for buying more gardening tools. For 12 years, Loveless has used her backyard garden as a source from which East St. Louis residents can learn about living sustainably and take produce when it’s available.

Currently, she consults people on having indoor gardens, and, earlier this month, she donated gardening kits for people in the community.

Providing produce and other resources for the community was instilled in Loveless at an early age. Her father moved to Illinois from Mississippi during The Great Migration and started a farm in Brooklyn, Illinois, the country’s oldest Black town. Loveless grew up on that farm and applied what she learned from her dad to her own garden after she saw a need for fresh food resources in East St. Louis.

Nearly 40% of residents in East St. Louis live below the federal poverty line. Along with the city being a food desert, it also lacks a hospital. The systemic conditions in the town are what strengthens Loveless to continue providing for the community.

But there’s one thing that Loveless wishes she had more of:

“Land,” she said. “It sounds so cliché, the land, because right now I know this is prime real estate here in East St. Louis, and I was so afraid of being left out.”

“I feel like if I don’t continue to have the network and have the voice, that I will be cut out.”

Nevertheless, she’s grateful for the support she’s received from other Black women. It motivates her.

“Now that I understand why I’m doing it, it just feels so doggone liberating and so damn good,” Loveless said about being a Black woman in urban farming. “I’m just proud of it, no matter what the outcome may be. It’s the fact of the matter of the fight and that we never give up on whatever it is that we’re working on. It just feels so good.”

On 10th Street and Trendley Avenue in East St. Louis is the half an acre of land that will be Alexander’s future farm compound. Abandoned homes and trash inundate the block. But Alexander hopes that The Indigo Garden, the name of the compound, will rejuvenate the street and continue her family’s farming history.

The plot of land was the home of Alexander’s great-grandmother.

Along with growing fresh fruits and vegetables, the farm compound will also be a source of various indigo dyes.

“I started painting like 16 years ago, and I got into indigo dying and I wanted to find a more sustainable and more natural resource or just a more natural way of getting my dyes and stuff like that,” Alexander said about her interest in growing indigo dyes

Her goal with the Indigo Garden is for people in East St. Louis to learn more about indigo dying, in addition to providing art education classes to children in the area.

“I just wanted to bring those, like resources, in farming back to East St. Louis because there’s so much land there that has so much potential to act as a source of food and a source of income for the city.”

Alexander is currently working to clean the land to make sure it’s ready for community use in the summer. In April, she’ll host a tree planting event at the future garden where volunteers will be welcomed. She’s thankful to be able to provide these services in her family’s hometown. But she’s more grateful to be a Black woman in the food justice space who’s willing to serve a community that needs fresh food resources the most.

“I feel like as a Black woman, and a woman period, we’re so dual,” Alexander said. “We have so much duality. We can be masculine, but in the same sentence we can be soft and not soft as in weak but soft as in caring, motherly, attentive, things like that, so I feel like as a planter, as a farmer, especially in an urban setting to where you’re working with providing for the community and providing for people, you have to be able to do both.”