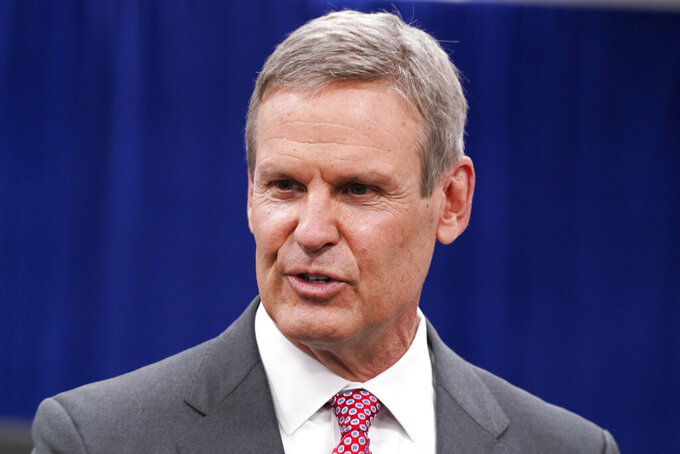 File-This Nov. 10, 2020, file photo shows Tennessee Gov. Bill Lee speaks with reporters in Nashville, Tenn. Lee has tweeted that his wife has mild symptoms of COVID-19 after testing positive for the coronavirus. The Republican governor said Saturday, Dec. 19, 2020, that he has tested negative for the virus but will be quarantined at the Governor’s Residence out of an abundance of caution. (AP Photo/Mark Humphrey, File)

NASHVILLE, Tenn. (AP) — Tennessee Gov. Bill Lee said Monday he delivered a weekend address on the pandemic to “cut through the politics” and implore those who shun masks to wear them without him imposing a “controversial” state requirement, bidding to end the nation's worst new COVID-19 infection surge per capita.

The Republican's address on Sunday came from quarantine, the day after Lee revealed that his wife Maria had tested positive for the new coronavirus. Lee said his wife had mild symptoms and was feeling much better Monday. He said he's tested negative and has no symptoms.

Lee's continued resistance to a statewide mask requirement — in place in all but a dozen states — drew intensified backlash from some prominent medical community voices. Critics have said they hoped the grave scenario would produce an about-face during what could be a make-or-break holiday season.

Instead, the governor announced in his prime time address Sunday that he was limiting indoor public gatherings to less than 10 people, exempting places of worship, weddings and funerals, and allowing smaller groups within the same place if they're six feet apart from others.

“The reason statewide mask mandates, I believe, are not helpful is because they’re controversial,” Lee said in a video conference Monday. “We know that they are. My message last night was to those people that don’t wear a mask. Everyone that wants a mask mandate is already wearing a mask. We know that. We all know that those who don’t wear masks, many of those people actually rebel against the idea of a mandate.”

State Health Commissioner Lisa Piercey has warned that coupling the Thanksgiving surge with another would “completely break our hospitals.” Lee pleaded Sunday with people to wear masks and not gather with other households.

According to Johns Hopkins researchers, Tennessee saw 1,759 new cases reported per 100,000 people over the past two weeks, first nationally for new cases per capita. One in every 104 people in Tennessee tested positive in the past week. The seven-day rolling average of daily deaths in Tennessee has grown from 55 on Dec. 6 to 87 on Sunday.

Lee is letting county officials decide whether to require masks, saying he's encouraged mayors to do so. About 69% of Tennesseans — but fewer than 30 of 95 counties — now face a mask requirement, according to data from the Vanderbilt University School of Medicine's health policy department.

Vanderbilt researchers also have found higher rates of COVID-19 deaths and hospitalizations in the areas that didn’t require masks. Doctors in a Tennessee physicians group that has been calling for the statewide mask requirement for months say their facilities and staffs are now more overwhelmed by COVID-19 patients than ever during the pandemic. Those echoing the call include the White House, former GOP U.S. Senate Majority Leader and surgeon Bill Frist of Tennessee and state Democrats.

The divide has become increasingly tense.

Democratic Rep. London Lamar said Tennessee is “setting a world example of how to kill people during a pandemic" by not requiring masks and other measures. Dr. Jason Martin of a physician’s group said Lee has “betrayed your oath and abandoned the people you were elected to serve,” and has rebutted Lee's contention that there's argument and dissention about "what’s the right tactic” among health professionals.

The president of the Tennessee Medical Association, Dr. Kevin Smith, said his group hasn't heard from any of its 9,000-plus physician members who oppose mask requirements now. The association is calling for mask mandates in counties that top 10 new cases per 100,000 people a day — currently, the whole state, since the best county was eight times worse in the last week, Smith said.

“Our country was conceived in liberty; I applaud the governor’s continued stand for individual freedoms and against ‘Big Brother’ government solutions," House Speaker Cameron Sexton said Friday. “I believe in Tennessee and its citizens, and I know we will all take the appropriate measures to protect ourselves, our families, and our neighbors.”

As of Monday morning, 16,500 hospital workers in the state had been vaccinated with their first dose, with 200,000 vaccinations expected in Tennessee by the end of year, said Health Commissioner Lisa Piercey.

Piercey said Tennessee’s reserve vaccines — about 975 from Pfizer-BioNTech and 5,000 from Moderna — will now be going into people’s arms, since the two vaccines ordered arrived intact. An Associated Press review of each state’s COVID-19 vaccine distribution plans shows Tennessee alone has specified it will hold back a small portion in “case of spoilage of vaccine shipped to facilities.”

So far, the state estimates receiving upwards of 67,000 doses of the Pfizer shot for hospital workers.

Tennessee has begun receiving a round of 115,000 doses of the Moderna vaccine, with priority for workers at smaller hospitals, first responders, long-term care facility residents and staff, home health providers and student health providers, she said.

The state is also getting an “unexpected” shipment of 40,000 more Pfizer doses this week, Piercey said.