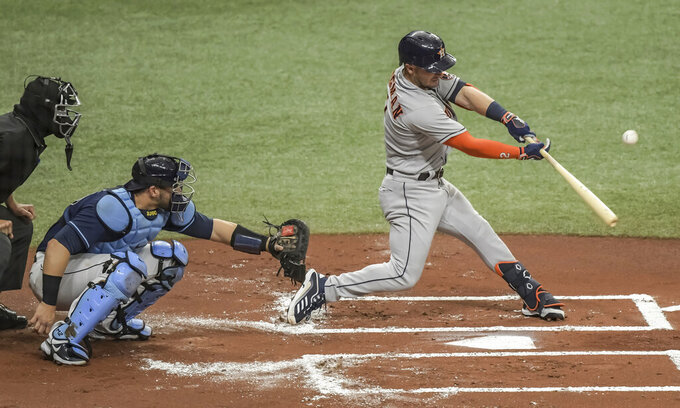 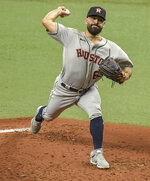 Jose Altuve doubled on the first pitch of the game, leading to a three-run inning. Houston got three hits in the first inning and only one more the rest of the game.

Urquidy (2-2) walked one and struck out five in winning his second straight start, which came on his 26th birthday. His day started with a phone call to his family in Mexico.

“I was very excited, very motivated, and I think that was a big part of this game,” said Urquidy, who pitched with a quicker tempo at the suggestion of manager Dusty Baker.

Urquidy retired 11 in a row in one stretch and allowed only one runner to get as far as second base.

Brooks Raley and Ryan Pressley pitched the final two innings for Houston. Pressley earned his fifth save in five tries after giving up a run on Yandy Diaz's groundball.

Alex Bregman hit an RBI single and Yuli Gurriel had a two-run single as the Astros won for the eighth time in 10 games.

“We’ve been winning games without hitting home runs. I don’t remember our last home run,” Baker said. “You’ve got to have a full-fledged game. The more ways you can win a big league game, the better your chances are.”

Josh Fleming (1-3) gave up three runs on three hits and five walks in six innings. All of the damage was done in the first.

“He’s got a really good sinker, and a good cutter, so he can split the plate,” Bregman said. “We did a really good job battling in that first inning, and that’s two good wins for us here.”

Urquidy became the second straight Astros pitcher to shut the Rays out through seven innings, following Lance McCullers on Friday night in the series opener.

Brandon Lowe had two hits for the Rays, who have scored 20 runs on 56 hits while striking out 91 times in the first nine games of their 10-game homestand. The Rays are three for their last 54 with runners in scoring position.

“It is baffling, but that’s just the way it goes sometimes,” Rays manager Kevin Cash said. “We can dwell on runners in scoring position, but we’re just not getting guys on base at the clip that we’re capable of right now. We’re being pitched tough. Urquidy did a nice job. He can ride that fastball to the top of the zone as well as any pitcher we face.”

“It’s tough to see our guys going through it,” he said. “They’re wearing it on their sleeves, like they have been now, for too long of a time.”

RHP Christian Javier (3-0, 0.87), who gave up two hits in seven shutout innings against Seattle on Tuesday night, will make his fifth start in Sunday's series finale against Rays LHP Rich Hill (1-1, 7.25 ). Hill has recovered from vaccine side effects.