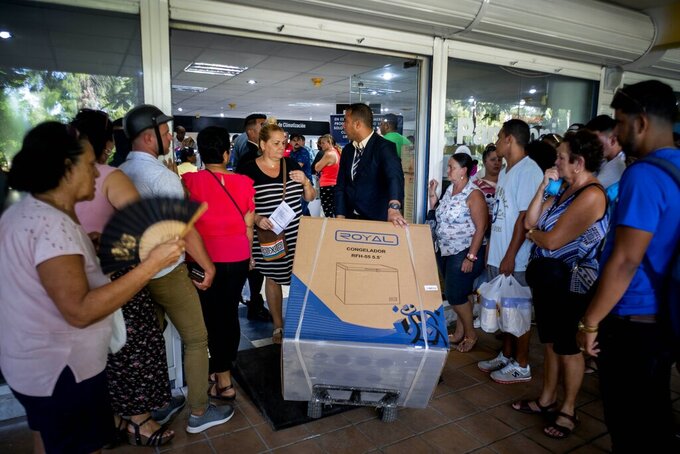 FILE - In this Oct 28, 2019 file photo, a worker wheels out a newly purchased freezer for a customer at a "dollar store" as shoppers wait to enter, in Havana, Cuba. A debit card backed by remittances that recently became popular in Cuba because people can use it to buy home appliances, food, and replacement parts has landed on the U.S. government’s restricted list, as of Monday, Sept. 28, 2020, in a statement by U.S. Secretary of State Mike Pompeo. (AP Photo/Ramon Espinosa, File)

HAVANA (AP) — A debit card backed by remittances that recently became popular in Cuba because people can use it to buy home appliances, food and replacement parts has landed on the U.S. government’s restricted list.

U.S. Secretary of State Mike Pompeo said in a statement Monday that Cuba’s military controls American International Services and uses parent company FINCIMEX and other entities to “charge fees and manipulate the remittance and foreign currency market...The profits earned from these operations disproportionately benefit the Cuban military, furthering repression of the Cuban people and funding Cuba’s meddling in Venezuela.

“The people should be able to receive funds from their family abroad without having to line the pockets of their oppressors,” he said.

FINCIMEX is a Cuban state company that processes remittances and issues the American International Services card, which the government began accepting in July amid a pandemic that worsened the lack of food on the island and sparked long lines for goods. The card became so popular that FINCIMEX temporarily stopped accepting applications in mid-August but resumed them this month.

The move comes as U.S. President Donald Trump woos the Cuban-American vote in Florida as elections loom. It drew sharp criticism from Bruno Rodríguez, Cuba’s foreign minister, who tweeted: “...it is a maneuver aimed at damaging the Cuban people and the family ties between both nations.”

The U.S. had already sanctioned Fincimex in June, causing panic among many families since remittances sent via Western Union were already limited last year to $1,000 per trimester. Some also rely on people called “mulas” who travel to Cuba to delivery money and other goods for a small commission, but there are currently no commercial flights to the island.

Cuba’s government does not make public the total amount of remittances sent to people on the island, but Miami-based Havana Consulting Group estimates it was $3.7 billion in 2019, a figure that dropped 40% after the pandemic began. Remittances and tourism help form the backbone of Cuba’s economy.

Pompeo's announcement comes less than a week after Trump’s administration barred U.S. travelers from bringing back Cuban cigars and rum or staying in government-owned hotels there. Trump has said those and other sanctions will remain until Cuba releases all political prisoners, legalizes political parties, holds free elections and respects the rights to free assembly and expression.

Cuba for its part has said it won't accept conditions placed on its sovereignty or impositions on its political model.