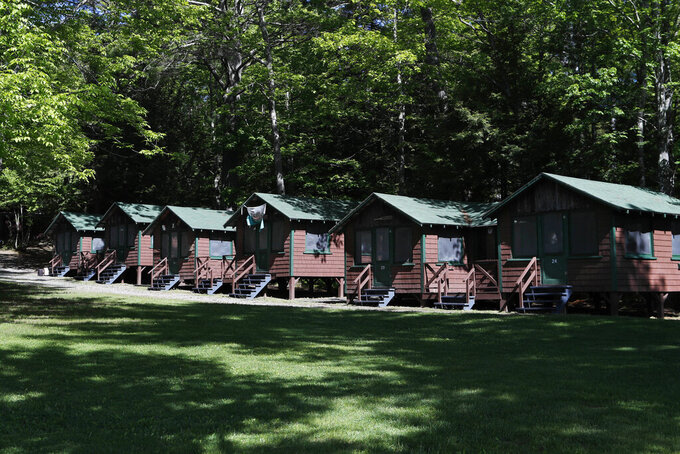 FILE - This Thursday, June 4, 2020 file photo shows a row of cabins at a summer camp in Fayette, Maine. On Friday, May 28, 2021, the Centers for Disease Control and Prevention posted guidance saying kids at summer camps can skip wearing masks outdoors, with some exceptions. Children who aren’t fully vaccinated should still wear masks outside when they’re in crowds or in sustained close contact with others – and when they are inside, and fully vaccinated kids need not wear masks indoors or outside, the CDC says. (AP Photo/Robert F. Bukaty, File)

Children who aren’t fully vaccinated should still wear masks outside when they’re in crowds or in sustained close contact with others – and when they are inside, the Centers for Disease Control and Prevention said. Fully vaccinated kids need not wear masks indoors or outside, the agency said.

The guidelines open the door to a more conventional camp experience and came out in the nick of time, just before camps start opening in some parts of the country, said Tom Rosenberg, president of the American Camp Association.

The guidance is the first in a wave of updates that will incorporate the CDC's recent decisions on masks and social distancing. Earlier this month, the agency said Americans don't have to be as cautious about masks and distancing outdoors, and that fully vaccinated people don't need masks in most situations.

Previously, the CDC advised that just about all people at camps should wear masks with only a few exceptions, like while they are eating, drinking or swimming.

But that was before adults began getting shots in December, and before the U.S. government authorized the Pfizer vaccine for 12- to 15-year-olds earlier this month.

About 2.5 million of the roughly 17 million U.S. kids in that age group have gotten at least one shot. A second dose is also required, three weeks after the first, and then it takes two more weeks before the vaccine fully takes effect.

That means that it will be mid-summer before kids in that age bracket are fully vaccinated. When that happens, “it’s going to be a camp experience that is much more like (before the pandemic),” said Erin Sauber-Schatz, who leads the CDC task force that prepares recommendations designed to keep Americans safe from COVID-19.

The new guidance also says social distancing — staying 3 to 6 feet from others — is recommended for the unvaccinated, but not for the vaccinated.

Camps likely will have mixed groups of vaccinated and unvaccinated kids and should be prepared to have mask and distancing guidelines in place, CDC officials said.

The camp guidance was updated in reaction to the CDC's May 13 decision to allow fully vaccinated Americans to stop wearing masks outdoors and in most indoor settings.

Some public health officials and others have criticized that announcement, partly because it seemed to conflict with other CDC guidance.

Sen. Tammy Duckworth, an Illinois Democrat, wrote this week to CDC Director Dr. Rochelle Walensky that “parents, caregivers and immunocompromised patients across the country may now have to navigate a confusing patchwork of recommendations and requirements in order to keep themselves and their families safe.”

Not helping matters: Agency officials have said their decision was based on growing medical evidence, but CDC officials provided few specifics. The agency did not post a science brief detailing the supporting evidence until Thursday.

The U.S. vaccination campaign has been an apparent success, with COVID-19 cases, hospitalizations and deaths declining. But some public health experts saw the rollback as prematurely removing a measure that had helped drive that success. Some also faulted the agency for poorly communicating the decision.

“There is no evidence that states, businesses, event organizers and so on were given any heads up that this announcement was pending.” said Dr. Irwin Redlener, a pandemic researcher at Columbia University’s Earth Institute.

A major concern has been that it can be hard to know who’s vaccinated, so unvaccinated people could quietly go maskless, causing cases to rise.

That concern was raised Thursday during a virtual U.S. Chamber of Commerce event with Walensky.

Suzanne Clark, the organization’s president, said many people were relieved that vaccinated could go many places without masks. “But I think employers are still trying to figure out what that means,” she added, noting questions like whether business owners can ask employees and customers if they’ve been vaccinated.

At the same forum, Polly Hanson of the American Public Transportation Association noted the apparent contradiction between CDC guidance that fully vaccinated people need not wear masks and a federal directive that says people who ride on public transportation have to wear them. She asked when that might change.

Redlener said in an email that the public is confused, in part because rules vary by state and city.

"Lack of consistency from one place to another is creating even more confusion,” she said.

Asked how camps will sort out who is vaccinated and who is not, Sauber-Schatz of the CDC said those decisions will have to be made at the local level.

Rosenberg, whose organization represents thousands of year-round and summer camps in the United States, noted medical forms are a common requirement and said many camps likely will ask for some kind of vaccination verification.

More than 80% of overnight camps did not open last year, some because states didn't allow them to, Rosenberg said. This year, all states are permitting day and overnight camps, though many expect to operate at lower capacity, he added.

“Demand is soaring” for camp this summer, as families seek to give kids a chance at normalcy, Rosenberg said.