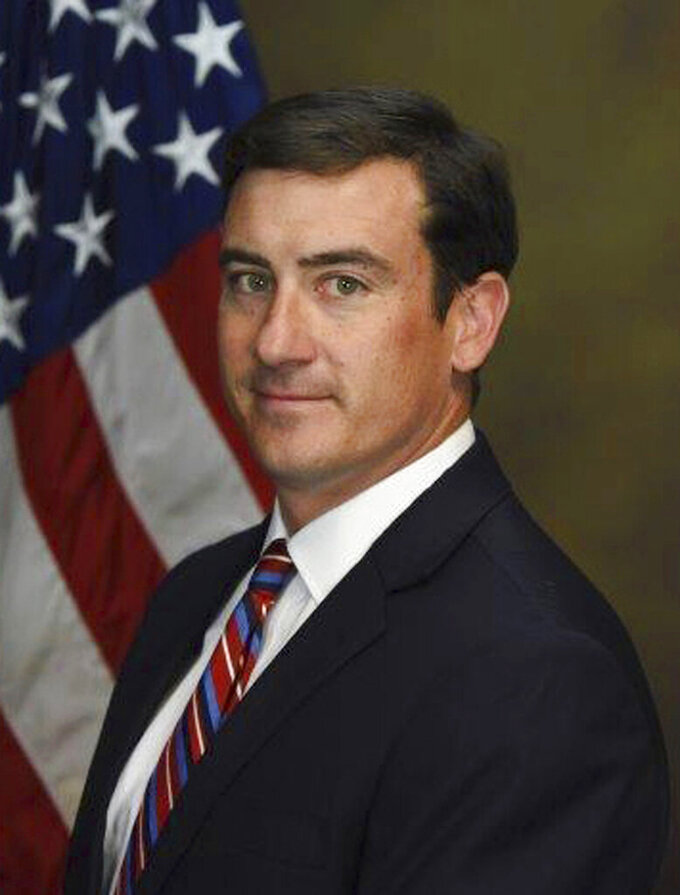 ALEXANDRIA, Va. (AP) — The leader of one of the nation's most prominent U.S. Attorney's offices said Tuesday he is resigning after nearly three years of prosecuting terrorists, spies and political operatives.

G. Zachary Terwilliger, U.S. Attorney for the Eastern District of Virginia, is joining the private sector with a post at the Vinson and Elkins law firm.

Terwilliger, 39, is the youngest U.S. Attorney in the country and has led the office since 2018, but his connections to the office go back to 1999, when he worked there as an intern. He also served for years there as a line prosecutor.

It is common for U.S. attorneys to resign their posts during presidential transitions, giving the new president an opportunity to appoint his own prosecutors.

Building the case and bringing the pair to Virginia required years of work, domestically and internationally, with competition from other U.S. Attorney offices looking to build the case.

“To have those two individuals sitting in the Eastern District of Virginia — innocent until proven guilty — but to have them here on U.S. soil knowing everything that went into the charges being built, getting the evidence we needed from the U.K. and then the lengths to make sure they were safely in custody during a global pandemic ... Iogistically, that was probably one of most difficult cases I’ve ever seen,” he said.

Terwilliger said he expects some people will always hold it against him that he was an appointee of President Donald Trump, but he does not think most people feel that way, and he said his independence as a prosecutor was never compromised.

“I didn’t see things done out of politics,” he said in an interview. "I can’t think of a single instance where someone turned around said ‘You will do this. This is your decision.’”

Before his time as U.S. Attorney, he served as chief of staff to Deputy Attorney General Rod Rosenstein, who wrote the memo that laid out justification for firing FBI Director James Comey for his handling of the 2016 investigation into Hillary Clinton's use of a private e-mail server, when most people believe Trump wanted Comey fired for pursuing the investigation into Russian election interference.

Rosenstein's memo specifically faulted Comey for a news conference he held in 2016, without informing the attorney general, that the investigation had concluded with insufficient evidence to bring criminal charges, but still commenting that Clinton and her team had been “extremely careless” in their handling of classified information.

“We all shared in the same belief that that press conference was highly inappropriate and just wrong," Terwilliger said. “Those reasons were absolutely legitimate. .. The FBI director is not an independent contractor. There’s an org chart. He or she may be appointed for 10 years but they report to the attorney general and the deputy attorney general, and that was the problem with what Director Comey did.”

National security cases like the Beatles prosecution, and successful espionage prosecutions of Chinese spies Kevin Mallory and Jerry Lee, have always been a priority in the Eastern District of Virginia, home to the Pentagon and CIA. Terwilliger also sought to make violent crimes and white-collar crimes a priority. He brought multiple fraud cases related to the coronavirus pandemic. He focused on violent crimes in the Tri-Cities region south of Richmond and in Hampton Roads, where he says some beleaguered communities needed federal partners to help chip away at unacceptable crime rates.

“He helped put actual boots on the ground here in Petersburg. He traveled to the city, walked the streets and met with citizens, and ensured them that he was committed to providing the city with the necessary resources,” said Petersburg police Chief Travis Christian in a statement.

Sometimes his priorities drew criticism. Early in his tenure, U.S. District Judge Leonie Brinkema criticized the number of cases he brought for illegal entry into the U.S. Terwilliger, though, defended the policy, saying the majority of those cases originated because of some other underlying crime, like domestic violence or drunken driving.

Terwilliger's resignation takes effect Jan. 15. First Assistant Raj Parekh will serve as acting U.S. Attorney and is the first minority to lead the office in its 232-year history.