US, Australian swimmers to face off in Duel in the Pool 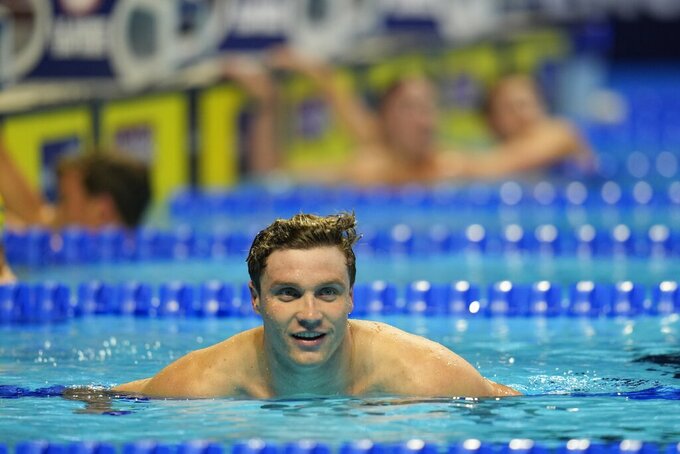 FILE - Bobby Finke, of the United States, reacts after winning the men's 1500 freestyle during wave 2 of the U.S. Olympic Swim Trials on Sunday, June 20, 2021, in Omaha, Neb. World swimming powers Australia and the United States will contest a Duel in the Pool competition in August. It's the first time the strong American and Australian squads have competed against each other in a match-race situation since 2007. (AP Photo/Jeff Roberson, File)

SYDNEY (AP) — The United States and Australia will contest a Duel in the Pool competition in August, the first time the world swimming powers will have competed against each other in a match-race situation since 2007.

The countries collected 50 swimming medals between them at last year’s Tokyo Olympics. Each country will send 30 swimmers to compete at Sydney’s Olympic Aquatic Centre and Bondi Beach for open-water events from Aug. 19-21.

First held in 2003, the Duel in the Pool was designed to pit the two powerful swimming nations against each other after they dominated international competition for the best part of a decade. The 2003 and 2005 versions were held in the U.S., with the 2007 duel back at the Olympic pool in Sydney.

Swimming Australia on Wednesday said new race and relay formats will be among new innovations for the made-for-television event.

“The world’s best thrive when competing against one another, and our teams have established an exciting history,” USA Swimming president Tim Hinchey said in a statement.