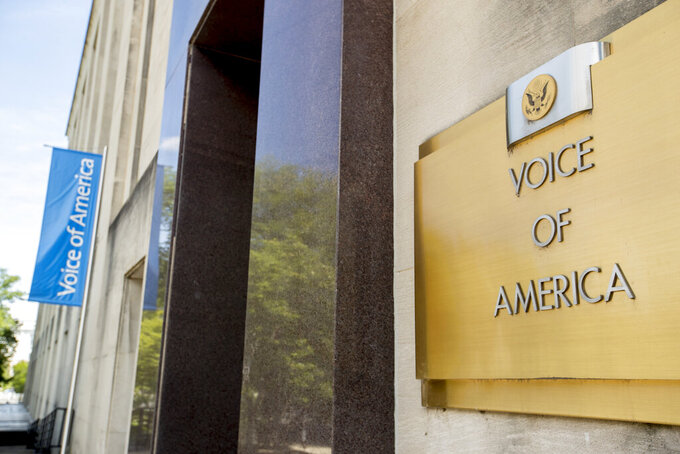 WASHINGTON (AP) — The new chief of U.S.-funded international broadcasting on Wednesday fired the heads of at least three outlets he oversees and replaced their boards with allies, in a move likely to raise fears that he intends to turn the Voice of America and its sister outlets into Trump administration propaganda machines.

U.S. Agency for Global Media CEO Michael Pack informed those he dismissed in email notices sent late Wednesday just hours after he had sought to play down those concerns in an email to staff saying he is committed to ensuring the independence of the broadcasters who are charged with delivering independent news and information to audiences around the world.

Pack, a conservative filmmaker and one-time associate of President Donald Trump’s former political adviser Steve Bannon, said in a notices to those fired that he was taking the step consistent with his authority as the new CEO of the overall agency. It gave no reason for his decision.

He added in the notices that he expected the agency's new board of directors, chaired by himself, to approve the decision. In a separate message, Pack also announced that he had removed all the current members of the broadcasters' respective boards and installed his own team, with officials from various agencies, including the Office of Management and Budget and Department of Housing and Urban Development.

The firings came after Pack had tried to allay mounting concerns about his intentions at the agency in an email to staff in which he said he is “committed to maintaining the agency’s independence and adhering to VOA’s charter and the principles.”

The top Democrat on the Senate Foreign Relations Committee, Sen. Bob Menendez of New Jersey, denounced the firings as an “egregious breach” of the agency's mission. Menendez had led an unsuccessful fight to block or at least delay Pack's confirmation.

“As feared, Michael Pack has confirmed he is on a political mission to destroy the USAGM’s independence and undermine its historic role," Menendez said. “The wholesale firing of the agency’s network heads, and disbanding of corporate boards to install President Trump’s political allies is an egregious breach of this organization’s history and mission from which it may never recover.”

VOA had come under severe criticism from Trump and his supporters for its reporting on China and the coronavirus pandemic, and the resignations came as Trump made clear he wanted a change in VOA's leadership.

Pack began his role just last week after a contentious Senate confirmation process during which Democrats questioned his fitness for the post.

“I am fully committed to honoring VOA’s charter, the missions of the grantees, and the independence of our heroic journalists around the world,” Pack wrote in the email.

“I think we all agree the agency has an important mission, and we are being called on to perform it at an historically important time,” he said. “My goal is to provide leadership that will help each of you further that mission.”

That mission has been made more critical as “America’s adversaries have stepped up their propaganda and disinformation efforts. They are aggressively promoting their very different visions of the world,” he wrote.

Pack had previously worked for the agency under earlier incarnations as well as the PBS parent Corporation for Public Broadcasting and reminded his new employees of those experiences during which he said he had “learned the importance of building a team that works toward a common purpose.”

Pack said his first priority is to raise employee morale, which has taken a hit in recent months with attacks from the White House and came to a head on Monday when VOA Director Bennett and her deputy announced their resignations, saying that Pack is entitled to have people of his choice in important positions.

Trump and his supporters have been sharply critical of coronavirus reporting by the outlet that ran counter to the administration narrative on China’s response to the outbreak. The White House went so far as to blast VOA in a press statement and directed the Centers for Disease Control and Prevention to not cooperate with its journalists, an unusual attack on a venerable organization that has sought to be an objective source of news despite its government ties.

While not unexpected, the departures of Bennett and Sugawara sparked fears of a significant purge of U.S. Agency for Global Media management. Late Tuesday, the chairman of the House Foreign Affairs Committee Rep. Eliot Engel, D-N.Y., warned Pack publicly against targeting career officials.

“My fear is that USAGM’s role as an unbiased news organization is in jeopardy under (Pack's) leadership," Engel said in a statement. “USAGM’s mission is ‘to inform, engage, and connect people around the world in support of freedom and democracy’ — not to be a mouthpiece for the president in the run up to an election ... And Mr. Pack needs to understand that USAGM is not the Ministry of Information.”