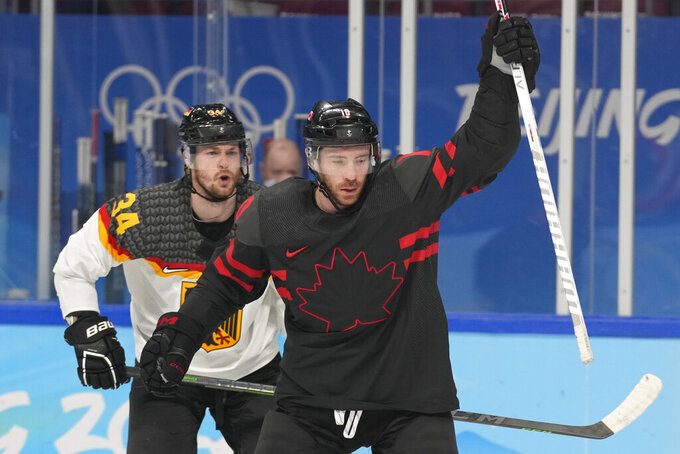 Canada's Ben Street (10) celebrates after scoring a goal against Germany during a preliminary round men's hockey game at the 2022 Winter Olympics, Thursday, Feb. 10, 2022, in Beijing. Behind Street is Germany's Tom Kuhnhackl (34). (AP Photo/Petr David Josek)

BEIJING (AP) — Jeremy Colliton was not sure what would have happened if the pre-Olympic scrimmage between the United States and Canada had gone on another period. Some chippiness might've gone over the edge.

He and everyone else get a chance to find out when the U.S. and Canada face off for real Saturday afternoon in each team's second preliminary round game. Much has changed since the scrimmage, including Claude Julien returning from injury to reassume Canada coaching duties from Colliton, but the rivalry is just as heated as it has been for decades.

The scrimmage showed that to be true even without NHL talent in Beijing. Canada forward Mason McTavish sent U.S. defenseman Brock Faber to the ice with a big hit on the first shift, and that game didn't even count.

This one — set for 12:10 p.m. in Beijing and 11:10 p.m. EST Friday night — could go a long way toward determining which team wins the group, avoiding the qualification round and earning a spot in the quarterfinals. Like the U.S., Canada won its first game, an impressive 5-1 defeat of Germany, and early on looks every bit like a gold medal contender.

“We’ve got to bring our A-game,” said U.S forward Sean Farrell, who had a hat trick and two assists against China. “They’re going to be a fast, physical team, and we’re going to have to bring our best game.”

As much as Canada goaltender Edward Pasquale isn't putting much stock in the happenings of the scrimmage, it showed his teammates what the U.S. might be capable of.

“Young, really good feet, and they can skate really well," Canada defenseman Maxim Noreau said. "The difference when it’s an exhibition game like that (is) it’s not as physical as normal. It’s kind of our bread and butter of getting to the net, throwing our bodies around, even blocking shots.”

Quinn figures physicality will be a focus of each U.S. opponent the rest of the Olympics. China started to do that, but it's the smallest team in the tournament and Canada is among the biggest.

The U.S. roster features 15 college players who typically don't face the kind of punishment Canada's veterans are eager and able to dish out. Adding 6-foot-2 defenseman Jake Sanderson, who was a late arrival in Beijing after getting stuck in virus protocol in Los Angeles., could help the Americans' ability to go hit for hit and battle for battle with the Canadians — if he's available.

Even if Sanderson is not ready to go until the U.S. takes on Germany on Sunday night, the U.S. and Canada are preparing for an intense matchup.

“For sure it’ll be a little different field than the scrimmage,” Canada captain Eric Staal said. “I’m sure we’ll talk about what we can do to try and exploit some of the things against them. Always a treat to play Canada-U.S.”

Another thing that makes it a treat is the comparable styles the teams like to play. For all their differences, there's still a priority in North American hockey to move bodies and the puck north and south, and that means plenty of contact and usually entertainment.

“They’re a lot like us,” U.S. center Matty Beniers said. “They’re skilled, they got speed and they got some depth and some older veterans that know how to win games — tight games. I think we’re pretty similar teams, and I think it’s just going to be who wants it more.”