US carries out rare execution during presidential transition 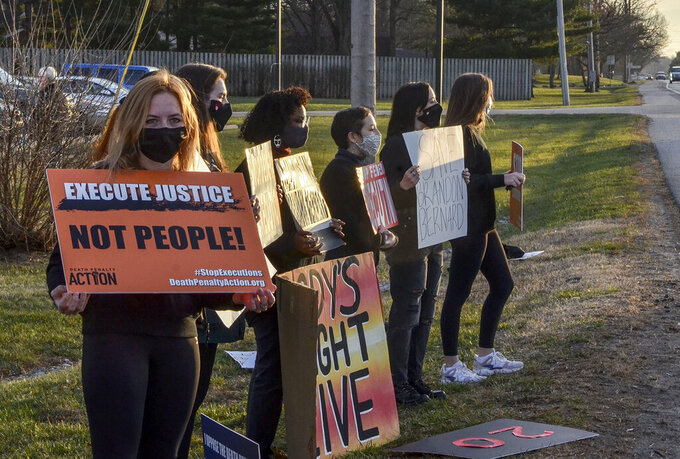 Protesters line Prairieton Road across from the Federal Execution Chamber, Thursday, Dec. 10, 2020 in Terre Haute, Ind. The execution Brandon Bernard, convicted in the 1999 killing of two youth ministers in Texas is scheduled Thursday at the federal prison in Terre Haute, Indiana.. (Austen Leake/The Tribune-Star via AP) 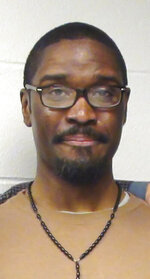 TERRE HAUTE, Ind. (AP) — The Trump administration Thursday carried out its ninth federal execution of the year in what has been a first series of executions during a presidential lame-duck period in 130 years, putting to death a Texas street-gang member in the slayings of a religious couple from Iowa more than two decades ago.

Four more federal executions, including one Friday, are planned in the weeks before President-elect Joe Biden’s inauguration. One was carried out in late November.

The case of Brandon Bernard, who received a lethal injection of pentobarbital at a U.S. prison in Terre Haute, Indiana, was a rare execution of a person who was in his teens when his crime was committed.

With witnesses looking on from behind a glass barrier separating them from a pale-green death chamber, the 40-year-old Bernard was pronounced dead at 9:27 p.m. Eastern time.

He directed his last words to the family of the couple he played a role in killing, speaking with striking calm for someone who knew he was about to die.

“I’m sorry,” he said, lifting his head and looking at witness-room windows. “That’s the only words that I can say that completely capture how I feel now and how I felt that day.”

As he spoke, he showed no outward signs of fear or distress, speaking lucidly and naturally. He spoke for more than three minutes, saying he had been waiting for this chance to say he was sorry — not only to the victims' family, but also for the pain he caused his own family.

Referring to his part in the killing, he said: “I wish I could take it all back, but I can’t."

Bernard was 18 when he and four other teenagers abducted and robbed Todd and Stacie Bagley on their way from a Sunday service in Killeen, Texas, during which Bernard doused their car with lighter fluid and set it on fire with their bodies in the back trunk.

Federal executions were resumed by Trump in July after a 17-year hiatus despite coronavirus outbreak in U.S. prisons.

Todd Bagley’s mother, Georgia, spoke to reporters within 30 minutes of the execution, saying she wanted to thank Trump, Attorney General William Barr and others at the Justice Department.

“Without this process,” she said, reading from a statement, “my family would not have the closure needed to move on in life." She called the killings a “senseless act of unnecessary evil."

But she stopped reading from the prepared text and became emotional when she spoke about the apologies from Bernard before he died Friday and from an accomplice, Christopher Vialva, the ringleader of the group who shot the Bagley's in the head before the car was burned. He was executed in September.

“The apology and remorse ... helped very much heal my heart,” she said, beginning to cry and then recomposing herself. “I can very much say: I forgive them.”

Earlier inside the death chamber, Bernard lay on a cross-shaped gurney with IV lines running into both arms. He looked back when a U.S. marshal picked up a phone and asked if there were any reasons not to proceed. Bernard reacted calmly as the marshal put down the phone and said the execution could proceed.

Bernard didn't exhibit the labored breathing and constant twitching of others executed previously had. A minute after the lethal injection, his eyes slowly closed and he barely moved again.

About 20 minutes later, faint white blotches appeared on his skin and someone entered from a chamber door, listened to his heart, felt for a pulse, then walked out. Seconds later, an official said Bernard was dead.

Alfred Bourgeois, a 56-year-old Louisiana truck driver, is set to die Friday for killing his 2-year-old daughter by repeatedly slamming her head into a truck’s windows and dashboard. Bourgeois’ lawyers alleged he was intellectually disabled and therefore ineligible for the death penalty, but several courts said evidence didn’t support that claim.

Before Bernard's execution, Kardashian West tweeted that she’d spoken to him earlier: “Hardest call I’ve ever had. Brandon, selfless as always, was focused on his family and making sure they are ok. He told me not to cry because our fight isn’t over.”

Just before the execution was scheduled, Bernard’s lawyers filed papers with the Supreme Court seeking to halt the execution, but the high court denied the request, clearing the way for the execution to proceed.

Bernard had been crocheting in prison and even launched a death-row crocheting group in which inmates have shared patterns for making sweaters, blankets and hats, said Ashley Kincaid Eve, an anti-death penalty activist.

Federal executions during a presidential transfer of power also are rare, especially during a transition from a death-penalty proponent to a president-elect like Biden opposed to capital punishment. The last time executions occurred in a lame-duck period was when Grover Cleveland was president in the 1890s.

Defense attorneys have argued in court and in a petition for clemency from Trump that Bernard was a low-ranking member of the group. They say both Bagleys were likely dead before Bernard set the car on fire, a claim that conflicts with government testimony at trial.

The case prompted calls for Trump to intervene, including from one former prosecutor who defended the death sentence on appeal who now says racial bias may have influenced the nearly all-white jury’s imposition of a death sentence against Bernard, who is Black. Several jurors have also since said publicly that they regret not opting for life in prison instead.

The teenagers approached the Bagleys in the afternoon on June 21, 1999, and asked them for a lift after they stopped at a convenience store — planning all along to rob the couple. After the Bagleys agreed, Vialva, the oldest of the group at 19, pulled a gun and forced them into the trunk.

The Bagleys, both of whom were in their 20s, spoke through an opening in the back seat and urged their kidnappers to accept Jesus as they drove around for hours trying to use the Bagleys' ATM cards. After the teens pulled to the side of the road, Vialva walked to the back and shot the Bagleys in the head.

The central question in the decision to sentence Bernard to death was whether Vialva’s gunshots or the fire set by Bernard killed the Bagleys.

Trial evidence showed Todd Bagley likely died instantly. But a government expert said Stacie Bagley had soot in her airway, indicating smoke inhalation and not the gunshot killed her. Defense attorneys have said that assertion wasn’t proven. They’ve also said Bernard believed both Bagleys were dead and that he feared the consequences of refusing the order of the higher ranking Vialva to burn the car to destroy evidence.

The first series of federal executions over the summer were of white men. Four of the five inmates set to die before Biden’s Jan. 20 inauguration are Black men. The fifth is a white woman who would be the first female inmate executed by the federal government in nearly six decades.