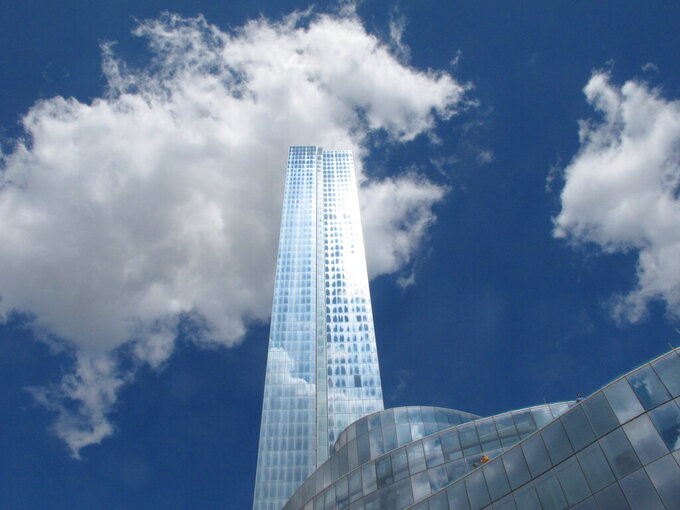 This May 3, 2021 photo shows the exterior of the Ocean Casino Resort in Atlantic City, N.J. On Tuesday, May 11 the American Gaming Association released statistics showing that the U.S. commercial casino industry matched its best quarter ever in terms of revenue in the first three months of 2021, taking in more than $11.1 billion as customers continued returning amid the COVID-19 pandemic. (AP Photo/Wayne Parry)

Figures released Tuesday by the American Gaming Association, the casino industry's national trade group, show the nation's commercial casinos took in over $11.1 billion in the first quarter of this year.

That matched the industry's best quarter in history, the third quarter of 2019. The figures do not include tribal casinos.

And March was a particularly good month: 12 states reported their highest-ever levels of monthly gambling revenue.

The numbers were even more heartening to industry executives because they came while most casinos were still operating under capacity restrictions designed to slow the spread of the virus.

“Today’s report shows gaming’s comeback is ahead of schedule,” said Bill Miller, the association's president and CEO. “Throughout the COVID-19 pandemic, our industry has faced numerous challenges head-on while still reopening responsibly and providing a safe, exciting environment for customers. The gaming industry is generating these impressive results with one hand tied behind our back as capacity and amenity restrictions remain across the country.”

Some state-mandated closures remained in effect in the first quarter of this year. Casinos in Pennsylvania and Illinois were allowed to reopen from a second mandated shutdown on January 4 and January 16, respectively. In early March, New Mexico became the last commercial gaming market to resume operations after having been shuttered for just under a year.

Terry Glebocki, CEO of the Ocean Casino Resort in Atlantic City, said customer volumes at her property have been increasing this year, due in part to a multimillion-dollar reinvestment the casino is making.

But there is another factor at play, she said.

“I do think we're seeing more and more people feeling more comfortable coming out” to casinos, she said. “There's a ton of pent-up demand out there. People want to go out and have fun, and that's what you do at a casino.”

Callie Driehorst, a spokeswoman for MGM Resorts International, said things are looking up.

“We’ve seen significant progress since the start of the year in COVID trends, vaccinations, consumer sentiment, and state-by-state operating restrictions,” she said. “It’s been exciting to see our domestic business improve significantly, and to play a role in the industry’s recovery. As business trends continue to improve, we’ll continue to position our business for long-term, sustainable growth."

Traditional brick-and-mortar casino games generated 90% of their first-quarter 2019 revenue. March was particularly strong, with revenue from slots and table games coming within 1% of March 2019 totals.

Sports betting revenue set a new quarterly record this year at $961 million, up 270% from a year earlier, and surpassing 2019’s full-year total of $909 million.

Helped by the successful opening of online casinos in Michigan, internet gambling generated $784 million nationwide in the first quarter of this year, more than three times the amount from a year ago.