US Catholic bishops may press Biden to stop taking Communion 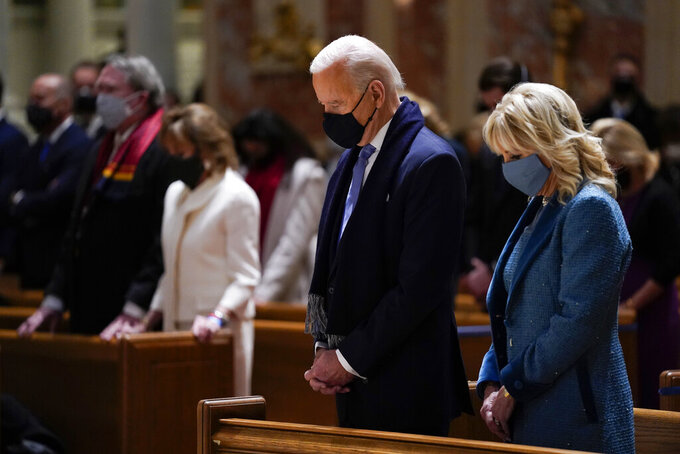 FILE - In this Wednesday, Jan. 20, 2021 file photo, President-elect Joe Biden and his wife, Jill Biden, attend Mass at the Cathedral of St. Matthew the Apostle during Inauguration Day ceremonies in Washington. When U.S. Catholic bishops hold their next national meeting in June 2021, they’ll be deciding whether to send a tougher-than-ever message to President Joe Biden and other Catholic politicians: Don’t partake of Communion if you persist in public advocacy of abortion rights. (AP Photo/Evan Vucci)

When U.S. Catholic bishops hold their next national meeting in June, they’ll be deciding whether to send a tougher-than-ever message to President Joe Biden and other Catholic politicians: Don’t receive Communion if you persist in public advocacy of abortion rights.

At issue is a document that will be prepared for the U.S. Conference of Catholic Bishops by its Committee on Doctrine, with the aim of clarifying the church’s stance on an issue that has repeatedly vexed the bishops in recent decades. It’s taken on new urgency now, in the eyes of many bishops, because Biden — only the second Catholic president — is the first to hold that office while espousing clear-cut support for abortion rights.

Such a stance, by a public figure, is “a grave moral evil,” according to Archbishop Joseph Naumann of Kansas City, Kansas, who chairs the USCCB’s Committee on Pro-Life Activities and believes it’s necessary to publicly rebuke Biden on the issue.

“Because President Biden is Catholic, it presents a unique problem for us,” Naumann told The Associated Press. “It can create confusion. ... How can he say he’s a devout Catholic and he’s doing these things that are contrary to the church’s teaching?”

The document, if approved, would make clear the USCCB’s view that Biden and other Catholic public figures with similar viewpoints should not present themselves for Communion, Naumann said.

In accordance with existing USCCB policy, it would still leave decisions on withholding Communion up to individual bishops. In Biden’s case, the top prelates of the jurisdictions where he frequently worships — Bishop W. Francis Malooly of Wilmington, Delaware, and Cardinal Wilton Gregory of Washington, D.C. — have made clear that Biden is welcome to receive Communion at churches they oversee.

The document-in-the-works results from a decision in November by the USCCB’s president, Archbishop José Gomez of Los Angeles, to form a working group to address the “complex and difficult situation” posed by Biden’s stances on abortion and other issues that differ from official church teaching. Before disbanding, the group proposed the drafting of a new document addressing the issue of Communion — a project assigned to the doctrine committee.

The committee has not released details about its work. Naumann said the matter will be discussed at the USCCB’s meeting in June and the bishops will vote on whether the committee should continue working on the document so it could be publicly released later.

A two-thirds majority would be needed for work to proceed, Naumann said. But even critics of the initiative, such as Bishop John Stowe of Lexington, Kentucky, predict the endeavor will win overwhelming approval.

Stowe is among a relatively small group of U.S. bishops who worry that the USCCB’s emphasis on abortion is undercutting Pope Francis’ exhortations for the church to also stress such issues as climate change, immigration and inequality. Stowe also worries that the U.S. bishops are missing a chance to find common ground with Biden on such issues.

“If a politician is targeted as a negative example by his own church, that sets a sad context in which the church can deal with this Catholic president,” Stowe said. “It contributes to the polarization of the church and of society.”

“I do not see how depriving the president or other political leaders of the Eucharist based on their public policy stance can be interpreted in our society as anything other than a weaponization of the Eucharist ... to pummel them into submission,” McElroy said during an online forum in February.

Nonetheless, the bishops wanting to send a tough message to Biden are determined to press ahead.

“There’s a growing sense of urgency,” said San Francisco Archbishop Salvatore Cordileone. “Abortion is not just one among many important issues. ... It’s a direct attack on human life.”

Cordileone envisions a statement from the USCCB to Biden and others “that would move them in their conscience.”

“They need to understand the scandal that is caused when they say they are faithfully Catholic and yet oppose the church on such a basic concept,” he said.

American Cardinal Raymond Burke has broached the possibility of Catholicism’s ultimate sanction. He says politicians who “publicly and obstinately” support abortion are “apostates” who not only should be barred from receiving Communion but deserve excommunication.

Bishops already troubled by Biden’s stance on abortion grew more dismayed by three measures from his administration in mid-April.

It lifted restrictions on federal funding for research involving human fetal tissue. It rescinded a Trump administration policy barring organizations such as Planned Parenthood from receiving federal family planning grants if they also refer women for abortions. And it said women seeking an abortion pill will not be required to visit a doctor’s office or clinic during the COVID-19 pandemic, enabling women to get a prescription via telemedicine and receive the pill by mail.

Naumann, who issued strongly worded denunciations after each action, told AP he was frustrated that Biden could authorize those while identifying as a devout Catholic.

“He doesn’t have the authority to teach what it means to be Catholic — that’s our responsibility as bishops,” Naumann said, “Whether intentional or not, he’s trying to usurp our authority.”

The Vatican has not ruled on the specific matter of Communion and politicians supporting abortion in a major teaching document, though the church’s in-house canon law says people in a situation of persistent sin shouldn’t be allowed to receive Communion. It has also issued guidelines for the behavior of Catholics in political life exhorting them to uphold principles consistent with church doctrine.

The then-head of the Vatican’s doctrine office, Cardinal Joseph Ratzinger, the future Pope Benedict XVI, told U.S. bishops in 2004 that priests “must” deny the sacrament if a politician goes to receive Communion despite an “obstinate persistence in manifest grave sin,” including the sin of consistently campaigning for permissive abortion laws.

Ratzinger wrote a confidential letter outlining the principles to U.S. bishops in response to their question about whether to deny Communion to John Kerry, who was the Democratic nominee for president. In the end the bishops ignored Ratzinger’s advice and voted instead for the policy currently in place allowing bishops to decide themselves whether to withhold it.

The document being drafted by the doctrine committee may contain some guidelines for bishops, Cordileone said, but it will not seek to strip their decision-making authority.

“This will put the burden of responsibility on Catholics who are prominent in public life,” he said.

Archbishop Samuel Aquila of Denver, who has sharply criticized Biden’s abortion stance, told the AP he favors creation of a national policy on Communion, as opposed to the current “patchwork approach.” He said bishops should first have a private conversation with an individual deemed to be in a state of sin, and deny Communion if they persist.

Edward Peters, who teaches canon law at Sacred Heart Major Seminary in Detroit, said the USCCB would have the option of seeking Vatican approval for a unified Communion policy applying to all bishops. But he doubted such a request would be made.

“The bishops’ conference does have broad responsibility to speak out on matters that impact the effectiveness and clarity of Church’s mission,” Peters said via email. “The bad example being given by some high-profile Catholics who consistently fail to protect innocent human life is surely one of those matters.”

Some Catholic academics are uneasy about the document.

“Are you really going to deny Communion for the president of the United States?” asked Margaret McGuinness, a religion professor at La Salle University in Philadelphia. “I don’t think this is going to shake his faith. ... I don’t see anything constructive coming out of it.”

She noted that a majority of U.S. Catholics, according to polls, say abortion should be legal in at least some cases.

Steven Millies, a professor of public theology at Catholic Theological Union in Chicago, said the Catholic church received significant financial support in recent years from conservative philanthropists who are skeptical of Francis and favored Donald Trump over Biden in the 2020 election.

“What we’re seeing now is an effort to please donors who want a church which will wage a culture war,” Millies said.