US cervical cancers fall but other sex-related cancers rise 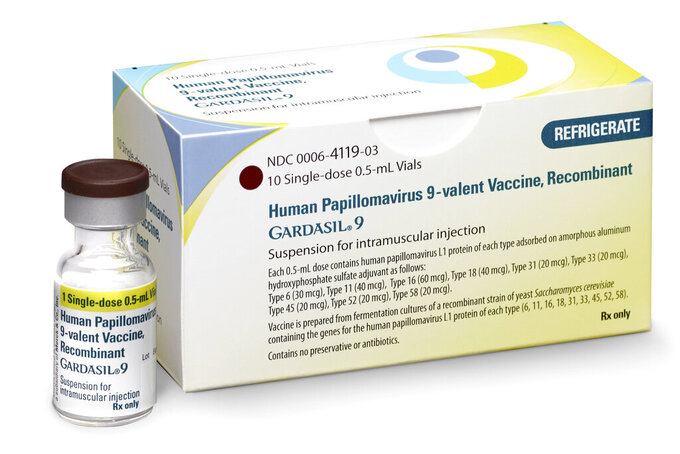 FILE - This undated image provided by Merck in October 2018 shows a vial and packaging for the Gardasil 9 vaccine. According to a study released on Wednesday, May 19, 2021, screening and the HPV vaccine have led to dramatic drops in cervical cancers over the last two decades in the U.S., but the gains are almost offset by a rise in other tumors caused by the virus. (Merck via AP)

Screening and the HPV vaccine have led to drops in cervical cancers over the last two decades in the U.S., a new study finds, but the gains are offset by a rise in other tumors caused by the virus.

“A common misperception is the HPV vaccine has solved the problem of HPV-associated cancers. Unfortunately, that couldn’t be further from the truth,” said Dr. Maura Gillison of the University of Texas MD Anderson Cancer Center, who was not involved in the study.

Results were released Wednesday by the American Society of Clinical Oncology ahead of presentation at its annual meeting next month.

HPV, or human papillomavirus, is the nation’s most common sexually spread infection. Most HPV infections cause no symptoms and go away without treatment.

But some cause genital warts and others develop into cancers, about 35,900 each year, according to the Centers for Disease Control and Prevention.

In the U.S., the HPV vaccine has been recommended since 2006 for girls at age 11 or 12, and since 2011 for boys the same age, and catch-up shots are recommended for anyone through age 26 who hasn't been vaccinated. Experts agree it will take years to see the true impact because it can take decades for a chronic HPV infection to turn into cancer.

What's driving the HPV cancer trends is the youthful sexual behavior of baby boomers before the vaccine was out. The vaccine works best when given at younger ages before people are exposed to HPV through sexual activity, so it arrived too late for the boomers.

“Sexual trends began changing and liberalizing in the late ’60s, and continued into the ’70s and ’80s, until the HIV epidemic” caused people to be more cautious, said Dr. Ernest Hawk, cancer prevention specialist at MD Anderson, who was not involved in the study.

“People had many more partners and many more types of interactions," Hawk said.

The biggest drop in cervical cancers was seen in young women who would have been the first to get the HPV vaccine when they were preteens, said lead author Dr. Cheng-I Liao of Kaohsiung Veterans General Hospital in Taiwan. That suggests the vaccine played a role, along with Pap tests, which have been driving down cervical cancer cases for decades.

No screening tests exist for the other cancers, although research is underway.

One vaccine, Merck's Gardasil 9, is available in the U.S. The cost is fully covered by private and public health insurance.

Vaccination had been increasing before the COVID-19 pandemic and infections were declining dramatically among young women. Research suggests the vaccine was preventing oral infections in men too.

But vaccination dropped off during lockdowns as families missed routine doctor's appointments, Hawk said. Vaccinating middle and high school students for COVID-19 will give doctors a chance to encourage HPV shots at the same time, he said.