US Coast Guard continues search for 10 Cubans missing at sea 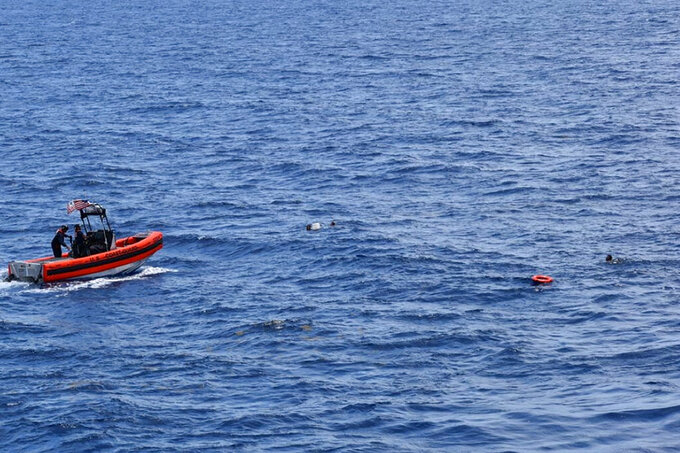 MIAMI (AP) — A search for 10 Cubans missing from a boat capsize continued Friday, a day after the U.S. Coast Guard rescued eight other passengers and pulled two bodies from the water.

The group was first spotted on routine patrol 18 miles (29 kilometers) southwest of Key West, Florida, on Thursday. Crews searched overnight for 10 men, continuing and expanding the area Friday, officials said. The vessel sank after it capsized, so it was not clear what type of craft the group used to travel across the Florida Straits.

The survivors were transferred to a Coast Guard vessel to receive food, water and medical attention. They were medically screened and remain aboard a Coast Guard cutter, officials said. Cubans and other foreign nationals found at sea are generally repatriated, but Coast Guard spokesman Lt. Cmdr. Jason Neiman said the next step “has not been determined.”

Capt. Adam Chamie, Coast Guard Commander of Sector Key West, said the group of survivors included two women and six men. They were spotted by a vessel patrolling the area off the Florida Keys.

“They were staying on top of the water, using their arms and legs for power,” he said. “They were in need of help.”

Other agencies, including the U.S. Navy, U.S. Customs and Border Protection and the Florida Fish and Wildlife Conservation Commission, have joined the search.

Coast Guard crews have interdicted 308 Cubans at sea since October, 200 of them in the past two months. Only 49 Cubans were interdicted by the agency between October 2019 and September 2020, when the coronavirus pandemic halted travel and prompted lockdowns.

The figure this year is on pace to surpass the 313 interdictions between October 2018 and September 2019 and already higher than those seen in the year prior to that. But the levels are still much lower than the thousands who were arriving before January 2017. That's when President Barack Obama halted the United States' “wet foot, dry foot” policy, which granted residency to all Cubans who set foot on dry land a year after their arrival.

The uptick comes as the pandemic, financial reforms and restrictions imposed by President Donald Trump's administration have battered the Cuban economy. It shrank 11% last year as a result of a collapse in tourism and remittances.