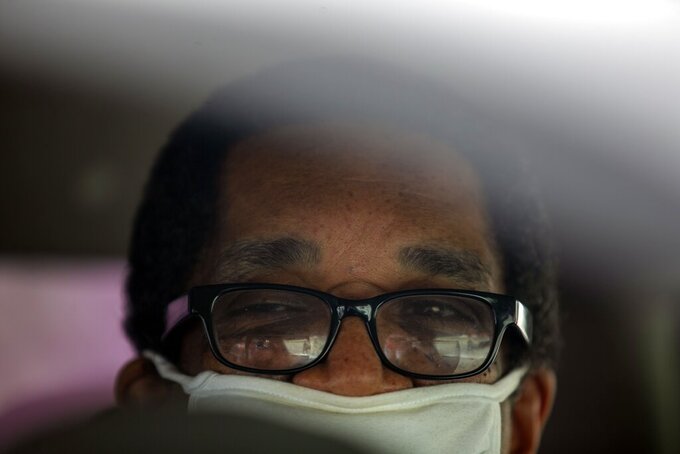 Former paramilitary leader Emmanuel Constant who has just been deported from the US, sits in a police vehicle after being detained by Haitian police at his arrival to the Toussaint Louverture International Airport in Port-au-Prince, Haiti, Tuesday, June 23, 2020. Human rights groups have accused Constant of killing and torturing Haitians when he became the leader of the Front for the Advancement and Progress of Haiti after President Jean-Bertrand Aristide's presidency was toppled in 1991. (AP Photo/Dieu Nalio Chery)

PORT-AU-PRINCE, Haiti (AP) — Former paramilitary leader Emmanuel Constant was deported from the U.S. on Tuesday and arrested as soon as he landed in Haiti, where he faces murder and torture charges stemming from killings committed during the political upheaval of the 1990s that involved the U.S. government.

Constant did not say anything as he was placed into a police vehicle, where one officer held a cellphone up to Constant’s ear so he could talk to an unidentified person before he was taken away for questioning.

Constant was among 24 deported migrants who landed in the capital of Port-au-Prince, the fourth such flight since the COVID-19 pandemic began, said Jean Negot Bonheur Delva, director of Haiti’s migration office.

Some criticized his deportation and worried whether he would be held accountable for any of the charges he faces. Reed Brody, an attorney for Human Rights Watch known as the “dictator hunter,” told The Associated Press in a phone interview that Constant should be prosecuted somewhere.

“The worst solution for Haitians would be to have somebody like ‘Toto’ Constant with so much blood on his hands walking around,” he said. “It would just epitomize the impunity with which people have committed murder in Haiti for so long.”

Human rights groups have accused Constant of killing, raping and torturing Haitians when he became leader of the Front for the Advancement and Progress of Haiti after President Jean-Bertrand Aristide’s presidency was toppled in 1991. They allege that between 1991 and 1994, the group that Constant led terrorized and slaughtered at least 3,000 slum dwellers loyal to Aristide.

According to the San Francisco-based Center for Justice & Accountability, Constant had pictures of mutilated victims in his office and his group would perform facial scalpings and display them.

“Constant sought to cultivate a nearly supernatural mystique for FRAPH,” the center said.

When Aristide returned to power in 1994 with help from the U.S. military, Constant fled to the Dominican Republic and then entered the U.S. on Christmas Eve. He was ordered deported in 1995 but was allowed to remain in the U.S. because of instability in Haiti. In 2000, Constant was convicted in absentia in Haiti following a trial for the 1994 massacre in Raboteau, a shantytown in the northern coastal town of Gonaives where Aristide supporters were killed.

Constant kept a low profile while in the U.S. and lived with relatives in Queens, New York, until he was arrested in 2006 and later found guilty of fraud and grand larceny. In October 2008, he was sentenced at least 12 years in prison for his role in a $1.7 million mortgage fraud scheme.

Constant has repeatedly alleged that he was on the CIA’s payroll and that he is a scapegoat and would be killed upon his return to Haiti.

There were no protesters or supporters when he landed in Port-au-Prince or when he was taken to a jail cell shortly afterward. His attorney, Ronaldo Saint-Louis, told reporters that Constant was being held illegally.

“This is a country of injustice. We are going to fight for his right to be released,” he said.

Constant was expected to remain in jail overnight in a cell he was sharing with several other detainees. An Associated Press journalist overheard Constant asking them if they needed anything before he requested certain things from his attorney.

“I've been away for too long. Can you bring me some poisson gros sel?” Constant asked Saint-Louis, referring to a popular dish of coarse salt fish. He also requested deodorant, water and mosquito repellent, among other things.

U.S. legislators including Rep. Maxine Waters of California have said it would be “dangerously irresponsible” to deport Constant without a plan to prosecute him in Haiti and protect victims. Waters noted that Jean-Robert Gabriel, who also was convicted in absentia in the Raboteau trial, became a top official in Haiti’s military in 2018.

Marleine Bastien, executive director of the Miami-based Haitian nonprofit Family Action Network Movement, also decried Constant's deportation, saying it will only create more chaos. She said many of his friends remain in power and noted that judges in Haiti are on strike.

“Does the US government want to export more instability to an already vulnerable nation?” she said in a statement. "Given the rising number of COVID-19 cases in Haiti and in the US, deporting Constant now, and without a plan to prosecute him, is disgusting and dangerous.”

Brody, the human rights lawyer who worked in Haiti during the 1990s to prosecute human rights crimes, also said the U.S. was not a bystander when Constant rose to power.

“The U.S. has an obligation to ensure that the story ends better than it started,” he said.