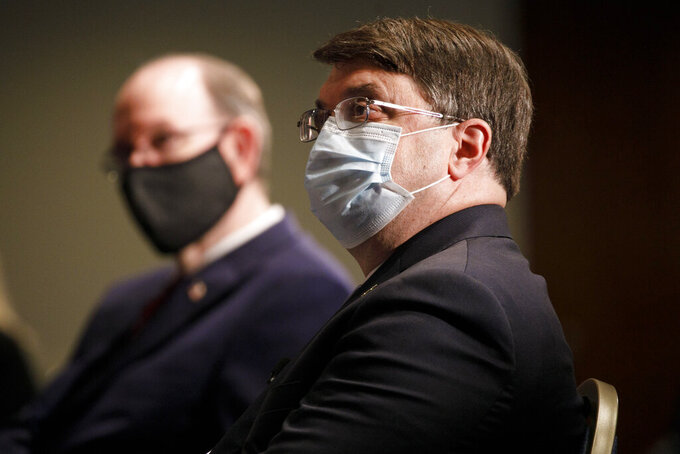 Secretary of Veterans Affairs Richard Wilkie, right, next to Under Secretary of Defense for Personnel and Readiness Matthew Donovan, left, wear protective masks against COVID-19, listen during a program to raise awareness on the risks of veterans suicide, Tuesday, July 7, 2020, at the National Press Club in Washington. (AP Photo/Jacquelyn Martin)

WASHINGTON (AP) — The federal government launched a broad national campaign Tuesday aimed at reducing high suicide rates, urging the public to reach out to others, especially during the coronavirus pandemic, and acknowledge daily stresses in people's lives.

Known as REACH, the government campaign is the core part of a $53 million, two-year effort announced by President Donald Trump to reduce suicide, particularly among veterans.

Starting Wednesday, digital ads will hit the internet with the key message that “suicide is preventable” and that collective action not only by government but also by businesses, schools, nonprofits and faith-based organizations can overcome the stigma of discussing mental health and empower people to understand risk factors, stay connected with others and talk openly about problems.

“Working together, we can implement this road map and end this national tragedy of suicide,” said Vice President Mike Pence’s wife, Karen Pence, a lead spokesperson for the government effort. She called it an opportune time, noting increased social distancing because of the coronavirus.

“All of us have been facing anxieties and isolation,” she said. “It’s OK to not be OK. ... The best thing is to talk about it more, not less.”

“No one should be afraid to ask for help,” she added.

Trump established a federal task force last year to develop a way to lower veterans’ suicides. Currently, about 20 veterans, guardsmen and reservists die by suicide each day, about 1.5 times higher than those who have not served in the military. The government says about 14 of those 20 were not under the care of the Department of Veterans Affairs, pointing to a need for improved community outreach.

With the coronavirus still raging across communities, officials expressed hope that the message of suicide prevention can aid the public more widely, not just veterans.

Surgeon General Jerome Adams, who is helping the effort, stressed the need to stay connected by texting, emailing or, in the case of his kids, writing “old-fashioned letters to grandma and grandpa.” He described stigma against getting help as a much bigger public health threat than cigarettes or COVID-19.

His public admonition comes as many governors are pushing for a national mandate on wearing masks. Trump has repeatedly declined to wear masks in public and recently held campaign-style events in Tulsa, Oklahoma, Mount Rushmore in South Dakota and the White House on the Fourth of July where he and many attendees went bare-faced.

“It’s not an impingement on your freedom,” Adams said, calling masks the No. 1 way to stem spread of COVID-19. “It actually increases your freedom and your choices because it lowers spread of the disease and increases the chances we will be able to open and stay open."

“It actually will decrease that hopelessness. It will actually lower suicide rates,” he said.

Public health experts urged people to go to the website wearewithinreach.net and take a pledge “to reach and be part of the solution" to stem suicide. The website offers information on risk factors for suicide and ways people can get help.

“By having this conversation, we will save lives,” said Dr. Barbara Van Dahlen, executive director of the suicide prevention effort.