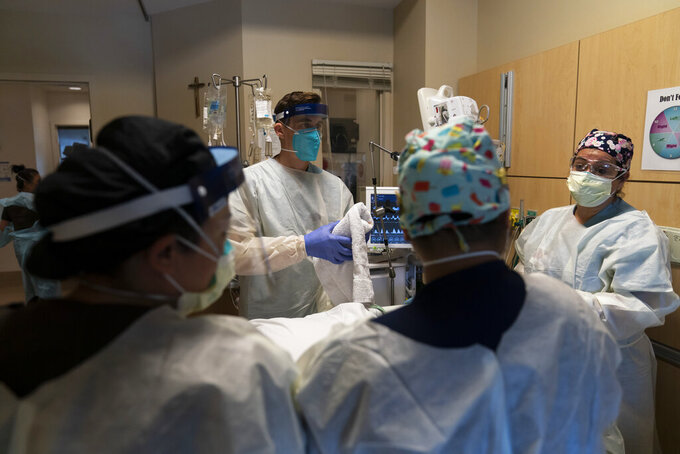 FILE - In this Nov. 19, 2020, file photo, medical personnel prepare to prone a COVID-19 patient at Providence Holy Cross Medical Center in the Mission Hills section of Los Angeles. California is desperately searching for nurses, doctors and other medical staff, perhaps from overseas, to meet demands as the coronavirus surge pushes hospitals across the state to the breaking point. With many of the state's hospitals running out of capacity to treat the severest cases, the state has brought in and deployed more than 500 extra staff but it needs a total of 3,000 temporary medical staff members. (AP Photo/Jae C. Hong)

SAN FRANCISCO (AP) — With so many states seeing a flood of coronavirus patients, U.S. hospitals are again worried about finding enough medical workers to meet demand just as infections from the holiday season threaten to add to the burden on American health care.

California, which is enduring by far its worst spike in cases and hospitalizations, is reaching out to places like Australia and Taiwan to fill the need for 3,000 temporary medical workers, particularly nurses trained in critical care.

“We’re now in a situation where we have surges all across the country, so nobody has many nurses to spare,” said Dr. Janet Coffman, a professor of public policy at the University of California in San Francisco.

Hospitals in some states have enlisted retired nurses and students. In Alabama, more than 120 students and faculty members from the University of Alabama at Birmingham’s nursing school began helping with care last week at UAB Hospital.

“I know our biggest concern is staff, even more concerned about that than physical beds and physical ICU units,” North Carolina Gov. Roy Cooper said Tuesday.

Elected leaders and health officials across the U.S. are asking people to stay home for the holidays while also trying show the public that the COVID-19 vaccines trickling out to health care workers and nursing home residents are safe.

A day after getting vaccinated on live television, President-elect Joe Biden said Tuesday that he has full confidence in the vaccine. He also thanked front-line workers, scientists, researchers and clinical trial participants while urging Americans to avoid large gatherings over the Christmas holidays.

Dr. Anthony Fauci, the nation’s top infectious disease expert, received the initial dose of the newest vaccine, produced by Moderna, alongside other federal health leaders who helped oversee its development.

Fauci told “Good Morning America” on Tuesday that he expects to start vaccinating the general population in late March or early April and that most Americans will have access to the injections by mid-summer.

Also on Tuesday, Dr. Deborah Birx, coordinator of the White House coronavirus response, said she planned to retire, but she is willing to first help Biden’s team as needed. Birx, in an interview with the news site Newsy, did not give a specific timetable on her plans.

The medical worker staffing shortages are happening as some states report a record number of deaths. Both Mississippi and West Virginia surpassed their previous highs for virus deaths reported in a single day on Tuesday while Arizona saw its second-highest daily increase during the pandemic.

In Tennessee, which is seeing the nation’s worst new COVID-19 infection surge per capita, the state health commissioner has warned that combining the Thanksgiving surge with another would “completely break our hospitals.”

Deaths in Florida’s nursing homes doubled during the Thanksgiving holiday, according to statistics gathered by AARP. The rise drew concern from advocates also worried about gatherings over Christmas and other year-end celebrations.

“There is nothing to celebrate. The national average is a catastrophe,” said Dave Bruns, the spokesperson for AARP Florida.

Much of California has exhausted its usual ability to staff intensive care beds. All of Southern California and the 12-county San Joaquin Valley to the north have been out of regular ICU capacity for days.

An emergency room physician in Los Angeles who helped set up a surge hospital last spring said there are no plans to reopen it. “There would be no way to staff it,” said Dr. Marc Futernick.

But the pool of available travel nurses is drying up as demand for them jumped 44% over the last month, with California, Texas, Florida, New York and Minnesota requesting the most extra staff, according to San Diego-based health care staffing firm Aya Healthcare.

Dr. Mark Ghaly, California’s Health and Human Services secretary, said the state is “lucky to get two-thirds” of its requests for travel nurses fulfilled right now.

It’s a sharp contrast from the spring, when health care providers from California flew to New York to help their overworked colleagues.

Ghaly said entire areas of California may run out of room even in surge capacity units “by the end of the month and early in January.” It’s trying to avoid that by opening makeshift hospitals in places like gymnasiums, tents and a vacant NBA arena, and sending patients to parts of the state with empty beds.

While larger hospital systems can stretch their staff, some smaller or unaffiliated hospitals do not have that ability and are a priority for state staffing assistance particularly with nurses and respiratory therapists, he said.

Sara Houze, a traveling cardiac intensive care nurse from Washington, D.C., began a new assignment this week caring for COVID-19 patients on the brink of death in San Bernardino, about 60 miles (97 kilometers) east of Los Angeles.

She said her online community of nurses is offering webinars about moral distress because many of them have had to change the way they care for patients.

“The patients that aren’t yet intubated, and even the ones intubated, aren’t getting the kind of nursing care that I want to give them because our resources are so limited and time is taxed,” she said. “It’s really disheartening.”

Associated Press reporters from around the U.S. contributed to this report.