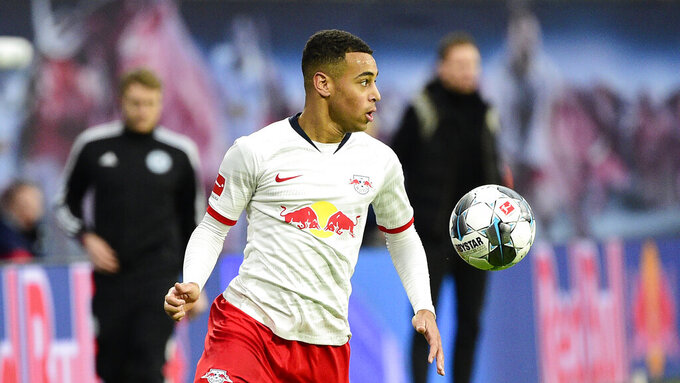 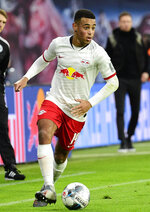 BERLIN (AP) — Tyler Adams picked the wrong time to be the fittest he’s been all season.

With the Bundesliga suspended indefinitely due to the new coronavirus outbreak, the 21-year-old from Wappinger, New York, is unsure when he will be able to play a competitive game for Leipzig again or even whether the season will be completed.

Adams injured a groin in Leipzig’s German Cup final loss to Bayern Munich last May 25 and did not come back until Dec. 21. He played five Bundesliga matches, then strained his left calf. He returned on March 10 to make his Champions League debut against Tottenham, setting up the last goal in Leipzig’s 3-0 win.

But the team hasn’t played since, and the Bundesliga doesn't know when the last nine rounds of games will be played.

“It’s been a bit of a whirlwind,” Adams said by video link on Friday.

He has been using the time off to complete what he calls his preseason, working on his fitness at home before training resumed in small groups at Leipzig’s ground.

“I’m really building up to my full capability,” Adams said. “Right now the body feels great, I feel fully recovered from any past injuries. My mental state is clear. I’m just focused on being able to play again.”

Germany has strict social distancing measures in place. Training is in in groups of three or four -– always while maintaining appropriate distance.

“It’s a little bit tricky. You can only do certain passing drills. You can do dribbling, you can do running and fitness, finishing. So you have all the individual variables of what it’s like to play in a game, but at the same time, it’s never gonna be 11 vs. 11, right now,” Adams said. “That’s the thing that hurts.”

New York has become a hotspot for the virus in the U.S. with more than 123,000 cases of COVID-19 registered and nearly 11,500 deaths by Friday, according to Johns Hopkins.

Adams worries about his family back home, but said it was fortunate they live an hour and a half outside the city.

“It’s not too, too bad there yet, but the numbers there are still increasing. It’s a scary thing. My parents have my brothers at home with them, keeping them occupied … but right now they’re safe,” the player said. “It’s hard. You miss your family, you hope everyone’s safe.”

Adams is among three 21-year-olds viewed as keys to the United States' hopes in the 2022 World Cup, joined by Chelsea's Christian Pulisic and Schalke's Weston McKennie. But they have played together just once with the national team because of injuries, in a March 2019 exhibition against Ecuador.

Adams joined Leipzig in January 2019 from Major League Soccer's New York Red Bulls and quickly established himself as a midfield starter. Despite Adams' injuries, Leipzig gave him a raise and last month extended his contract to 2025.

Bundesliga clubs were hoping to return to play in May without spectators, but this week the ban on large gatherings was extended to Aug. 31, affecting the start of next season, too.

Playing without fans wouldn’t be a problem for Adams, thinking back to his games in 2015 and '16 for Red Bulls II in the then third-tier United Soccer League.

"There were a lot of empty stadiums at the time,” he said. “Being able to go out and play would be a great feeling, but you only want to do so when it keeps everybody safe -– all the players, all the staff involved in running games, and of course the fans. If we continue to play with no spectators, and that keeps them safe, then I would be glad to do that.”

Adams is in regular contact with McKennie, Austria Vienna's Erik Palmer-Brown and other American players who are overseas.

“It’s been unique to see what they’re going through. For (Palmer-Brown) they haven’t even had the opportunity to train again. They haven’t even been able to leave the house for a run," Adams said. "Fortunately enough in Germany, we’re still able to get out.”