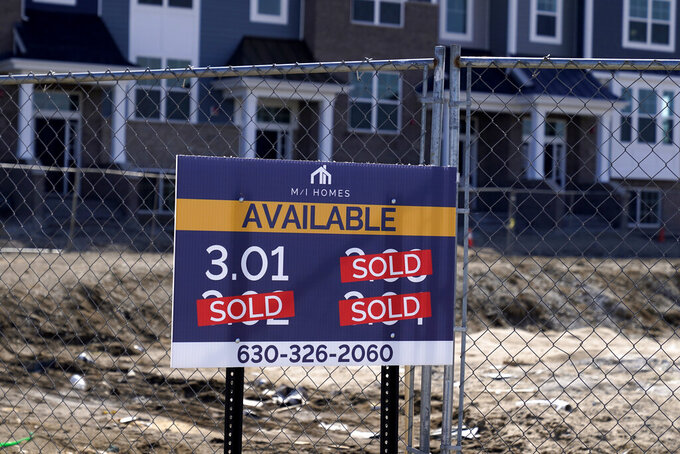 "Sold" signs are seen on a lot as new home construction continues in a new development in Northbrook, Ill., Sunday, March 21, 2021. On Thursday, May 13, 2021, Freddie Mac reported that mortgage rates declined during the week, marking their fourth consecutive week below 3% and further evidence of the strength in the economy’s recovery from the pandemic recession. (AP Photo/Nam Y. Huh)

WASHINGTON (AP) — Mortgage rates declined this week, marking their fourth consecutive week below 3% and further evidence of the strength in the economy’s recovery from the pandemic recession.

Mortgage buyer Freddie Mac reported Thursday that the average for the benchmark 30-year home-loan rate eased to 2.94% from 2.96% last week. At this time last year, the long-term rate was 3.28%.

Experts are expecting mortgage rates to increase modestly in the short term, while remaining at low levels in light of the Federal Reserve’s goal of keeping its key interest rate near zero until the economy recovers from the pandemic.

Federal Reserve Chairman Jerome Powell recently made clear that the central bank isn’t even close to starting a pullback in its ultra-low interest rate policies. This despite the economy’s rapid strengthening, inflation showing signs of picking up and the country making progress toward defeating the viral pandemic.

The acceleration in prices, which has been building for months, has unsettled financial markets and raised concerns that it could weaken the economic recovery. The government reported this week that a worrisome bout of inflation struck in April, with consumer prices for goods and services surging 0.8% — the largest monthly jump in more than a decade — and the year-over-year increase reaching its fastest rate since 2008.

The report from the Labor Department showed sharply higher prices for everything from food and clothes to housing. A 10% surge in the prices of used cars and trucks, a record jump, accounted for roughly one-third of last month’s overall increases.

The latest bright news came in a government report Thursday that the number of Americans seeking unemployment aid fell last week to 473,000, a new pandemic low and the latest evidence that fewer employers are cutting jobs as consumers ramp up spending and more businesses reopen. The decline — the fourth in the past five weeks — coincides with a raft of states led by Republican governors who have blamed expanded jobless benefits for a slowdown in hiring and are acting to cut off the additional aid.