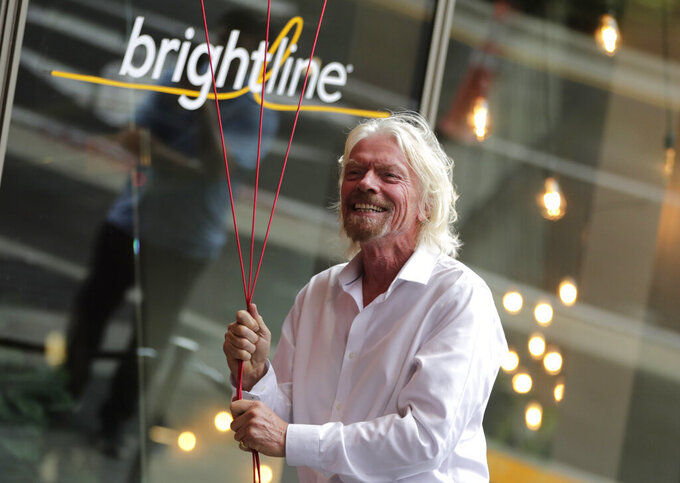 FILE- In this April 2019 file photo, Richard Branson, of Virgin Group, prepares to unfurl a banner during a naming ceremony for the Brightline train station, to be renamed as Virgin MiamiCentral in Miami. The partnership between Richard Branson's Virgin and the private Florida passenger train service Brightline, which began with the British entrepreneur's trademark pizazz, has ended quietly with a whimper. Brightline announced in a monthly report that it has ended its affiliation with the Virgin Group and will stop its rebranding to Virgin Trains USA. (AP Photo/Lynne Sladky, File)

FORT LAUDERDALE, Fla. (AP) — The partnership between Richard Branson's Virgin Group and the private Florida passenger train service Brightline has ended with a whimper, less than two years after it was celebrated with Branson's typical pizzazz.

Brightline announced in a monthly report that it has ended its affiliation with the Virgin Group and will halt its rebranding to Virgin Trains USA.

"Virgin no longer has any affiliation with us, our parents or its affiliate,“ Brightline said in the report released Friday that does not go into details about what led to the split. The report says Virgin may have objections to the plan.

Virgin has had several recent setbacks. Its Virgin Atlantic airline filed for bankruptcy protection in the U.S. last week after announcing a restructuring plan in the United Kingdom last month. It resumed flights last month after a three-month closure because of the coronavirus pandemic. It ended its Virgin Trains UK service in December after a 22-year run.

Because of the pandemic, Brightline suspended operations in March on its higher-speed service between Miami and West Palm Beach, but has continued laying track for its planned expansion to Orlando and its theme parks set for 2022. It is also working on a line that will connect Southern California and Las Vegas. It has no date set for resuming operations.

The companies had announced the partnership nearly two years ago and celebrated it with a rollout party in April 2019. Branson received a rock star's welcome at Brightline's new Miami station, which was soon rebranded with the Virgin name. He then rode with reporters and VIPs to West Palm Beach, the 70-mile trip taking just over an hour, where passengers swarmed him for selfies.

For Brightline, the first private passenger train service in the U.S. to launch in a century, the partnership was seen as a way to grab an internationally recognizable name plus a small, undisclosed investment. But that money never came, Forbes reported in June.

For Virgin, the partnership would give it a toehold in the U.S. passenger train market as it sought to expand its American holdings with a cruise line and hotels. Branson said Virgin would “sprinkle some of its magic dust” on Brightline and help it deliver an experience with some panache.

Brightline has been plagued with safety issues. An Associated Press investigation last December showed its trains killed more pedestrians and car drivers per mile than any railroad in the country — its 45 deaths when operations were suspended translates to one death every 31,000 miles. Most of the deaths have been suicides, while the rest were drivers and pedestrians trying to beat the train.

None of the fatalities have been deemed the fault of its engineers or trains. It has announced several initiatives aimed at reducing the fatalities, including adding more barriers along the tracks.