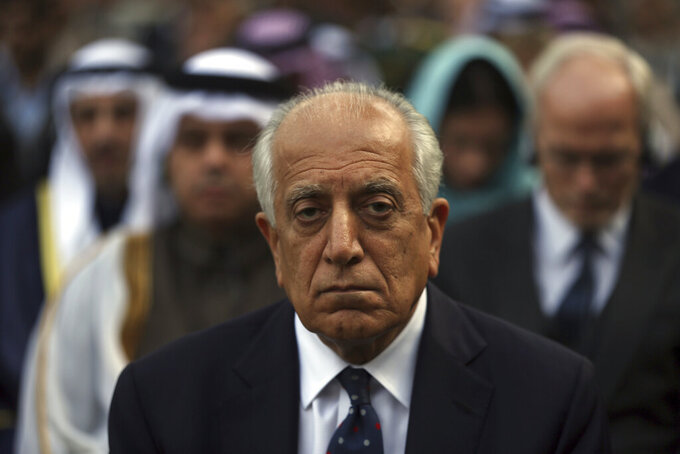 FILE - In this March 9, 2020 file photo, Washington's peace envoy Zalmay Khalilzad, attends Ashraf Ghani's inauguration ceremony at the presidential palace in Kabul, Afghanistan. According to a statement released Thursday, July 2, 2020, by the U.S. Embassy in Islamabad, Khalilzad told Pakistani officials that Afghanistan’s Taliban and Kabul’s political leaders were close to starting negotiations to decide the face of a post-war Afghanistan, a crucial next step in a U.S. deal signed with the Taliban in February. (AP Photo/Rahmat Gul, File)

ISLAMABAD (AP) — Washington’s peace envoy told Pakistani officials that Afghanistan’s Taliban and Kabul’s political leaders were close to starting negotiations to decide the face of a post-war Afghanistan, a crucial next step in a U.S. deal signed with the Taliban in February, according to a statement released Thursday by the U.S. Embassy in Islamabad.

Zalmay Khalilzad was in the region to pave the way for intra-Afghan negotiations expected to begin sometime this month. No date had been set, but Afghan President Ashraf Ghani said late Wednesday the first round would be held in Doha, where the Taliban maintain a political office.

Both sides must still release the remainder of prisoners laid out in the deal, which calls for the Afghan government to free 5,000 Taliban and the insurgents to release 1,000 government personnel. So far, the government has freed 3,500 and the Taliban about 700.

“Ambassador Khalilzad noted how close the sides are to starting intra-Afghan negotiations and the importance of resolving remaining issues quickly, underscoring the promise peace holds for regional stability and development,” the embassy statement said of his meetings in Pakistan with the army chief and foreign minister.

Earlier this week, U.S Secretary of State Mike Pompeo spoke to Taliban chief negotiator Mullah Abdul Ghani Baradar. In Monday's video call, Pompeo “made clear the expectation for the Taliban to live up to their commitments, which include not attacking Americans," according to the State Department.

Khalilzad's latest foray into the region comes as the White House is embroiled in a controversy over whether Russia paid bounties to Taliban-linked militants or drug dealers close to the Taliban to kill U.S. and NATO soldiers in Afghanistan.

U.S. President Donald Trump has denied knowing about the suspected bounties. Russia has called the charges nonsense and the Taliban said they have not needed financial incentives from foreign intelligence agencies to wage war against U.S. and NATO troops.

The New York Times first reported the bounties, which were confirmed by The Associated Press. U.S. intelligence officials also said they were looking at whether bounties were involved in the deaths of U.S. soldiers in early 2019, particularly, and an April 2019 attack that killed three U.S. soldiers, as well as in so-called insider attacks in which Afghan National Army soldiers turned on their U.S. allies and killed them.

Khalilzad was appointed in September 2018 to open direct peace talks with the Taliban, however until mid- 2019 both the United States and Taliban were locked in battle as both sides sought to improve their negotiating position with military victories. The killing of a U.S. soldier in a Taliban attack on the capital Kabul in in September 2019 prompted President Trump to declare peace talks with the Taliban dead.

They restarted in December and on Feb. 29 this year the deal was signed in Doha. At the time, the agreement was touted as Afghanistan's best chance at peace in decades of war.

The Taliban also said they would not attack U.S. and NATO troops but would continue their fight against Afghan National Security Forces. One of the first items on the agenda of intra-Afghan negotiations is apparently a permanent cease-fire.

Taliban political spokesman Suhail Shaheen said, however, that no talks will begin until all 5,000 Taliban listed in the agreement are freed. However, President Ghani on Wednesday said the government will announce on Sunday the final list of Taliban who will be released, suggesting some would not be freed and instead replaced by other prisoners.

The Taliban have said there could be no exceptions to the names on their list, which was approved by the U.S. during negotiations.

Khalilzad will hold videoconferences with Afghan leaders rather than travel to Kabul because of the dangers of the coronavirus pandemic. Afghanistan has recorded more than 32,000 infections but the real number is thought to be much higher.

Khalilzad, who was also in Uzbekistan was to also travel to Doha, where he is to meet Taliban negotiators.