As US piles up debt to aid economy, even usual critics cheer 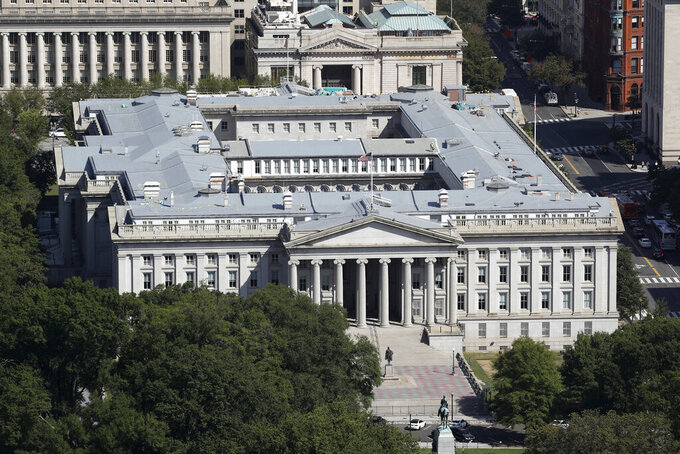 This Sept. 18, 2019 photo shows the U.S. Treasury Department building viewed from the Washington Monument in Washington. The Treasury Department says it will need to borrow a record $2.99 trillion during the current April-June quarter to cover the cost of various rescue efforts dealing with the coronavirus pandemic. Treasury said Monday, May 4, 2020 that the $2.99 trillion it plans to borrow this quarter will far surpass the $530 billion quarterly borrowing it did in the July-September 2008 quarter as it dealt with the 2008 financial crisis. The extraordinary sum of $2.99 trillion of borrowing in a single quarter dwarfs the $1.28 trillion the government borrowed in the bond market for all of 2019. (AP Photo/Patrick Semansky)

WASHINGTON (AP) — The U.S. government has opened the spigots and let loose nearly $3 trillion to try to rescue the economy from the coronavirus outbreak — a river of debt that would have been unthinkable even a few months ago.

And yet the response, even from people who built careers as skeptics of federal debt, speaks to the gravity of the crisis: Almost no one has blinked.

With the U.S. economy in a frightening free-fall, they say, the government has no choice but to pour trillions into an emergency operation. Doing less would risk a catastrophe — a recession that could devolve into a full-fledged depression. And if that were to happen, the government's fiscal health would end up far worse.

What's more, the lessons of World War II and the 2008 financial crisis suggest to many that a combination of ultra-low interest rates and eventual economic growth can keep government debts manageable and prevent a budget crisis.

In a sign that investors worry more about a deep recession than about whether the government might eventually struggle to repay its escalating debt, the yield on the benchmark 10-year Treasury note remains well below 1%. Many analysts say that while soaring federal debt may end up slowing an eventual recovery, there won't be any recovery if the government doesn't borrow and spend aggressively now.

Nonetheless, the numbers are shocking. After Congress passed four programs to sustain the economy through the COVID-19 crisis, the budget deficit — the gap between what the government spends and what it collects in taxes — will hit a record $3.7 trillion this year, according to the Congressional Budget Office.

On Monday, the Treasury Department announced that it will borrow $2.99 trillion in the April-June quarter, blowing away the previous quarterly record of $569 billion, set in the recession year of 2008, and eclipsing the $1.28 trillion it borrowed in the bond market in all of 2019. By the time the budget year ends in September, the government’s debt — its accumulated annual deficits — will equal 101% of the U.S. gross domestic product, according to the CBO.

Policymakers are trying to fend off catastrophe. The lockdowns and travel curbs meant to contain the virus are battering the economy. GDP is expected to fall at a 40% annual rate from April through June. That would be the worst quarter on record dating to 1947. Thirty million Americans have sought unemployment benefits since the virus struck.

Even before the health crisis, the government’s debt to the public, swollen by President Donald Trump’s 2017 tax cuts, amounted to more than 80% of GDP, highest level since 1950.

The nation has been here before. In 1946, the year after World War II ended, federal debt peaked at nearly 109% of GDP. By 1962, the debt burden had dropped below the 1940 level of 44% of GDP. The surging postwar economy poured tax revenue into government coffers.

In some ways, things are different now. The economy doesn't grow as fast. From 1947 through 1962, the economy averaged a robust, debt-erasing 3.5% annual growth. It's unlikely to achieve anything that impressive anytime soon. Since 2010, GDP growth has averaged just 2.3% annually.

Economists have long worried about the consequences of big government debts. When the government takes on debt, the argument goes, it competes with private borrowers for loans. It “crowds out’’ private investment, heightens borrowing rates and threatens growth.

But after the financial crisis, economists began to rethink their approach to debt. The recovery from the Great Recession, in the United States and especially in Europe, was sluggish in part because policymakers declined to juice growth with more debt. The 19 European countries that share the euro currency slid back into recession in 2011. As their economies slumped, their debt problems worsened.

In the United States, rates didn't rise much even as the economy gradually strengthened. It turns out investors have a near-insatiable appetite for U.S. Treasurys, given their status as the world’s safest investment. Their rush to buy Treasurys helped lower the government's borrowing costs. So did persistently low inflation.

In such a low-rate, low-inflation environment, the risk of piling on debt seems more manageable, at least for countries like the United States and Japan that borrow in their own currencies.

“We can worry much less about the amount of debt than most economists guessed,” said Douglas Elmendorf, a former CBO director and now dean of the Harvard Kennedy School who for years has been a critic of runaway federal debt.

Today’s U.S. policymakers enjoy the support of the Federal Reserve, which has been flooding the market with cash and keeping borrowing costs ultra-low. Fed Chairman Jerome Powell took the unusual step at a news conference last week of imploring Congress not to worry right now about the risk that its aggressive rescue programs will produce excessive debt.

“Put bluntly, public debt may have no fiscal cost... The probability that the U.S. government can do a debt rollover, that it can issue debt and achieve a decreasing debt to GDP ratio without ever having to raise taxes later, is high.’’

Then again, the future might not be like the recent past. Mark Zandi, chief economist at Moody’s Analytics, said he thinks rates will eventually start rising as the economy regains health, perhaps in 2022 or 2023.

But for now, he said, “You have to respond with everything you’ve got to make sure the economy doesn’t completely fall apart.’’

“The question is not: How much does this cost? But rather: How much will debt go up if we do this, versus if don’t do this?’’ said Richard Kogan, senior fellow at the Center on Budget and Policy Priorities and a budget adviser in the Obama administration.