US questions Maxwell's marriage in push to keep her jailed 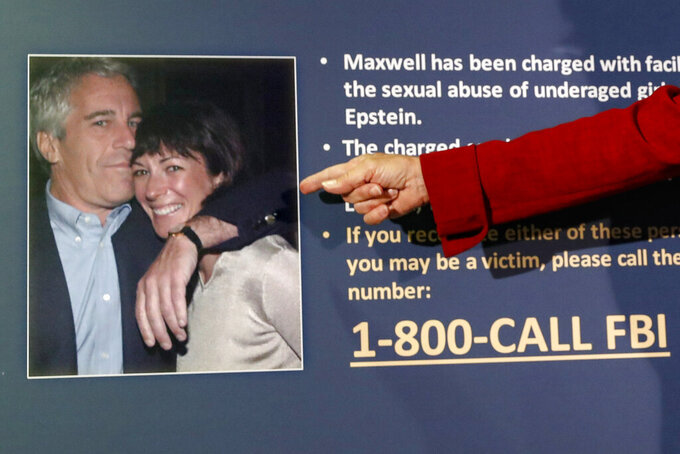 FILE - In this July 2, 2020, file photo, Audrey Strauss, acting U.S. attorney for the Southern District of New York, points to a photo of Jeffrey Epstein and Ghislaine Maxwell during a news conference in New York. On Tuesday, Nov. 24, one of Maxwell's attorneys said that her client is awakened every 15 minutes in jail while she sleeps to ensure she's breathing. (AP Photo/John Minchillo, File)

NEW YORK (AP) — Jeffrey Epstein’s longtime confidante Ghislaine Maxwell told court officials at the time of her arrest in July that she was “in the process of divorcing her husband,” a disclosure that prosecutors said undermines her argument that marriage will keep her in the U.S. if she is freed from jail.

Prosecutors highlighted Maxwell's divorce discussion in a 33-page response Friday to her lawyers' renewed pitch to spring her from a federal lockup in Brooklyn, where she awaits trial on charges she recruited at least three teen girls for Epstein to sexually abuse in the mid-1990s.

Born into wealth and high society as the daughter of a British publishing tycoon, Maxwell is now awakened frequently by guards to make sure she is breathing and her lawyers say she faces increased risk of contracting COVID-19 behind bars.

Maxwell's lawyers proposed in court papers this week that she instead await trial under a $28.5 million bail package, backed largely by her and her husband's assets, that would include armed guards to ensure she doesn’t flee a New York City residence.

Prosecutors noted in their response, however, that she'd be staying there with someone other than her husband. The person's name was blacked out in court papers. Maxwell’s husband has not been identified in court papers.

Maxwell, 58, remains an extreme flight risk as she faces charges that could put her in prison for up to 35 years if she's convicted, prosecutors said. In addition to the U.S. and United Kingdom, she also has citizenship in France, which does not extradite its citizens outside the European Union, they said.

Epstein, Maxwell's ex-boyfriend, killed himself in his cell at a Manhattan federal jail in August 2019, a month after his arrest on sex trafficking charges. He was 66.

Prosecutors said in their filing Friday that they are confident in the strength of the case against Maxwell, which they said will include extensive testimony from the three accusers, as well as corroborating documents and witness testimony.

Maxwell's lawyers have said that she “vehemently maintains her innocence" and is committed to remaining in the U.S. and defending herself.

All three women Maxwell is alleged to have recruited for Epstein as girls want her to remain in jail pending trial, prosecutors said. One of them, Annie Farmer, wrote in a letter accompanying the prosecution’s response that she didn’t think they would ever see justice if Maxwell were released.

“She has lived a life of privilege, abusing her position of power to live beyond the rules,” Farmer wrote. “Fleeing the country in order to escape once more would fit with her long history of anti-social behavior.”

The Associated Press does not identify alleged victims of sexual abuse unless they have given permission to be named publicly, as Farmer has done.

Maxwell's first attempt to get out on bail, shortly after her arrest, was rejected.

Federal agents keeping tabs on Maxwell after Epstein's arrest tracked her to a wooded New Hampshire estate she purchased a year ago for $1 million. Her friends and family insisted in letters submitted to the court that she sought seclusion there after receiving death threats and worrying the public and media would find her at a home where she lived with her husband.

A financial report included among court exhibits in Maxwell's case said she and her husband married in 2016 and that she put the majority of her assets into a trust he controlled. Those assets were worth $22.5 million on Oct. 31, the report said.

Maxwell still has access to more than $4 million in unrestrained funds, prosecutors said citing the financial report. She owns a $2 million townhouse in London, has hundreds of thousands of dollars worth of jewelry and access to some of a $7 million retainer paid to her lawyers, prosecutors said.

Adding to Maxwell's marital intrigue, prosecutors said, she and her husband both listed their marital status as “single” on bank forms they filled out to establish a trust account about two years ago.

Prosecutors urged the judge, Alison Nathan, to give little weight to the involvement of Maxwell's husband in seeking her release from jail given that he refused to come forward at the time of her arrest.

“While a friend’s desire to avoid publicity may be understandable, a spouse’s desire to distance himself in that manner — particularly when coupled with the defendant’s inconsistent statements about the state of their relationship — undermine her assertion that her marriage is a tie that would keep her in the United States,” prosecutors wrote.