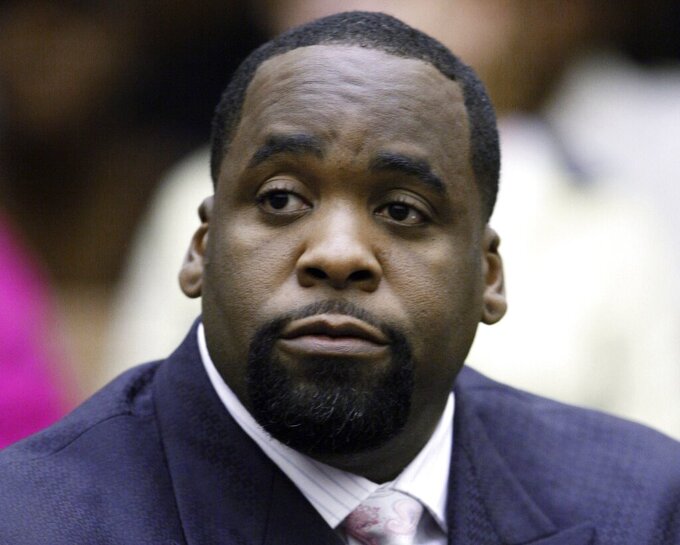 FILE - In this May 25, 2010 file photo, former Detroit Mayor Kwame Kilpatrick sits in a Detroit courtroom. Rev. Trump has commuted the prison sentence of Kilpatrick, who has served about seven years of a 28-year sentence for corruption. The announcement Wednesday morning, Jan. 20, 2021, was part of a flurry of clemency action in the final hours of Trump’s White House term. (AP Photo/Paul Sancya, File) 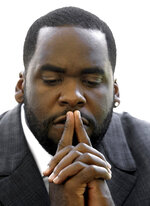 The announcement came in a flurry of clemency action in the final hours of Trump's White House term that benefited more than 140 people, including rappers, former members of Congress and other Trump allies.

The White House said prominent members of the Detroit community had supported the 50-year-old Democrat's commutation and noted: “During his incarceration, Mr. Kilpatrick has taught public speaking classes and has led Bible Study groups with his fellow inmates.”

Kilpatrick's sentence was reduced but his 24 felony convictions still stand. He is still on the hook for $195,000 owed to the Internal Revenue Service and $1.5 million to Detroit.

The Rev. Keyon Payton said after being released from a minimum security prison in Oakdale, Louisiana, Kilpatrick likely would go to Atlanta to reunite with his mother, sister and other family members.

In 2013, Kilpatrick was convicted of racketeering conspiracy, fraud, extortion and tax crimes. The government called it the “Kilpatrick enterprise,” a scheme to shake down contractors and reward allies.

While Detroit’s finances were eroding, he was getting bags of cash from city contractors, kickbacks hidden in the bra of his political fundraiser and private cross-country travel from businessmen, according to trial evidence. Kilpatrick said he was sorry if he let his hometown down but denied ever stealing from the citizens of Detroit.

Kilpatrick’s lawyers had asked for a 15-year sentence, but U.S. District Judge Nancy Edmunds agreed with prosecutors and ordered an extraordinary 28-year term.

"He is a notorious and unrepentant criminal,” Schneider said of Kilpatrick.

With credit for good behavior, Kilpatrick had been listed for release from prison in 2037. His request for home confinement during the coronavirus pandemic was turned down in May.

Payton said he and others gave a packet of information to a Trump aide, Ja’Ron Smith, during a January 2020 meeting in Detroit. He said Trump also was influenced by Alice Marie Johnson, who was freed from a life sentence in 2018.

“She has worked very, very hard, not just for Kwame’s clemency but for a number of persons,” Payton said.

Detroit Mayor Mike Duggan, a Democrat and frequent Trump critic, welcomed the news of a commutation.

“Kwame Kilpatrick is a person of great talent who still has much to contribute,” Duggan said. “I know how close he is to his three sons and I could not be happier for them being together again. This is a decision President Trump got right.”

Kilpatrick’s first term as mayor was marred by accusations of misuse of city funds on personal extravagance. Nonetheless, he was reelected in 2005 and Detroit’s financial footing continued to erode during his second term.

Often wearing diamond earring studs and a wide-brimmed fedora, Kilpatrick reveled in the title of the city’s “Hip-Hop Mayor.” The image later dogged the married mayor when he found himself in a text-messaging sex scandal with his chief of staff.

Those messages led to a criminal investigation in 2007 and state charges accusing Kilpatrick of perjury, obstruction of justice and misconduct in office. He resigned as mayor in 2008 before serving more than a year in jail and state prison.

During a live television speech following his resignation in 2008, Kilpatrick took responsibility for his actions and left the door open for a return to public life: “I want to tell you, Detroit, that you done set me up for a comeback. I truly know who I am. I truly know where I come from. In Detroit, I know who I am. And I know because of that, there’s another day for me.”

Adolph Mongo, a strategist who worked on Kilpatrick’s 2005 reelection campaign, said he had hoped for his release.

“Trump is out of his mind, but he’s probably the only one who would do it,” Mongo said.

“Ten years — that might have been enough but 28 years is ridiculous,” he said.