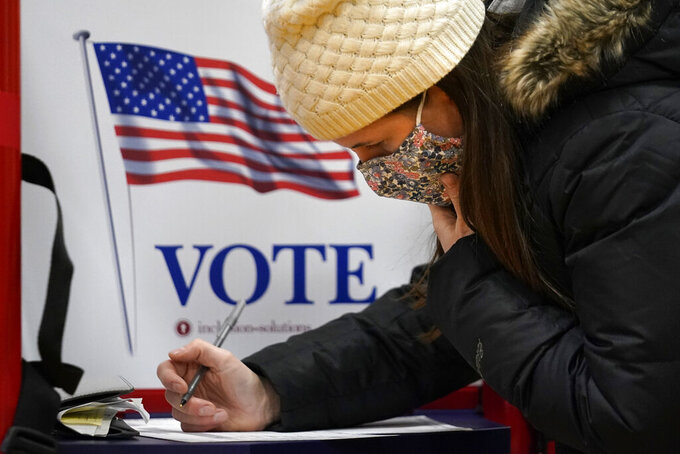 Pingree was first elected to the House in 2008. The 1st Congressional District she represents, which includes Portland, is the more heavily Democratic of Maine’s two congressional districts.

Allen is a physician who ran a campaign that included a denouncement of mask requirements amid the coronavirus pandemic.

Polls closed at 8 p.m. Election Day looked different in Maine this year because of the coronavirus pandemic, and many Mainers already had voted. All told, more than 500,000 had voted by absentee ballot before Tuesday, but there were still long lines in some locations.

In Portland, volunteers gave away hand warmers as the temperature hovered in the upper 30s and a line snaked around a building at one polling location. Many waited more than an hour to vote but said it was worth it to ensure that their ballots didn't get lost in the mail.

“I chose to vote in person because even though I trust our system and trust absentee voting, I still feel like I’m not taking any risks at all. If I have to stand in line, I stand in line,” said Jennifer Davies, 52, of Portland, as flakes floated down. “And now it's snowing!”

“If there’s one thing that people can agree on, advocates of the progressive left or the far right, I think they agree the stakes are incredibly high in this election,” said Mark Brewer, a political scientist at University of Maine.

Ranked choice voting, approved by Maine voters in 2016, is often called an “instant runoff” since the goal is to achieve a majority winner without a second, runoff election.

But there’s nothing instant about the process in Maine. If there’s no majority winner, then all of the ballots will be shipped to Augusta and entered into a computer for additional tabulations. That process takes about a week.

The views on ranked choice voting have become partisan in Maine, especially after 2018, when Republican U.S. Rep. Bruce Poliquin was ousted in Maine’s 2nd Congressional District under the system, even though he had the most first-round votes.

The Maine Republican Party launched a petition drive aimed at stopping the expansion of the voting system to the presidential contest through a “People’s Veto” referendum. The GOP then unsuccessfully sued after coming up shy of the necessary signatures, and was rejected twice by the Maine Supreme Judicial Court and once by the U.S. Supreme Court. The final rejection came after the first votes already had been cast.

Maine is the only state to approve ranked voting for statewide races, and its constitutionality has twice been upheld by a federal judge in Maine. It was used for the first time in U.S. House and U.S. Senate races in 2018 in Maine. But it isn’t used in state gubernatorial or legislative races because of concerns that it runs afoul of the Maine Constitution.