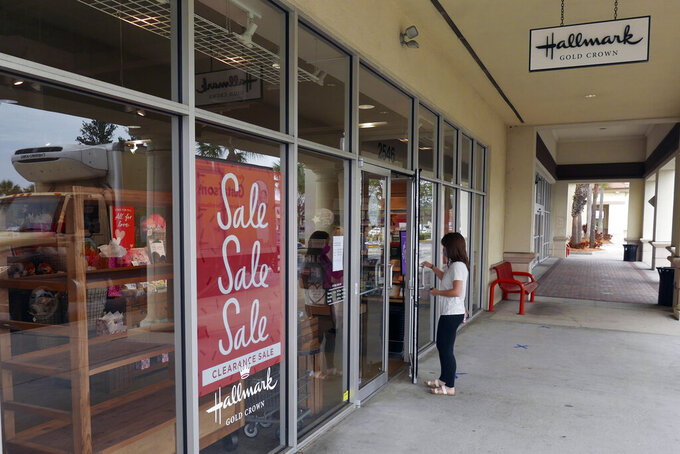 A sale sign is displayed near the entrance of a Hallmark store Tuesday, Jan. 12, 2021, in Orlando, Fla. Retail sales fell for a third straight month, as a surge in virus cases kept people away from stores and restaurants during the holiday shopping season. The report released Friday is yet another sign that the pandemic is slowing the U.S. economy. Last month, the country lost jobs for the first time since the spring.(AP Photo/John Raoux)

NEW YORK (AP) — Americans cut back on spending in December for the third-straight month as a surge in virus cases kept people away from stores during the critical holiday shopping season.

The U.S. Commerce Department said Friday that retail sales fell a seasonally adjusted 0.7% in December from the month before, a decline Wall Street analysts weren't expecting. Sales also fell in October and November, even as retailers tried to get people shopping for Christmas gifts early by offering deals before Halloween.

Friday’s report covers only about a third of overall consumer spending. Services such as haircuts and hotel stays, which have been badly hurt by the pandemic, are not included.

The unexpected decline underscores the economy’s troubles as the pandemic has worsened this winter. Employers shed jobs last month for the first time since April. And layoffs appear to be continuing, as the number of people seeking jobless benefits jumped last week to the highest level since August.

That’s left many Americans with less to spend. But the recent $600 stimulus checks sent to most Americans is expected to boost the economy in the coming months. And as vaccines are more widely distributed, economists expect the economy to rebound at a healthy pace in the second half of this year.

The Commerce Department said sales even fell online, down nearly 6% after rising 19% for the year.

That may be due to Amazon, which held its annual Prime Day sales event in October this year for the first time, which likely pushed people to shop earlier in the season and spend less in December, analysts at Wells Fargo Securities said. Walmart, Target and Best Buy followed Amazon's lead, offering competing discounts to coincide with Prime Day.

At restaurants and bars, sales fell 4.5% in December as states restricted in-person dining, ending the year down 21%.

It wasn't all bad news: Sales at home improvement stores continued to rise, up 0.9% last month after growing 17% for the year, as people spruced up their houses as they quarantined. But the biggest increase was at gas stations, likely due to a rise in gas prices and holiday-related road trips, which pushed sales up 6.6% after falling 12% for the year.

The National Retail Federation, which represents Walmart, Macy's and other big retailers, painted a rosier picture of the numbers. The nation’s largest retail trade group said that when car, restaurant and gas sales are taken out, and when non-seasonably adjusted numbers are compared from a year ago instead of month to month, sales in November and December actually rose 8.3% from the year before.