US stocks open higher, on track for solid gains for the week 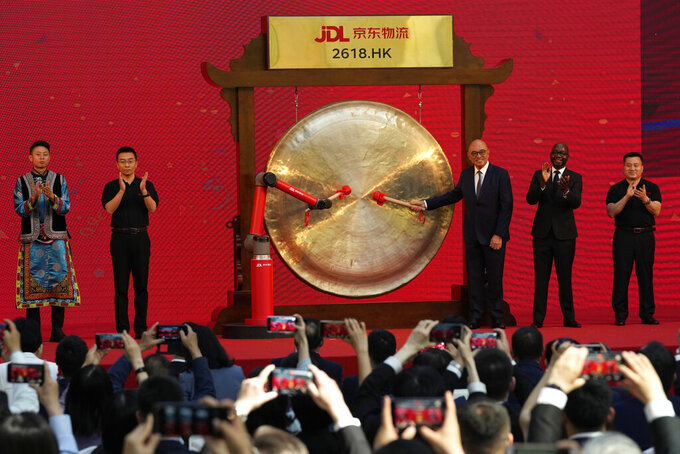 Willie Tan, an executive officer of Skechers Greater China, and customer of JD Logistics sound the gong together with a robot arm at a a ceremony to observe virtually the listing of JD Logistics on the Hong Kong stock exchange from JD.com headquarters in Beijing on Friday, May 28, 2021. JD Logistics' shares jumped 14% in their trading debut Friday in Hong Kong. The company is a subsidiary of Chinese e-commerce giant JD.com. It is the latest technology company to list in the semi-autonomous Chinese city as Beijing intensifies scrutiny of the technology sector. (AP Photo/Ng Han Guan)

Stocks are opening higher on Wall Street, keeping major indexes on track to post their first weekly gain in three weeks. The S&P 500 was up 0.3% in the early going Friday, led by gains in technology and health care companies. Traders will be closely watching for news out of Washington, where President Joe Biden is expected to release details later Friday of his $6 trillion budget proposal for next year. Treasury yields were mostly unchanged after a closely watched reading on consumer inflation came in a bit above forecasts. The yield on the 10-year Treasury note held steady at 1.60%.

Shares in Chinese online retail giant JD.com Inc.’s logistics arm rose 3.3% on their first trading day in Hong Kong after the company raised 24 billion Hong Kong dollars ($3.1 billion) by selling a portion of the unit to outside investors.

JD Logistics Inc. is the latest technology company to list in the semi-autonomous Chinese city as Beijing steps up scrutiny of the industry. Its IPO was the second largest for the market this year after short video firm Kuaishou raised $5.3 billion.

Markets were lifted by mostly positive reports. The number of Americans who filed for unemployment benefits fell yet again to a pandemic low of 406,000.

The “optimism around U.S. economic data is boosting the recovery theme and may potentially spur some catch-up growth in Asia indexes, considering that they have been lagging," Jun Rong Yeap of IG said in a commentary.

The benchmark was on track for a gain this week of about 1%. It hit an all-time high on May 7th but then fell for two straight weeks.

Bond yields have nudged upward this week. The 10-year U.S. Treasury note was trading at a yield of 1.61% on Friday, up from 1.57% on Wednesday. But it has remained around that level for the last two weeks.

In other trading, U.S. benchmark crude oil gained 9 cents to $66.94 per barrel in electronic trading on the New York Mercantile Exchange. It picked up 64 cents to $66.85 on Thursday. Brent crude, the international pricing standard, picked up 3 cents to $69.23 per barrel.