US tennis player Opelka back to winning after bout of COVID 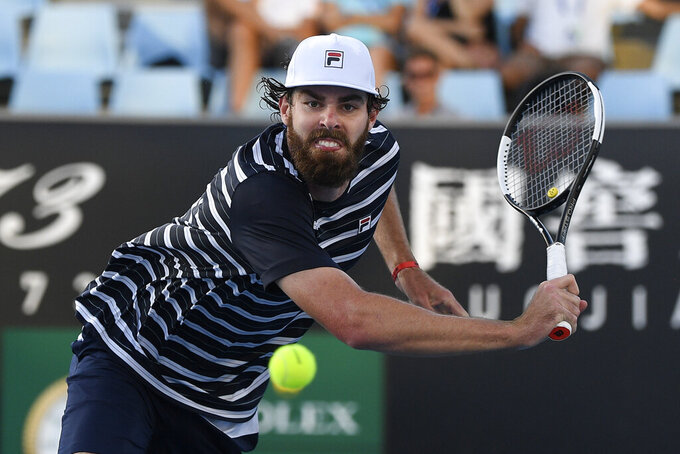 FILE - American Reilly Opelka makes a backhand return to compatriot Taylor Fritz during their second round match at the Australian Open tennis championship in Melbourne, Australia, in this Wednesday, Feb. 10, 2021, file photo. Opelka is back to winning matches at the Italian Open after dealing with a bout of COVID-19 that he said kept him off the court entirely for more than two weeks and prevented him from practicing the way he usually does for nearly a month.“It felt like a rough flu,” Opelka said in a telephone interview Tuesday, May 11, 2021, from Rome, where he beat Lorenzo Musetti of Italy 6-4, 6-4 to reach the round of 16 at the clay-court tournament. (AP Photo/Andy Brownbill, File)

American tennis player Reilly Opelka is back to winning matches after dealing with a bout of COVID-19 that he said kept him off the court entirely for more than two weeks and prevented him from practicing the way he usually does for nearly a month.

“It felt like a rough flu,” Opelka said in a telephone interview Tuesday from Rome, where he beat Lorenzo Musetti of Italy 6-4, 6-4 to reach the round of 16 at the clay-court Italian Open. “Definitely put me out completely for five days. And then I stayed home for another 10 or 11 days, at least.”

The 47th-ranked Opelka has back-to-back victories — he beat Richard Gasquet 6-1, 7-5 in his opener — after arriving in Italy on a six-match losing streak that included a first-round exit at the Miami Open in March.

It was after that tournament that he got sick; he described himself as “pretty symptomatic” for five days.

“Took about three or four weeks for me to feel like my energy was normal and to be able to train and practice four hours a day,” said Opelka, a 23-year-old who is based in Florida. “Now? Now I would say that I’m fully recovered. There’s some rust and just some soreness here and there, because I missed out on (so much) work. But my body is feeling pretty good at the moment.”

Good enough to produce 41 aces in his past two matches, with 23 against Musetti.

“I’ve served well. I’ve hit my forehand really well. And, honestly, I’m moving really well. So those three things are really working for me right now,” the 6-foot-11 Opelka said. “I’ve put a lot of work in after a rough start to the year.”

Taylor Fritz, an American ranked 31st, is friends with Opelka and shares a physiotherapist with him.

“I heard he was feeling a bit rough,” Fritz said Tuesday after his rain-interrupted 6-3, 7-6 (5) loss to No. 1 Novak Djokovic in Italy. “I probably FaceTimed Reilly every other day to just ask him how he was doing and talk to him.”

Next up for Opelka at a tournament many players use to prepare for the French Open, which begins May 30, will be either second-ranked Daniil Medvedev or No. 27 Aslan Karatsev.

Medvedev is a two-time Grand Slam finalist, including at the Australian Open this year, and Karatsev began this year outside the Top 100 before his surprising run to the semifinals at Melbourne Park as a qualifier.

“Pretty rare that a guy who, all of a sudden, at age 27, kind of had his best year and kind of comes out and physically is one of the strongest tennis players I’ve ever seen,” Opelka said about Karatsev. “His body is like no other tennis player’s build. His physique is nothing I’ve ever seen before.”