US watchdog: Afghan gov't weakened ahead of Taliban talks 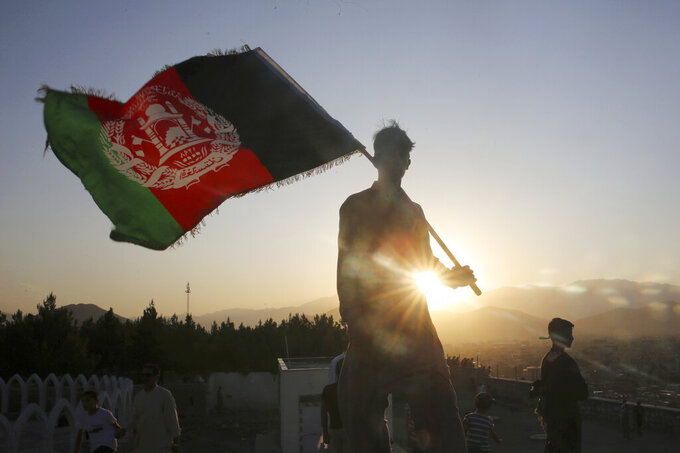 FILE - In this Aug. 19, 2019, file photo, a man waves an Afghan national flag during Independence Day celebrations in Kabul, Afghanistan. Washington’s watchdog warns, Thursday, June 25, 2020, that “systemic” corruption within the Afghan government is weakening its bargaining position in future peace negotiations with the Taliban, even as the insurgent group's political spokesman says the group was ready with its agenda for talks. (AP Photo/Rafiq Maqbool, File)

ISLAMABAD (AP) — A U.S. watchdog warned that “systemic” corruption within the Afghan government is weakening its bargaining position in upcoming peace negotiations with the Taliban, even as the insurgents said Thursday they were ready and had compiled their agenda for the long-awaited talks.

John Sopko, Special Inspector General for Afghan Reconstruction, said the Taliban and other militants underscored the government's corruption, using it to “undermine public support for the government, garner recruits to their cause, and weaken the government’s bargaining position during future peace negotiations.”

“It is the most insidious threat the Afghan government faces because it saps the support of citizens who are trying to go about their daily work, feed their families, and live free of fear and intimidation,” Sopko told a monitoring group known as Integrity Watch Afghanistan on Wednesday.

Meanwhile, about 50 civil society activists in Kabul rallied on Thursday against corruption, urging the International Monetary Fund to rescind a $220 million loan given last month to the Afghan government to help mitigate the impact of the coronavirus pandemic. Afghanistan has reported over 30,000 cases, including 675 deaths, but testing is severely limited, and experts say the number of infected is likely much higher.

Sopko criticized Afghan President Ashraf Ghani’s government, saying it only paid lip service to fighting corruption, “ticking off the boxes” rather than implementing changes and arresting some of the worst offenders.

“The private sector and particularly international investors – who care far more about their own bottom line – will not overlook Afghanistan’s failure to tackle the corruption challenge,” he said. “Afghanistan’s leaders must come to realize that in the end, private sector investment will matter far more to their country’s future than international donors, because after 19 years of war, foreign governments, including the United States, are growing weary of paying Afghanistan’s bills.”

Ghani's spokesman, Sediq Sediqqi, objected to Sopko's criticism, insisting that “the government has done a lot to tackle corruption and that has to be seen.”

No date has yet been set for negotiations but Deborah Lyons, the U.N. special representative to Afghanistan told the U.N. Security Council on Thursday that she was “cautiously optimistic" the talks could start in July in Doha, Qatar, where the Taliban maintain a political office.

One of the obstacles to the start of the negotiations has been the exchange of prisoners, envisaged under a deal the Taliban signed with the United States at the end of February. That accord — and the Afghan-Taliban talks that were meant to follow — are seen as Afghanistan’s best chance for peace and an opportunity for U.S. and NATO troops to leave the war-torn country after nearly two decades of fighting.

The Taliban's political spokesman, Suhail Shaheen, told The Associate Press that the Afghan government has so far released 3,500 Taliban prisoners. The U.S.-Taliban deal calls for 5,000 Taliban prisoners to be freed by Kabul. It also said the Taliban should free 1,000 government personnel, including military men, they hold captive.