US women beat Finland 4-1, to face Canada in Olympic final 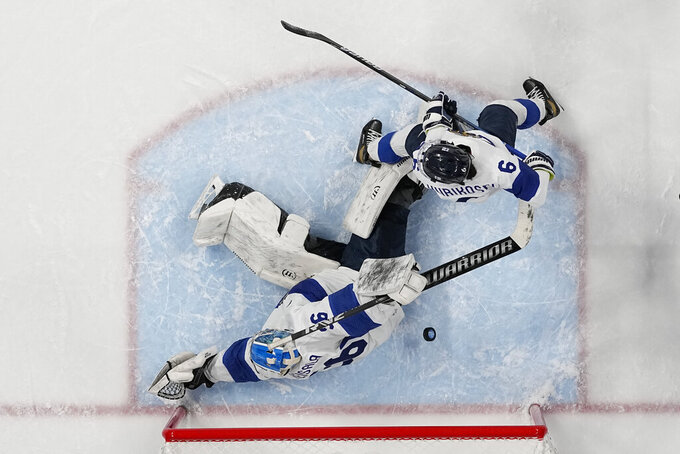 A shot by United States' Cayla Barnes gets past Finland goalkeeper Anni Keisala (36) and Jenni Hiirikoski (6) for a score during a women's semifinal hockey game at the 2022 Winter Olympics, Monday, Feb. 14, 2022, in Beijing. (AP Photo/Petr David Josek)

BEIJING (AP) — Hilary Knight could think of no better way to close the Beijing Games women’s hockey tournament than a rematch between the United States and — who else? — Canada with the gold medal on the line.

During an Olympic tournament criticized for lacking parity because of too many lopsided scores — and big on predictability with the U.S. and Canada once again dominating — the title will be fittingly settled between the world’s two major powers on Thursday. It will mark the next chapter in a fierce rivalry which dates to the Americans defeating Canada at the 1998 Nagano Games, the first to feature women’s hockey.

“You know, I think it’s wonderful hockey. It’s the most beautiful rivalry in sports,” Knight said after scoring a goal and adding an assist in the United States' 4-1 semifinal win over Finland on Monday. “It gets the best and the worst out of both of us at the same time. And it’s just a wonderful game.”

Canada advanced earlier in the day when it erupted for five first-period goals over an Olympic record span of 3:24 in a 10-3 win over Switzerland.

The matchup will mark the sixth time out of seven Olympics in which the U.S. and Canada have met for gold. The lone exception was the 2006 Turin Games, when Canada defeated Sweden after the Swedes eliminated the Americans in the semifinals.

While the Americans are the defending Olympic champions following a 3-2 shootout win at the 2018 Pyeongchang Games, Canada is considered the favorite in Beijing. The Canadians have steamrolled through the tournament with a 6-0 record, in which they’ve outscored opponents 54-8, including a 4-2 win over the U.S. in the preliminary round finale last week.

Canada captain Marie-Philip Poulin, who scored two goals against the Swiss, said it made no difference who her team faces in the final.

“We worked for these moments. We’ve been working for four years,” Poulin said. “I think we deserve it.”

Canadian player Sarah Nurse, however, was looking forward to renewing the rivalry one more time.

“Obviously, playing the U.S. it’s always an exciting game, always an exciting rivalry,” said Nurse, who had four assists. “Our biggest focus is we get to play another game at the Olympics. We came here to play seven games. We wanted the last one to be the gold-medal game.”

The Americans will be there waiting to meet them.

Cayla Barnes had a goal and assist while Hayley Scamurra and Abby Roque, with an empty-netter, also scored against Finland. Alex Cavallini stopped 25 shots and had her shutout bid end on Susanna Tapani’s goal with 26 seconds remaining.

Finland will face Switzerland in the bronze-medal game on Wednesday in a repeat of the same matchups from the world championship tournament in August, when Canada beat the U.S. 3-2 in overtime of the championship game. Finland won bronze with a 3-1 win over the Swiss.

Barnes opened the scoring 3:39 into the second period against the Finns by pinching in from the right point to convert Hannah Brandt’s pass through the crease for a power-play goal. The tripping called against Tanja Niskanen was questionable after it appeared the U.S. player fell on her own.

Finland coach Jusso Toivola did his best to be diplomatic in questioning the penalty.

“Do I have to answer?” Toivola said. “I don’t normally talk about refs, but I didn’t like that call.”

What he also didn’t like was the difficulty his team had in containing the Americans’ speed during the second period.

Knight, playing in her U.S. women’s team record-tying 21st Olympic game, scored the eventual game winner with 1:07 remaining in the second. Savannah Harmon’s initial shot was blocked, and Knight got to the loose puck to the left of the net and snapped it in for her 11th career Olympic goal, tying Jenny Potter for third on the U.S. list.

The Canadians have been the tournament’s most dominating team by raising the bar in how the women’s game is played with a four-line deep, relentlessly attacking style of offense.

“I think we’re taking the game to new heights right now,” Nurse said. “We’re playing a style of hockey that’s never been seen in our tournament before. And so, in 5-10 years, other countries are going to be playing our style of play, and we’re going to keep pushing the envelope and keep making our sport better.”

The five goals scored in under 3 1/2 minutes broke the previous record set by the Canadians in 2010, when they scored five times in a 4:03 span in a 13-1 win over Sweden.

“We just had a blackout for four minutes,” he said. “You can’t give them that momentum because they’re just like sharks when they smell blood. And when they taste it, they’re going.”

Unlike the high-scoring Canadians, the U.S. has struggled with finishing chances while also playing without top-line center Brianna Decker, who broke her leg in a tournament-opening 5-2 win over Finland.

The struggles continued Monday following a scoreless first period in which the Americans had a 12-6 edge in shots. Keisala got her right pad out to make a spread-eagled stop on Amanda Kessel driving in on a breakaway, while Kelly Pannek was stopped trying to jam in a loose puck from atop the crease.

The Americans outshot the Finns 42-26.

The U.S. ranks fifth out of 10 teams in scoring efficiency with 28 goals on a tournament-leading 334 shots. The Americans' power play ranks fourth in converting six of 26 opportunities.