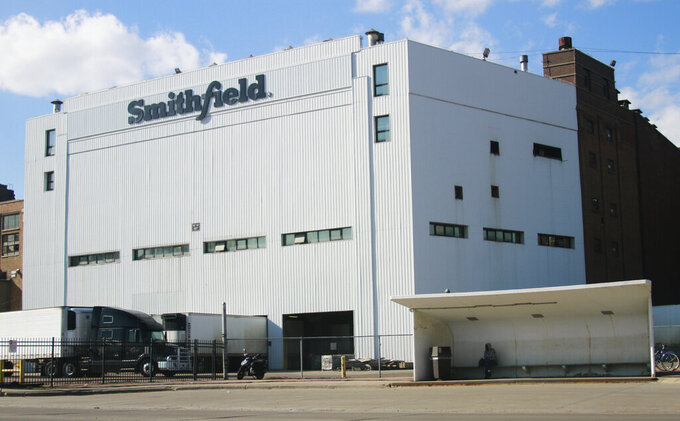 FILE - This April 8, 2020, file photo shows the Smithfield pork processing plant in Sioux Falls, S.D. The USDA said on Wednesday, May 26, 2021, it will not increase the speed at which pigs are processed into meat at U.S. pork plants rejecting a request from a group representing pork producers to allow processing plants to speed up the production of pigs into meat. A union representing workers claimed that the increased volume endangers workers. (AP Photo/Stephen Groves, File)

DES MOINES, Iowa (AP) — The U.S. Department of Agriculture has declined a request by the pork industry to increase the speed at which pigs can be processed into meat, delivering a victory to slaughterhouse workers who had raised safety concerns about the plan.

The USDA announced Wednesday evening it would enforce a Minnesota judge's order issued in March. The judge struck down plans begun years ago but finalized by the USDA under former President Donald Trump's administration that would have lifted maximum line speeds at pork slaughterhouses, allowing dozens of plants to speed up production.

The United Food and Commercial Workers Union International, which represents 33,000 workers in the pork processing industry, welcomed the decision.

“President Biden made a commitment to strengthen safety protections for America’s meatpacking workers on the frontlines of this pandemic. With today’s USDA statement, the Biden administration is reaffirming its commitment to worker safety,” union president Marc Perrone said Wednesday.

The USDA's decision followed a March 31 ruling by U.S. District Judge Joan Ericksen, who had considered a lawsuit filed by the union and found the USDA acted arbitrarily and capriciously when it refused to consider the impact of faster line speeds on worker safety. Ericksen ordered the rule to be vacated but delayed the effective date for 90 days to give the USDA and the industry “time to prepare for any operational change.”

The National Pork Producers Council, a group representing pig farmers, this week asked the USDA to appeal the ruling, seek a stay while the appeal is considered and request the agency pursue a fast-tracked rule that would allow higher line speeds.

In a statement posted Wednesday on its website, the USDA said pork processing plants should prepare to revert to previous maximum line speeds as of June 30.

“The agency is committed to worker safety and ensuring a safe, reliable food supply. We will work with the establishments to comply with the court’s ruling and minimize disruptions to the supply chain,” the USDA said.

Pork processing plants in Hatfield, Pennsylvania; Coldwater, Michigan; Fremont, Nebraska; and Austin, Minnesota, have been working with the faster line speeds under a pilot project for years, and a plant in Guymon, Oklahoma, began faster speeds in 2019. Several others were expected to adopt faster speeds but plans were delayed by the pandemic.

The pork producers group had said the judge’s ruling would force plants already operating at faster speeds to return to the previous maximum line speed of 1,106 hogs per hour, significantly less than the 1,450 hogs per hour some plants were processing.

In a statement, NPPC spokesman Jim Monroe said the organization is disappointed with the USDA decision “to support a flawed federal district court decision," adding that “irreparable harm will be exacted on small U.S. hog farmers when this court order goes into effect at the end of June 2021.”

The group earlier said the judge’s ruling will cut U.S. pork packing plant capacity by 2.5% and result in more than $80 million in reduced income for small hog farmers, according to an analysis conducted for the group by Iowa State University agricultural economist Dermot Hayes.

The group said it will pursue all avenues to reverse the court decision.

The Washington-based North American Meat Institute, a trade group for the meat processing industry, said the judge’s ruling could have significant unintended consequences, including that “workers who will now have increased workloads as companies attempt to make up for lost production.”

Hayes, in his analysis said some plant managers have told him they may add longer shifts or weekend work to keep up the production pace at slower rates.

The impact on consumer prices for ham, pork chops and bacon isn't immediately clear and will depend on how the industry responds. If the slower speeds cause processors to supply less pork to the market, “grocers and restaurants are left competing against each other for a small amount of pork, which would drive up wholesale and retail pork prices,” said Jayson Lusk, head of the department of agricultural economics at Purdue University.