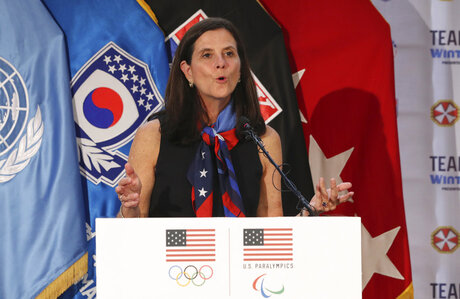 By: EDDIE PELLS (AP)
DENVERCopyright 2020 The Associated Press. All rights reserved. This material may not be published, broadcast, rewritten or redistributed.
39.7392-104.985

In nine years on the job, Baird broadened and reshaped the USOC's marketing arm, cutting deals with Procter and Gamble, Ralph Lauren and Nike, among others, and partnering with the International Olympic Committee to get, and keep, a number of its biggest sponsors, including Toyota, Bridgestone and Visa.

As one measure of her success, the USOC reported $121 million in sponsorship "royalties" in 2016 compared to $94 million in 2008 — nearly a 30 percent increase over an eight-year period, the first part of which was dogged by a slow economy.

Baird also built a digital platform for U.S. Olympians and made Team USA the brand name for all American Olympians and Paralympians.

"I always believed the focus should be on the athletes and the sports, and that created a focus on Team USA as the brand," Baird said in an interview with The Associated Press. "That's what it's about. It's not about the USOC."

Baird leaves with the USOC under fire for its handling of a mushrooming number of sex-abuse cases in Olympic sports. CEO Scott Blackmun resigned six months ago.

"There are a lot of organizations, sports and otherwise, that come through crises stronger than ever," Baird said. "It's a matter of digging in and remaining true to yourself. I have a lot of faith in the board and how seriously it is tackling some of these issues."

Earlier this month, she became head of the marketing arm created by the LA 2028 Olympics organizing committee. Once LA won the right to host the 2028 Games, LA organizers took over most of the marketing duties previously held by the USOC, and will retain them through those games.

When she arrived in 2009, the USOC was in a period of turmoil much like today, but for different reasons.

The board had recently ousted CEO Jim Scherr in favor of Stephanie Streeter, whose tenure didn't last long. Chicago had finished last in the voting to host the 2016 Olympics, in large part because of a fractured relationship between the IOC and USOC.

Baird's departure wasn't unexpected, given that the USOC marketing department has been all but disbanded and replaced by a similar structure in Los Angeles.

Baird, who lives in New York, said she wanted to do something different.

"There was something about New York Public Radio," she said. "This is a city I care a lot about. And New York, and the United States, needs public media now more than ever."

Baird joined the USOC at a time when it was considering starting its own Olympic network, much to the chagrin of NBC and the IOC, which had different plans. Over the years, Comcast acquired NBC and the USOC got on board with the creation of the IOC's Olympic Channel, which features Team USA programming and ads.

It's one of several platforms on which the Team USA logo is featured.

"The Olympic movement in the U.S. is a really hard movement to orchestrate smoothly," Baird said. "I was part of a team — the team behind the team. We accomplished a lot because we moved things ahead as a team, and that's not easy to do."