Utah brewers are feeling the effects of year-old beer law 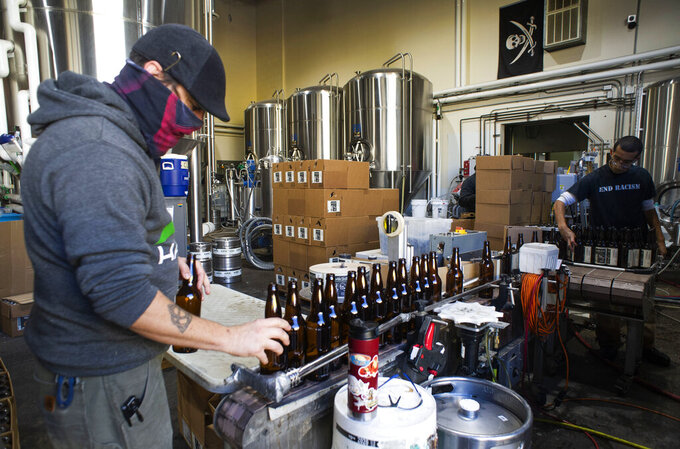 SALT LAKE CITY (AP) — Over the past year — ever since Utah rewrote its century-old alcohol laws and allowed stronger beer in grocery stores — beer aisle winners and losers have emerged.

Consumers who for the first time since Prohibition can buy cold beer that is 5% alcohol-by-volume in a retail outlet are among the triumphant, the Salt Lake Tribune reports.

Joining them are large brewers like Anheuser-Busch and MillerCoors that are no longer bound by the old 4% ABV (or 3.2% by weight) limit and can stock a variety of previously banned beers on the shelves.

Why, even the state Legislature has received kudos from drinkers — who often disagree with the state’s conservative alcohol policies — for bringing the beer selection closer to par with other states.

That leaves only one group in the loser’s circle: Utah beer brewers.

Since Nov. 1, 2019, Utah’s craft brewers have watched their liquor store sales drop by more than 40%. They’ve also paid the state more in excise taxes. The price per barrel jumped from $12.80 — already the highest in the nation — to $13.10 when the law went into effect.

“It’s worse than I thought it would be,” said Peter Erickson, co-founder of Epic Brewing Co. in Salt Lake City. “Even before COVID, we laid off 25 people, mostly due to the lost sales at the DABC (Department of Alcoholic Beverage Control) stores.”

Epic is likely one of the hardest hit, as its business model focuses on mostly heavy beers that are 5% ABV or higher. Under state law, those stronger beers must still be sold in state-run liquor stores and are subject to a 66.5% markup.

But others, like Uinta Brewing Co., have experienced similar declines, said president Jeremy Ragonese. The damage has been easier to manage, though, as the company has a larger out-of-state market “and is not as reliant (on liquor store sales) as some of the smaller local brewers.”

Ragonese said the state of Utah beer brewers has been exacerbated by the pandemic. Beer sales dropped again when bars and restaurants closed to prevent the spread of the coronavirus. And businesses that have reopened are not operating at full capacity.

All combined, Ragonese said, “small local brewers who relied almost entirely with taproom and the DABC channel have really struggled.”

The Utah Brewers Guild actually predicted a large drop in sales when the beer law was first proposed.

The guild fought the plan, arguing that raising the maximum alcohol content of grocery store beer to 5% ABV only benefited the mega brewers. But the argument carried little weight with lawmakers, the majority of whom are members of The Church of Jesus Christ of Latter-day Saints and do not drink alcohol for religious reasons.

And it angered many consumers.

One year in to the new law, consumer response is mixed. Some feel that grocery stores like Harmons and Whole Foods have created a good mix of small craft beers and national brands.

“We’ve noticed breweries like T.F. Brewing and Kiitos have a much better shelf presence,” said Annie Harwood Anthony of Sandy. “The biggest ‘win’ for us ... is that Harmons now sells our favorite light beer, Montucky Cold Snacks.” (She served the Montana beer at her wedding.)

“I now buy beer at grocery stores where I never did before,” said Tom Lerner of Park City. “The Whole Foods by me carries Grid City and Level Crossing beer that I like and I can’t get down to the (Salt Lake City) breweries very often, so it’s a plus.”

Others beer buyers are less enamored — saying that most of what’s available in grocery stores is from big, national brands.

“(In) the first few months, the selection in the stores changed a lot,” said Taylor Mackert of Springville. “But now they’ve settled into the same old stuff. They still have too much space devoted to the national brands — and seltzers.”

“The raise in ABV has not caused me to buy more beer in the grocery stores, mainly because the shelf space is controlled so much by the big macro beer companies,” he said. Pressure from the distributors forces stores to give “less and less space to small local independent breweries that make beer that is far superior to the big companies.”

More than 100 heavy beers — many top sellers — moved out of the Utah liquor stores with the law change. And it’s had an impact on the DABC’s bottom line, said executive director Sal Petilos.

The losses tally into the millions, Petilos told the state liquor commission this week, “but we are not going to get a realistic view of the impact until December. That’s when we can compare apples to apples.”

Loss of heavy beer is one factor. But liquor purchases at restaurants and bars are down 60% because of the pandemic. Additionally, the DABC reduced hours at some stores because of staff shortages, said Petilos. This month, those stores are expected to extend their operating hours.

While the stronger beer law hasn’t helped some brewers or the DABC, grocery stores have benefited from the change, said Dave Davis president of the Utah Food Industry Association.

“At the retail level, we are seeing sales increase,” he told the Legislature’s Beer Availability Working group last month. But exact percentages are difficult to calculate because the pandemic has increased overall grocery sales in 2020.

We don’t need a stronger beer to understand that.