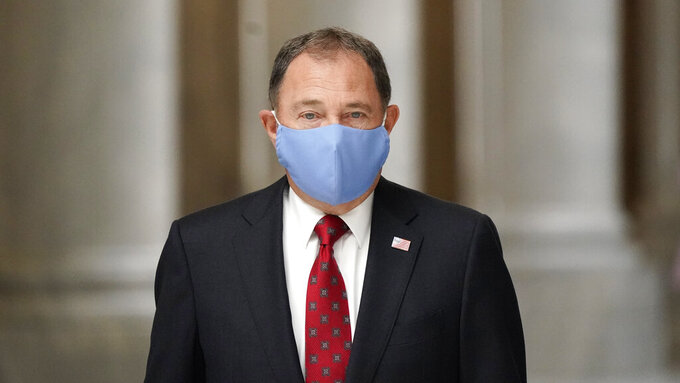 Herbert is imposing new restrictions in the cities of Provo and Orem that will limit social gatherings to 20 people starting Wednesday. The state health department is granting one exception to the new rules that will allow team sports, but without spectators.

The cities are in Utah County, where cases have grown by 81% in the last week, said Dr. Angela Dunn, the state epidemiologist. The county accounted for 42% of the state’s cases despite having only 20% of state’s population.

Local leaders are considering a countywide mask mandate, but the state has not set a deadline for how quickly they must make that decision, Herbert said. The county's sole face-covering mandate is in the city of Provo.

Many of the new cases are being driven by college-age students in Utah County, home to Brigham Young University and Utah Valley University. The two colleges issued a joint statement Tuesday warning students that they may implement “more dramatic action” or even close campuses if case numbers do not improve over the next two weeks.

The governor said he's trying to use “a scalpel approach instead of a shotgun approach.” But he warned that he may consider increasing restrictions across Utah County if new case rates continue to rise.

“We’re hoping to do it in a way that cuts out the cancer, but doesn’t kill the patient," he said.

Herbert, a Republican, has urged residents to wear masks for months but has stopped short of ever implementing a statewide mask mandate. He has instead allowed counties to decide if they needed bans.

There have been 65,000 reported virus cases in Utah, and 443 people have died, according to state data. The number of infections is thought to be far higher because many people have not been tested, and studies suggest people can be infected with the virus without feeling sick.