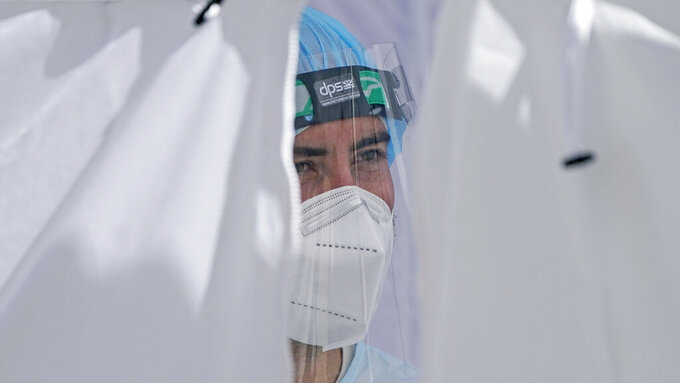 A National Guardsman looks on at the Utah National Guard's mobile testing site for COVID-19 Thursday, Nov. 12, 2020, in Salt Lake City. The state recorded 3,919 new confirmed cases of the coronavirus, which brought the seven-day average of new daily cases to 2,738. In the past week, Utah's positivity average has increased from 19.5% to 23.2%, according to state data. (AP Photo/Rick Bowmer)

SALT LAKE CITY (AP) — As coronavirus cases and hospitalizations in Utah continue to shatter records, one of the state’s largest hospital systems is adding nearly 200 traveling nurses to keep staffing levels up, including some from hard-hit New York City, hospital officials said Thursday.

The state’s hospitals are well into their contingency care protocols, and some have effectively reached 100% ICU capacity, said Greg Bell, president of the Utah Hospital Association. Hospitalizations rose with a record 468 COVID-19 patients, and ICU beds reached 83% occupancy statewide, according to state data.

"If the population who is not masking and distancing does not start doing that I’m very fearful as to where we’re going to be in a couple months," said Dr. Katie Thomas, associate medical director for Intermountain Medical Center.

The Intermountain Healthcare hospital network sent 100 caregivers to New York City-area hospitals during the state’s initial surge of COVID-19 cases in April. Now a group of 31 NewYork-Presbyterian nurses has volunteered to work at Intermountain Medical Center and LDS Hospital in Salt Lake City for two weeks.

“I decided to come to Utah because I wanted to pay it forward to the front line workers who left their homes to aid us at our time of need,” Wen Hui Xiao, a NewYork-Presbyterian Hospital nurse told reporters during a briefing. “It was really vital and essential to us, and we are so thankful."

The state recorded 3,919 new confirmed cases of the coronavirus, which brought the seven-day average of new daily cases to 2,738. In the past week, Utah’s positivity average has increased from 19.5% to 23.2%, according to state data.

State epidemiologist Dr. Angela Dunn has said that such a high positivity rate indicates the number of infections is far higher.

“With our record case counts today... it should cause us all to take stock in what are we doing individually to help do our part to slow this spread down,” said Gov. Gary Herbert.

There have been over 143,000 reported virus cases in Utah and 687 known deaths related to the virus, according to state data.

— Top officials from the Church of Jesus Christ of Latter-day Saints are asking local leaders to scale back some of their in-person services and to “be vigilant in maintaining well-known safety measures.” Weekly Sunday worship services can still be held. But the new guidelines limit the number of permitted participants to 99. The church's announcement comes days after the governor put forth a statewide mask mandate that exempted religious services.