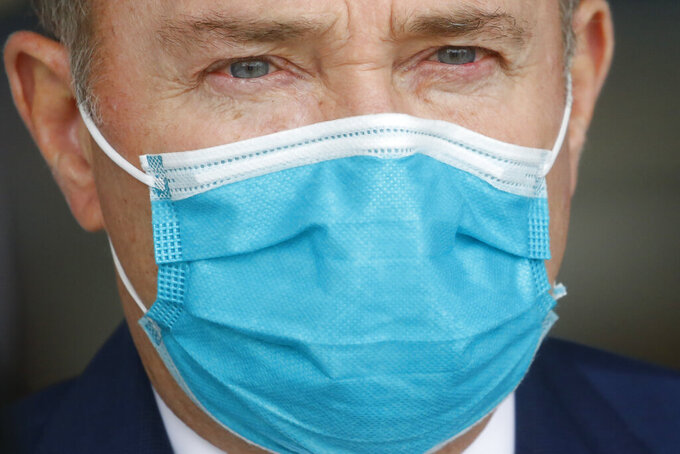 The newest plea came one day after Republican Gov. Gary Herbert said he will require masks in schools as they reopen in the fall, but stopped short of a statewide mandate. He said Friday as Utah recorded another one-day record of confirmed cases that he'll consider a mandate if his repeated pleas for the voluntary use of masks do not quickly slow the case count.

“The really simple part of the equation has always been wearing a mask,” said Dr. Thomas Miller, chief medical officer at University of Utah Health.

Hospital leaders from three companies warned that their beds are filling up and they are fearing an onslaught that will soon overwhelm facilities.

About 67% of the state's intensive care unit beds were occupied as of Friday, up from 59% in mid-June, state health department figures show.

Utah has reported more than 28,000 confirmed virus cases and 207 confirmed deaths since the pandemic began. Case counts have more than doubled since mid-May when state leaders allowed some businesses to reopen, including on Friday the state's highest one-day mark of 867.

"It’s a little difficult for me to understand as a physician who sees firsthand the toll this virus is taking on our state’s health systems why as a state we haven’t taken action," Miller said.

More than 20 states have required some form of mask-wearing statewide to prevent the spread of the virus. Several conservative-leaning states have implemented statewide measures, including Texas, Kansas and West Virginia.

Herbert has instead encouraged voluntary compliance statewide and instructs counties and cities to request his permission if they think a mask mandate is necessary. He has approved them in and around Salt Lake City, as well as around popular tourist destinations such as Summit and Grand counties and the city of Springdale.

Herbert called Friday's case count “disturbing" and said he will consider issuing stronger measures, including a mask mandate, if case numbers do not decrease by Aug. 1.

Herbert has also received sharp criticism even while limited mandates were implemented as many staunch opponents have said requiring face coverings is a violation of personal liberties. A rural county commissioner last month compared Herbert to Adolf Hitler in a social media post after he gave approval to two counties to mandate masks.

For most people, the new coronavirus causes mild or moderate symptoms, such as fever and cough that clear up in two to three weeks. For some — especially older adults and people with existing health problems — it can cause more severe illness, including pneumonia, and death.

If that doesn't happen, Stenehjem said it's going to be difficult to allow children to return to school full time in August.