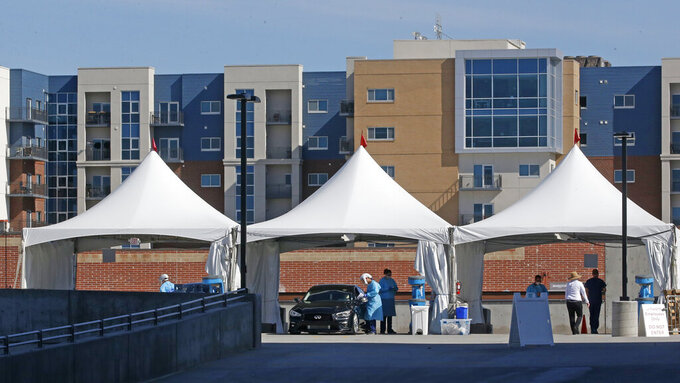 Healthcare workers perform COVID-19 Testing at University of Utah's Sugar House Health Center Monday, April 27, 2020, in Salt Lake City. Utah's testing numbers also surpassed 100,000 on Monday, April 27, 2020, with about 4,500 new tests performed. The state is now capable of testing up to 9,000 people daily, but despite the expanded criteria, has been seeing demand under capacity with an average of 4,000 to 6,000 people getting tested daily. (AP Photo/Rick Bowmer)

People who fail to report a “suitable offer” to return to work and stay on unemployment may be forced to pay back funds that have been higher than normal during the COVID-19 pandemic because of additional $600-a-week checks from the U.S. government.

“Unemployment benefits can serve as an important and helpful tool for dialing the economy back up, but they must be used correctly," Pierpont. said.

Officials in several states including Iowa and Oklahoma have issued similar warnings this week that workers who refuse to return to work will fall under a category known as voluntary termination and become ineligible for unemployment.

Gov. Gary Herbert acknowledged he's concerned that some people might not want to look for work because they're making decent money on the double unemployment benefits from the state and federal government during the pandemic.

“It doesn’t take probably a lot of rocket science to figure if you’re making more money on unemployment maybe you are not quite as desperate to go back to work,” Herbert said. “We'll just have to live through that. I think most people want to work.”

Labor groups have demanded safe working conditions and in some states requested that unemployment rules be changed to allow people with preexisting health conditions to decline job offers and still receive unemployment.

Last week's total was still historically high. The claims filed each of the past six weeks were more than any single week on record, including during the height of the Great Recession in 2009 when the high was about 5,000 in one week, state figures showed.

A total of nearly 137,000 people have requested unemployment since March 15 as the pandemic forced businesses to close. The staggering figure easily surpassed yearly totals for each of the last five years when the state averaged about 73,000 claims a year, state figures show.

For most people, the coronavirus causes mild or moderate symptoms, such as fever and cough, that clear up in two to three weeks. For some, especially older adults and people with existing health problems, it can cause more severe life-threatening illness, including pneumonia, and death.

— One of Utah's longest-running parades scheduled for July 24 to celebrate the state’s Mormon heritage at Pioneer Day has been canceled. Days of ’47 Parade officials say the parade and accompanying rodeo, concert, pageant and other events were all postponed. The celebration is one of the state’s oldest dating back to 1847.

— The Church of Jesus Christ of Latter-day Saints will begin sending out missionaries who were brought home from foreign countries to new assignments in their home countries. The church said Thursday that new mission assignments are going out and some young people in the United States and Canada will leave starting next week. The Utah-based faith sent thousands of young missionaries to their home countries to self-isolate as the COVID-19 pandemic spread around the world. It's unknown how long the young people will spend in the new assignments. Male missionaries normally serve two years while women serve 18 months.